Carrier Aggregation is a key feature of LTE-Advanced, allowing a network provider to merge multiple LTE (4G) carrier bands. This lets them boost peak user data rates as well as the overall capacity of their network. Here, we’ll be taking a look at the scenario of Carrier Aggregation in Nepal alongside its availability.

What is Carrier Aggregation?

As aforementioned, it is one of the key features that LTE can serve its user base. It combines two or more LTE carrier bands into a single data channel to increase the capacity of the network and the data rates by exploiting fragmented spectrum allocations.

Before we enter into how it works, let me give you a short overview of network carriers. These carriers, in simple terms, are a network band with a specific frequency range in the radio frequency (RF) spectrum. These frequencies are used by devices to communicate with one another. Initially, network operators only used a single band to send and receive data, which took a long time to complete the process. LTE has up to six available bands or frequencies that the operators can use. They are: 1.4 MHz, 3 MHz, 5 MHz, 10 MHz, 15 MHz, and 20 MHz. Despite the availability of six frequency bands, we can only use a limit of five of them at once, resulting in a maximum aggregated bandwidth of 100 MHz.

Furthermore, when two carriers are taken into use, we call it 2CA. Similarly, if there are three or four carriers, the abbreviation is 3CA or 4CA, respectively. The more the component carriers, the better will be the data speed.

Let us now learn the prerequisites for using CA in Nepal.

So far, we already know that there are six LTE bands available. Your telecom operator should now support at least two bands available to allow CA for different handsets. Ncell only has one LTE band in Nepal, rendering Carrier Aggregation in its network impractical.

However, simply endorsing the network band does not qualify the device for Carrier Aggregation. Moreover, the phone itself should support CA from the chipset level. It is supported in phones operated by Qualcomm chipsets with an X5 modem or later. Furthermore, phones powered by MediaTek, Kirin, or Exynos chipsets support carrier aggregation as well.

Unfortunately, smartphone makers, on the other hand, disable CA at the software level. For instance, despite having supported SoCs, some Realme and Xiaomi phones do not support CA.

In the meantime, let me make it clear that if you’re using a phone made specifically for the Indian market, they won’t support CA in Nepal. This is due to the fact that such smartphones do not accept Band 20 (B20). As a result, those smartphones won’t be able to aggregate usable NTC bands.

How to check if a phone supports Carrier Aggregation? 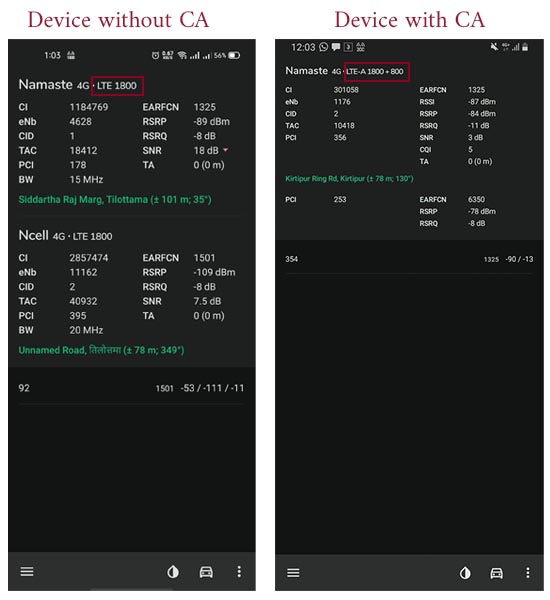 On top of expanding network coverage area, telecom operators in Nepal should also look into enabling features such as carrier aggregation for providing better cellular connectivity throughout the country. But in Nepal, this isn’t happening. They are mostly concerned with broad branding and advertising in order to draw in more consumers.

The key argument we are trying to make here is that the network providers should also concentrate on building a reliable infrastructure across the country. Plus, Nepal Telecommunications Authority (NTA) should also regulate the import of smartphones such that only the ones supporting all carrier bands supported in the country hit the Nepali market.