Home Reviews Samsung Galaxy A33 5G Review: Not Quite There Yet 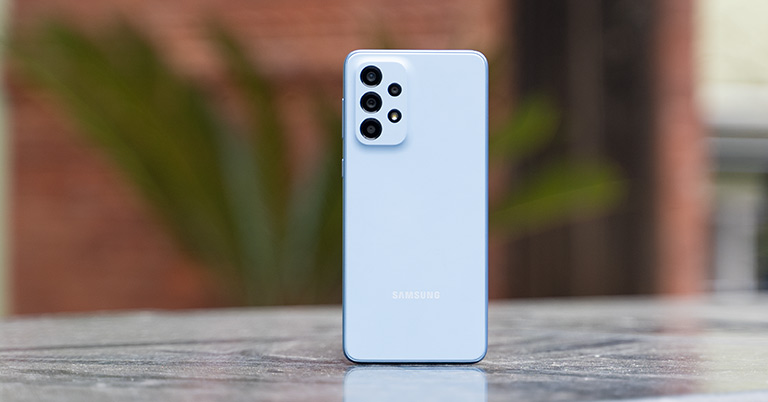 Ok kicking things off with the design side of things, like other higher-end A-series phones of 2022, this one also has an attractive look. The company has adopted something called “Ambient Edge” design which is highlighted by this rectangular camera bump that seamlessly blends into the rear panel.

No over-the-top camera bump or other elements. Pretty simple and subtle—just the way I like it.

But Samsung has gone an extra length to get rid of any and all “unnecessary” ports or openings on the Galaxy A33. For instance, there is no dedicated grille for the secondary speaker—and neither will you find the beloved 3.5mm audio jack here. In Samsung’s defense, you do get an official IP67 rating which was absent on its predecessor.

Another interesting thing about Samsung’s 2022 lineup of Galaxy phones—A33 included—is that it has committed to using recycled Post-Consumer Material (PCM) wherever possible. What this means is that the buttons and the SIM tray that you see here originated from discarded water bottles, CD cases, grocery bags, and such.

Besides this, the A33’s rest of the body is also made up of plastic. But Samsung has topped off the rear panel with a matte finish that feels anything but cheap. Its frames are not as shiny as that on the A53 but that also makes the A33 less slippery. So, I have no complaints there!

I wish I could say the same thing about the front of the phone though. Samsung should have opted for a modern-looking punch hole cutout rather than this outdated teardrop notch here.

Although it could go unnoticed over time, in the materialistic world that we live in, people might think you’re carrying a budget phone or a phone from say 2018! The situation with the bezels is not that exciting either!

Samsung has dared to stick with the same 90Hz Super AMOLED display setup as last year’s Galaxy A32 4G at a time when other brands are offering smoother 120Hz AMOLED screens at much cheaper prices. 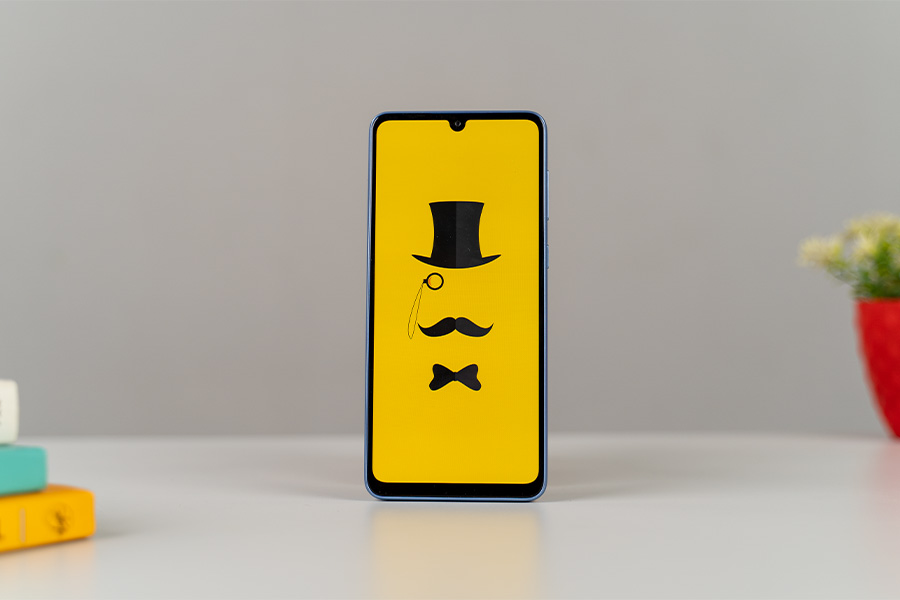 But when it comes to display’s core color science, I think the competition still has some catching up to do.

Here, I compared the A33’s display with the Realme 9 Pro+, and what I can tell you is that the Galaxy A33 has a slightly better quality screen in comparison. More specifically, we found it to have better details and slightly poppier colors.

Likewise, both phones have Widevine L1 and HDR certification for playing HD content off of streaming platforms like Netflix and Amazon Prime where we faced no weird issues throughout the review period.

You also get stereo speakers with Dolby Atmos on both these phones. Here, the Realme 9 Pro+ has a wider soundstage, even though I prefer the clarity and punch of the A33 5G. However, like I mentioned earlier, the A33 misses out on the good-old 3.5mm headphone jack that you get on the Realme 9 Pro+.

Keeping that aside, the A33 does offer an in-display fingerprint scanner and it performs quite similarly in terms of speed and accuracy as the one on the Realme 9 Pro+—if you turn off the animation in the settings, that is.

The Galaxy A33’s biggest asset is its camera. Although you do get a similar setup on the Realme 9 Pro+ as well, there is a vast difference in how these phones process an image.

As you can see, photos from Realme’s primary camera are contrast-heavy, while Galaxy A33 captures more real-to-life pictures. It even handles shadows better. Thus, photos from the A33 usually look more pleasing to my eyes.

The 8MP ultrawide shots from both the phones are, however, nothing to write home about. Still, if I have to choose one, it would be the Galaxy A33. That’s because, just like the primary shots, the ultrawide images from the 9 Pro+ are too dark for my liking.

Moving on, the Galaxy A33 clicks better portraits too. The thing with Realme is that it struggles with maintaining exposure.

As a result, more often than not, you will end up with an unnaturally bright subject or ones where the subject looks a little hazy in challenging light situations.

Overall, you will get better results with the A33 in most conditions.

As for selfies, the differences are more subtle. While I like the skin tone and details of the A33’s normal selfies, edge detection on portrait selfies is better on the Realme 9 Pro+ instead.

During low-light conditions, Realme does a much better job here and it certainly looks like Samsung should bring an update to improve the low-light photography on the A33 ASAP!

As you can see, whether it is regular nighttime shots or ones with Night Mode enabled, the 9 Pro+ takes better photos in the dark.

In terms of video, both phones can record at up to 4K 30 fps. If you put their videos side by side, you will notice that the ones from the Realme 9 Pro+ have better stability. However, it achieves such a result by cropping into the frame, which means that its videos are more zoomed in than that of Galaxy A33.

And if you have a gimbal with you, the A33 will yield better results as it produces better colors and dynamic range. As for 1080p videos, we didn’t find one phone to be superior to the other. They are neck-and-neck when it comes to details and even stability.

It’s the same with the ultrawide camera as well where both phones max out at 1080p 30fps. But the ones from 9 Pro+ do have a narrower field of view since it crops into the frame a bit.

Moving on, both phones record 1080p selfie videos by default. Then again, the 9 Pro+ has a slight edge here as its videos retain a relatively natural skin tone, which looks a bit more reddish on the A33 for some reason. Yet, it does let you bump the resolution up to 4K.

Ok, time to talk about the performance. Just like the Galaxy M33 and A53, the A33 is also powered by the new Exynos 1280 processor. It is Samsung’s latest in-house 5nm chipset, which brings significant performance improvement over the Helio G80, found on its predecessor—the Galaxy A32.

As powerful as this chip is, sadly, Samsung has not quite made the adequate optimizations required for a smooth smartphone experience. It has already been more than a month since we have been using this phone and we are yet to see any updates addressing this issue.

Take gaming for example. Even in popular games like PUBG: Mobile, you cannot push it beyond “High” frame rate even with lowering the graphics down to “Smooth”. So, you are stuck with a mediocre 30 fps gameplay here. On the contrary, the Realme 9 Pro+ can deliver a constant 40 fps even with the graphics set to HDR.

And as expected, the Galaxy A33 struggles to play Genshin Impact even at the lowest of settings. The frame rate fluctuation here is quite a lot and the phone also gets considerably warm. In comparison, you can get fairly stable 30 fps on the Realme 9 Pro+ in the same settings. 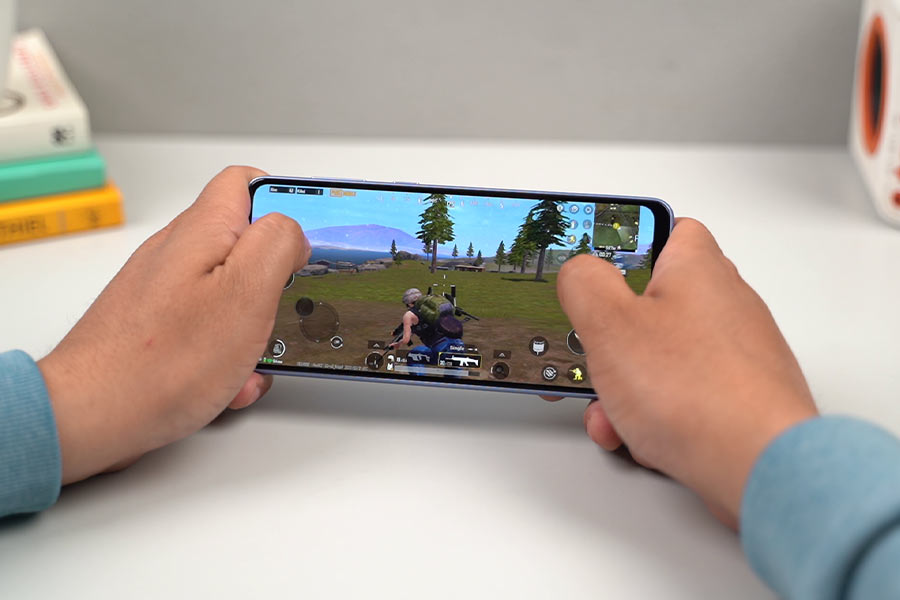 Adding insult to the injury is the fact that you can even notice its lack of optimization during regular day-to-day usage. It might not be that obvious at first, but when comparing it against the Realme 9 Pro+, you can see that the latter is snappier when it comes to opening apps or multitasking.

On top of this, normal tasks like replying to a text or unlocking the phone also feels better on the 9 Pro+ because of its haptic motor. On the other hand, the A33 has really weak and mushy vibration feedback.

Even the more premium Galaxy A53 performs almost the same in this department, although it’s gotten a bit better with the latest update which I’m yet to receive on the A33.

The only thing that’s better on the A33—as far as the user experience is concerned—is that it’s running on Samsung’s One UI 4.1, which is more modern-looking and easier to use. It also comes with very few bloatware apps.

But more importantly, Samsung has guaranteed 3 years of Android and 4 years of security updates here. With Realme, you might only get one or two major OS updates. So, that’s something really good on A33’s part. 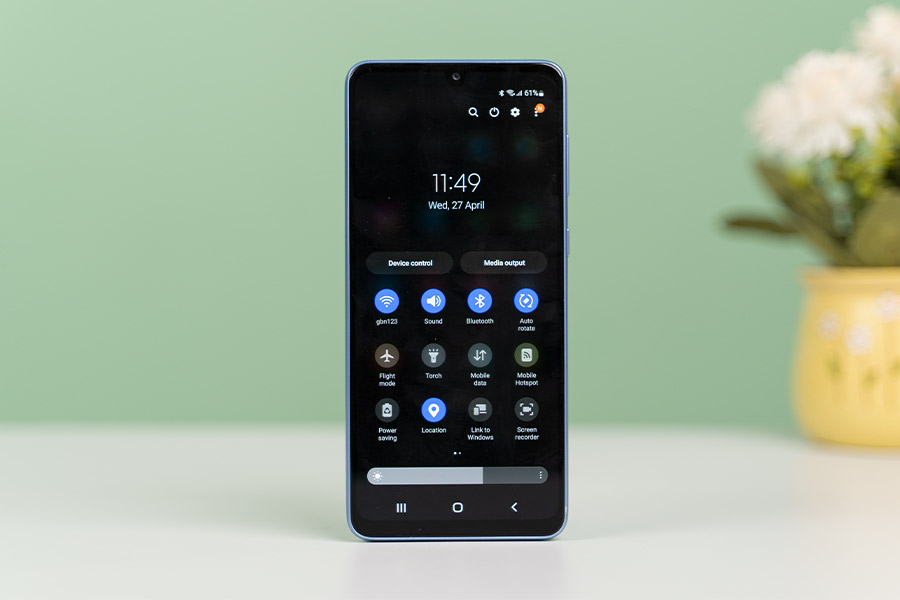 Still and all, Samsung must improve the performance of this Exynos chip because if the A33 is already underperforming right now, imagine how things will be in a year or two with the Android 13 update and all.

Another crucial thing we’ve found out is that the proximity sensor on this phone is a virtual one. Thus, it may not work as intended all the time.

As for the battery life, the Exynos 1280’s 5nm process node means it should theoretically make the A33 more power-efficient and therefore last longer, right? But in our experience, we found that it doesn’t make a whole lot of difference compared to phones with 8nm or 12nm chips.

On a full charge, we were getting a pretty standard battery life compared to the other phones with a 5000mAh battery—which means a full day of backup on moderate usage. And on a heavy usage pattern including gaming, shooting videos, and such, the screen-on time would drop even further.

Like most Samsung phones, the A33 supports 25W fast charging as well. And yeah, you gotta buy the charger separately here. With a compatible 25W charger, the phone’s battery goes from 1 to 100% in around an hour and a half.

Ok, time to conclude this review. So, should you buy the Galaxy A33 over the Realme 9 Pro+? Well, it depends on what you intend to do with your phone. If you want better cameras and a marginally better screen quality for watching videos, the Galaxy A33 is a better option. Plus, it also comes with an IP67 rating and 4 years of promised software updates.

However, it’s crucial to know that the phone’s performance is pretty bad for the price, at least for now, since the Exynos 1280 is not quite optimized yet. Therefore, it lags behind the Realme 9 Pro+ in both real-life usage as well as gaming. Plus, the 9 Pro+ also ships with a 65W fast charger included inside the box. So, if you ask me, the Realme 9 Pro+ brings in more value and a balanced set of specs in the midrange segment.

Anyway, if you are determined on getting a Samsung phone which is more balanced and has a better value for money, you’ll have to check out the new Galaxy M53. It brings a smoother 120Hz AMOLED screen, a 108MP primary camera, and a reliable Dimensity 900 chipset—all at a similar asking price as the Galaxy A33.

Also, check out the deals on last year’s Galaxy A52s from the retail stores nearby. Even though it was priced quite high at launch, Samsung has since slashed its price and you should get it at a very good deal right now. For a slightly higher price than the A33, the A52s brings similar IP-certified design and camera prowess, alongside significantly better performance. And comes with a charger inside the box as well.