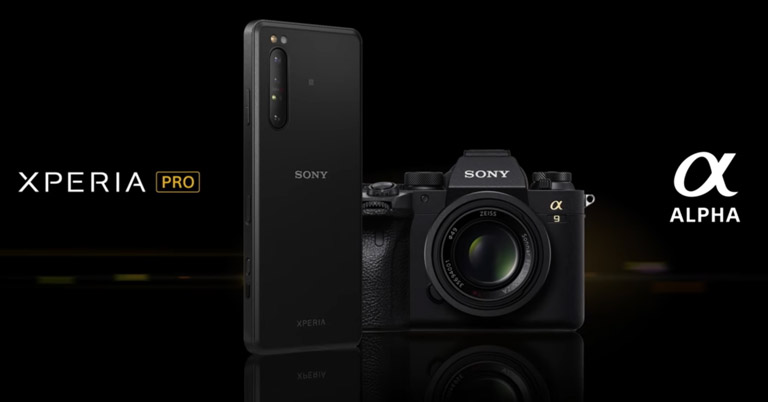 Sony has finally made the Xperia Pro available for purchase for the general public. For those unaware, Sony first announced the device alongside the Xperia 1 II almost a year ago. Xperia Pro is based on the Xperia 1 II but has added features that the phone is targeting professional photographers and videographers. Let’s take a look at the features, expected price, and availability of the Sony Xperia Pro in Nepal.

Since the Sony Xperia Pro is based on and shares most of the specs with the Xperia 1 II we are not going to discuss it in this post. This post will rather focus on how it differs from the Xperia 1 II, the company’s motive behind the phone, and what it offers to professional photographers. But before we begin, here is a quick recap of the specs that the Xperia Pro packs.

The first difference between the two phones can be found in the material of the phones. While the Xperia 1 II sports a glossy glass design on the back, it has been ditched for a polycarbonate back on the Pro. In a smartphone world, plastic is considered cheap however a robust plastic frame is what cameras and accessories need for durability. The plastic case of the Xperia 1 II makes it look and feel like the camera equipment that it is. Another selling point of the phone is its support for the mmWave 5G network. Though mmWave is faster than sub-6GHz, the latter is more stable and offers wider coverage. The 360-degree antenna system on the Xperia Pro has antennas at four sides of the technique. The antennas are based on beamforming technology. Also, the material used on the case of the phone has a low dielectric constant and thus offers less resistance to the 5G waves. To cope with the issues of variations on reception and speed of mmWave, the device has a network visualizer app preinstalled.

The next highlight of this device is that it has a dedicated Micro-HDMI port. Sony claims that the Xperia Pro is the world’s first device to have this feature. The port is placed right next to the USB Type-C. With this, you can now connect your Xperia Pro to your camera and use it as a viewfinder or an external monitor. You can then play with limited camera settings like brightness, grid lines, and zoom straight from the phone itself. And the presence of the Micro-HDMI port means that the Type-C port will always be vacant which can be used to supply juice to it – something you cannot do with traditional external monitors.

Can it replace external monitors? Sony wants you to think that Xperia Pro with its 4K HDR OLED panel and BT.2020 color gamut (though it doesn’t cover all of it) is a good replacement for the heavy and power-hungry external monitors but it also has its downsides. For instance, you cannot record footage separately from the camera. Also features like waveforms and focus peeking are not supported by the Xperia Pro, and these are some essential features for videographers.

You may also argue that smartphones prior to the Xperia Pro could also be used as an external monitor for cameras. There are apps that allow you to do so over Wi-Fi and Bluetooth connectivity. However, having a dedicated Micro-HDMI connector means you can now shoot videos from your camera and livestream them via third party applications over a mobile 5G connection. This is something that other normal phones are incapable of.

You can connect the phone to compatible Alpha cameras like the newly announced Alpha 1 and use the device’s 5G mmWave connection for high-speed PC Remote data transfer. This will allow users to handle the transfer of high-quality images in an efficient manner using an FTP server. So who is the Sony Xperia Pro for? Well, Sony Xperia Pro is a niche product tailored towards a very specific group. The regular Xperia 1 II will do just fine to most of the users but the added features of the Xperia Pro appeal to professional photographers and videographers that are into Sony cameras.

The phone does not come cheap. Even with the spike in flagship devices that we witnessed in the smartphone market last year, I think the $2,499 price tag stretches it too far. Even for the price, you are not getting the latest hardware. The phone was announced last year and packs in last year’s Snapdragon 865. The phone heavily relies on the mmWave 5G connectivity which is still not accessible.

If it’s ever launched here in Nepal, we can expect the price of the Sony Xperia Pro to be around NPR 4,05,000.