Vivo stayed low in the smartphone business for most of its time. Staying the midrange territory, the smartphone maker has quite satisfied its customers. And Vivo’s V-series and Y-series smartphones are here to tell all the tales. Now the Chinese tech titan seems to be pushing its limits. With under-display fingerprint sensor on the Vivo X21 UD, pop-up selfie camera on the Vivo Nex and the hole-less design on the Vivo APEX 2019, Vivo has garnered tons of applauds. And continuing with that innovative and winning spirits, Vivo has planned to drop a capable smartphone really soon. And Vivo iQOO is the phone, which seems to carry all the capable internals to place itself on the category of gaming phones.

Most of the Chinese smartphone companies have a sub-brand. Huawei has the Honor, Oppo has the Realme, and Xiaomi has the Pocophone and Redmi. Vivo has also planned to expand its business implementing the same strategy. And for that, the company recently announced its sub-brand IQOO. Vivo is yet to launch a smartphone under the sub-brand iQOO. But we shouldn’t have to wait too long for that. Vivo recently announced to launch an iQOO smartphone on March 1. And going by the specifications, the handset looks quite like a performer. 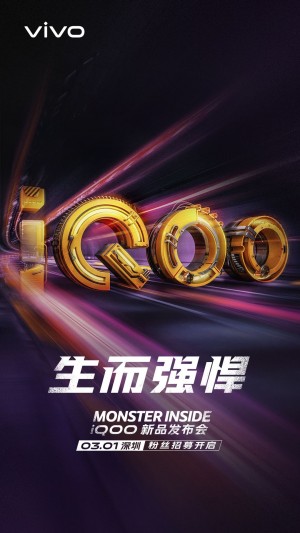 On the recent post on Weibo, Vivo teased the iQOO smartphone with the tagline “Monster Inside”. And this “Monster” will feature Snapdragon 855 chipset and a whopping 12GB of RAM. On the storage side, the phone will get 256GB of onboard memory. A chunk of specs spilled also mentioned that the phone would come with 4000mAh battery. With this setup, the handset undoubtedly cues to be of gaming genre. We have seen such configuration with a powerful processor, tons of RAM, and massive batteries on the phones like Xiaomi Black Shark, ASUS ROG phone, and Razer Phone 2. So we can expect the same with the Vivo iQOO smartphone.

Other than that, the phone may get the 44-watt fast charging, which probably would go by the name of FlashCharge. If it comes true, the FlashCharge would be the second fastest charging standard lagging just behind the Oppo’s Super VOOC charging technology.

On the optics front, the phone should be getting triple camera setup at the back. Although nothing has been mentioned about the front camera, it may feature the pop-up style camera which we recently saw on the Vivo V15 Pro. The Vivo iQOO is also said to come with an under-display fingerprint sensor. It cues that the display on the device will be of Super AMOLED type.