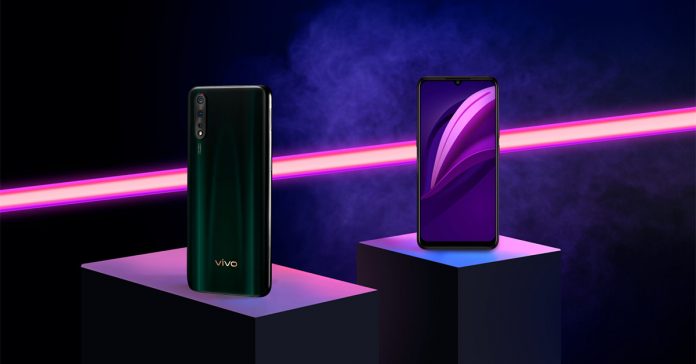 Vivo launched a sort of follow up to its Z5x model in the form of Vivo Z5, at an event in China. A lot was rumored about the phone prior to its launch, and now that it is finally here and it looks top-notch. At least on paper! Announced as the vanilla version of Vivio Z5x, the Z5 comes with a powerful processor and a much better camera.

Vivo Z5 will use the Snapdragon 712 SoC. It’s similar to the one available in the Z1 pro model. The chipset uses 8 Qualcomm Kryo 360 CPU cores and integrates the Adreno 616 GPU. The clock speed on 712 is 2.3 GHz. However, it is only a slight upgrade from the Snapdragon 710 available in Z5x which clocks at 2.2 GHz. Furthermore, the device also includes the Multi-Turbo feature for the enhanced mobile gaming experience. Interestingly, Vivo Z5 will be available in four variants. The base model has a 6 GB RAM with 64 GB internal storage. The other model come in 6 GB/128 GB, 6 GB/256 GB and 8 GB/128 GB variants. However, the 8 GB variant is yet to appear on sale.

The screen measures 6.38” diagonally and has an aspect ratio of 19.5:9. It supports full HD+ (1080×2340 pixels) and has a Super AMOLED display. However, it does not have a punch-hole screen as available in the Z5 Pro. This device contains a waterdrop notch up front to house the front camera.

Talking about the cameras, the rear has a triple camera setup. The primary lens is a 48 MP camera with f/1.79 lens. Along with that is the 8 MP (f/2.2) wide-angle lens and a 2 MP sensor. The front camera is a 32 MP (f/2.0) lens that supports pixel binning. Furthermore, the inclusion of Night View 2.0+ in order to improve low-light photo quality.

The device is supported by a huge 4500 mAh battery and supports 22.5 W fast charging. In addition to that, the device also supports OTG reverse charging. It will run on Android 9 Pie with FunTouch OS 9.1 on top. Furthermore, the inclusion of a 3.5 mm headphone jack is another thing that might please many users. As for security, the  AMOLED screen supports an in-display fingerprint and there’s the usual pin/password/pattern unlock.

Vivo Z5 seems like a complete package and that too just at CNY 1,598 (~$232) which roughly equals to Rs. 25,600. Now, it remains to be seen how the device actually compares to the other mid-range smartphones because its on-paper specs do seem enticing to me.