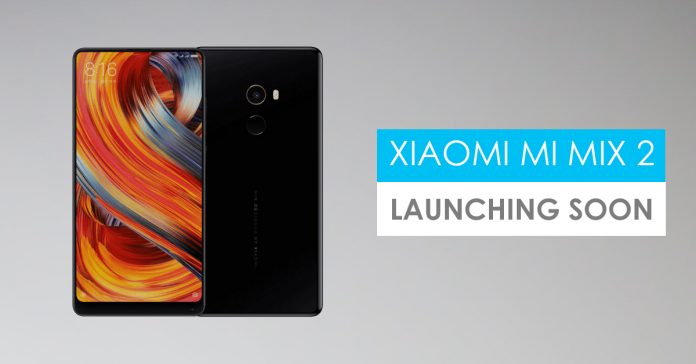 Xiaomi launched the successor of the Mi Mix, the Xiaomi Mi Mix 2, last September amid much fanfare. The device’s predecessor was one of the earlier smartphones to ditch traditional bezels. While the device is priced at Rs. 32,999 in India, we expect it to be available for approximately Rs. 72,000 for the baseline model. We can finally confirm that this device will launch here in a week.

Xiaomi Mi Mix 2 is a bezel-less device with an 18:9 aspect ratio. It has a 5.99-inch IPS LCD display with a resolution of 1080 x 2160 pixels. This display is cloaked by Corning Gorilla Glass 4 for that extra protection. The Xiaomi Mi Mix 2 basically has the specifications a proper flagship of 2017 comes with. So, it’s rocking an octa-core Qualcomm Snapdragon 835 processor under the hood. 6 or 8 GB of RAM pair up with Adreno 540 GPU to go alongside the processor. Only the special edition unibody ceramic design houses 8 GB of RAM on the inside. All other variants have 6 GB of RAM. The Xiaomi Mi Mix 2 offers consumers 64 GB, 128 GB and 256 GB storage variants. As far as the optics are concerned, the Xiaomi Mi Mix 2 has a single 12-megapixel rear-facing camera with f/2.0 aperture, dual tone LED flash and OIS. At a time when even a smartphone under Rs. 10,000 has dual real cameras, Xiaomi’s choice to opt for a single lens might turn off some buyers here in Nepal. The front-facing selfie shooter has a 5-megapixel lens with f/2.0 aperture.

The Xiaomi Mi Mix 2 runs on Android v7.1 Nougat with MIUI 9 on the top right out of the box. Xiaomi has already provided its users with the BETA version of Android v8.0 Oreo.

In terms of power, the Mi Mix 2 is supported by a 3,400 mAh Li-Ion battery. This battery can be charged up via a Type-C reversible connector which is supported by Quick Charge 3.0.