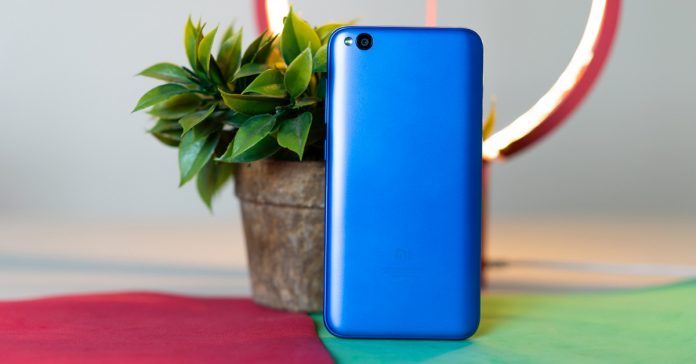 For an asking price of Rs. 9000, what would you expect from a phone? Not much, right? I had the same feeling when I switched to the Xiaomi Redmi Go as my daily driver. My expectations were already low. I was prepared for below-average user experience and lots of frustrations. But I’m glad to say I was not as correct. This phone isn’t half as bad as I’d thought. Maybe because all the phones in that price range I’ve tried till now have failed to impress me, but this is a different story. Right from the start, you know this phone cuts corners. The phone looks and feels cheap. It appears boring and weights like a feather, and yet I’ve seen worse at this price. The good thing here is its small form factor, ease of use, slight slipperiness but totally manageable. Plastic seems to be the material of choice, but I’m not complaining at all. It also feels pretty sturdy, unlike a few other budget Xiaomi phones.

The back is plain with a camera and an LED flash on top, alongside the Mi branding at the bottom center. The expandable storage and SIM tray are on the left, while the right side is occupied by the volume rocker and power button. The buttons are mushy and unsatisfying to click, but for the price, we can let it slide. The headphone jack is placed at the top, while at the bottom you’ll find the microUSB and a speaker grill.

You get what you pay for, and rest assured you are getting the most for your money.

You get a 5-inch display with a traditional 16:9 aspect ratio. It’s a small phone with huge bezels that doesn’t make for joyful user experience. Having said that, it’s wasn’t a huge deal-breaker. Because other than the form factor, the panel itself is bright, with good colors, and the sharpness is on point. Considering what its competition (there are very few) offers, this is one of (if not the best) display you can get in its category. The cameras were surprisingly good for the price. It managed to take some really great shots under good lighting conditions. While the image quality might appear a bit blur before taking the picture, end results come out better. Although they aren’t as sharp as I would like them to be. As for other lighting conditions (indoors), the photos come out grainy, lack details and are pretty much unusable. And it just gets worse in low light conditions.

The front camera shares the same story. Under good lighting, selfies come out decent, but indoor and low light conditions, it’s pretty much unusable. Then again, you can’t expect any more from this phone. Just look at the camera samples. That should give you a better idea of what it’s capable of. Either way, the camera’s performance should not make or break your smartphone buying decision, at least for the Redmi Go.

The cameras can be deemed “OK at best”.

A combo of middling hardware paired with great software makes for a fairly usable smartphone. It’s not bad, and that…was a huge surprise for me. Apps run well with their fair share of stutters and lags but nothing unlivable. Xiaomi is betting on Android Go to do the heavy lifting, and it doesn’t disappoint. The phone feels fast enough, browsing through the UI is smooth, and as far as gaming isn’t concerned, the performance is average. Xiaomi probably expected its users to make do with “Lite” or “GO” editions of apps. But I was able to run normal versions of the apps just fine. The only problem was, there isn’t enough space to fit them. As for games, PUBG failed to even run, but light games like Temple Run or Knife hit were playable. In fact, Free Fire at the lowest settings was running with a few stutters every now and then.

Performance is good, usable for social media and light games, thanks to its software optimization.

The Redmi Go, as the name suggests runs on Android Go based on Android 8.1.0. This phone does not, at all, feel like a Xiaomi phone and that’s something I liked a lot. The UI is as basic as it gets, with almost no bloatware on board, apart from a few (two) Mi apps. It’s simple to use, with no excessive features that no one uses anyway. The phone runs on Mint Launcher as default which could use a few bug fixes.

Overall, the phone’s biggest strength seems to be its software, keeping the phone running at a steady pace.

The 3000 mAh battery will last you around 4 hours (screen on time) under normal usage. I found myself draining the battery by the end of the day. My normal usage consisted of calls, texting, social media, lots of YouTube and a bit of Temple Run. A full charge takes a little over three hours via the default adapter in the box. It does not get any type of fast charging support, but I always put it on charge every night so that never bothered me. Four hours of screen on time, in general, is one day’s usage for most people, and this phone pushes out just that.

The phone gets three slots, two for SIMs and one for expandable storage. It supports 4G on both networks, a welcome feature, especially for an entry-level smartphone. Call quality seemed fine, but some of my friends complained about added noise as opposed to my primary phone (OPPO F7). This one also gets adaptive brightness, which is usually missing on most budget phones at its price.

The Xiaomi Redmi Go is, in the simplest terms, is “worth it”. You can look around all you want, but all these features packed into a phone that costs just Rs 9000 is hard to find. Performance is good with average battery life; cameras are OK and the display is fine. For the basic user, this is the phone to get. It’s basically better than any other phone in its category I’ve used, and could make a great gift for your grandparents, to say the least.