Apple has finally announced the 2nd Generation HomePod, two years after discontinuing the original HomePod. The new speakers join the HomePod Mini, which was released in 2020. Let’s take a look at the specifications, features, availability, and expected price of the Apple HomePod Mini (2nd Gen) in Nepal.

Design-wise, the new HomePod Mini looks similar to the original model. That is, it has a black and white mesh fabric exterior and an opaque touch panel on top. The latter glows with a colorful orb of light when you activate Siri. While a small white orb gently oscillates as the music plays, adding a visual element to the listening experience. 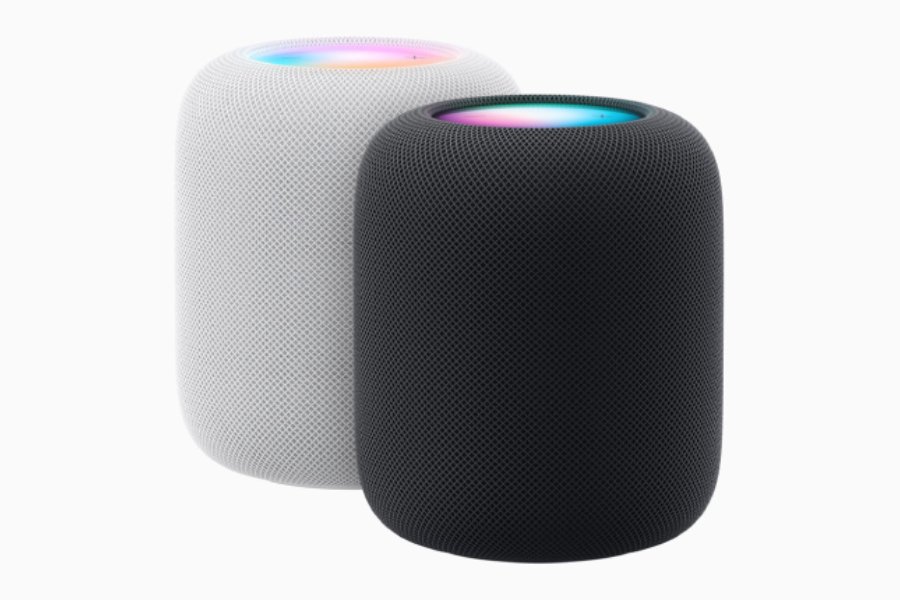 This display can also be used for controls. You can play or pause a song by simply tapping on it. Similarly, a double-tap will play the next song, and a triple-tap will return to the previous song. And for volume up and down, there’s a ‘+’ or ‘ -’ indicator within the display.

In terms of audio, the speaker has a single four-inch woofer as before. But the tweeter count sees a drop from seven tweeters to five. While the six microphones of the original model have also been replaced by four new far-field mics. Additionally, there’s an internal low-frequency calibration mic for automatic bass correction.

Like the original HomePod, the new model can detect its location in a room. Either it’s placed against a wall or left in an open space so that it adapts to the environment for better sound output in real-time. It’s baked with Apple S7 SoC that helps with computational audio and real-time tuning.

Additionally, you can pair two of them together for the stereo sound experience. Or can use them as speakers for the Apple TV 4K. There’s also support for spatial audio with Dolby Atmos, by the way.

While most of this is inherent in the original model, the new HomePod features built-in temperature and humidity sensors. This can be used to provide real-time information about your surroundings, and to trigger specific functions. Like it can turn on the AC or close the blinds when a preset target temperature is met.

Furthermore, like the HomePod mini, it can recognize the voices of up to six family members. The brand will also enable a feature via a software update where the device will listen for smoke or carbon monoxide alarms and notify you via an iPhone if it detects any.

The HomePod is priced at USD 299 and its shipping will begin on Feb 6. We expect the price of Apple HomePod (2nd Gen) to start at NPR 50,000, if and when it launches in Nepal.