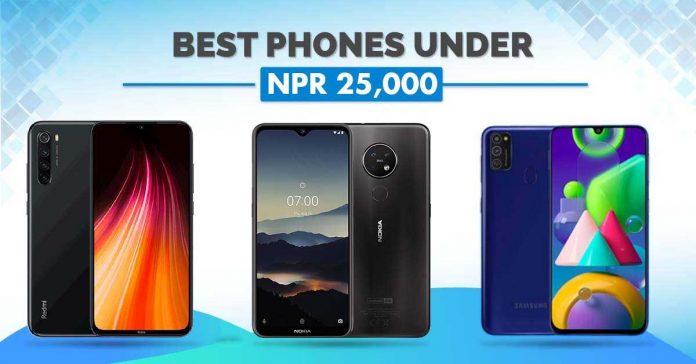 The mid-range smartphone market is probably the most competitive in many countries including Nepal. While most of us may not be economically able to purchase a flagship device, we’re fortunate enough since the mid-range phones have gotten so good these days. However, “Rs. 25000” market is a little bit of an oddball. Spend just a little more and you can choose from some of the best mid-rangers, save up a little and you go home with one of the best budget smartphones. Nevertheless, there are plenty of good options under this category. Let’s look at the best mobile phones under 25000 in Nepal.

At the price of under Rs. 25,000 in Nepal, you should at least expect a FullHD IPS Panel or even Super AMOLED ones on Samsung phones. Similarly, the latest Snapdragon 600 series should be your priority as they yield better performance. Furthermore, if you install a lot of games and click a lot of photos, 128GB storage should be a bare minimum. For battery, 4000mAh or more will usually yield excellent endurance. However, try to get a one with fast charging and a Type C port.

What’s the first thing that comes to mind about OPPO smartphones? Cameras. The OPPO A5 2020 has four of them in the back. Additionally, it also has a decent processor as well, thus securing the number 8 spot on our list.

Starting off, the A5 2020 features a quad-camera setup on the back with a 12MP main lens, an 8MP wide-angle camera, a 2MP macro lens, and a 2MP depth sensor. The only thing missing here that you’ll find in other high-end smartphones is a telephoto camera, but we’re not complaining, not one bit. For selfies, there’s an 8MP camera inside the small teardrop notch. 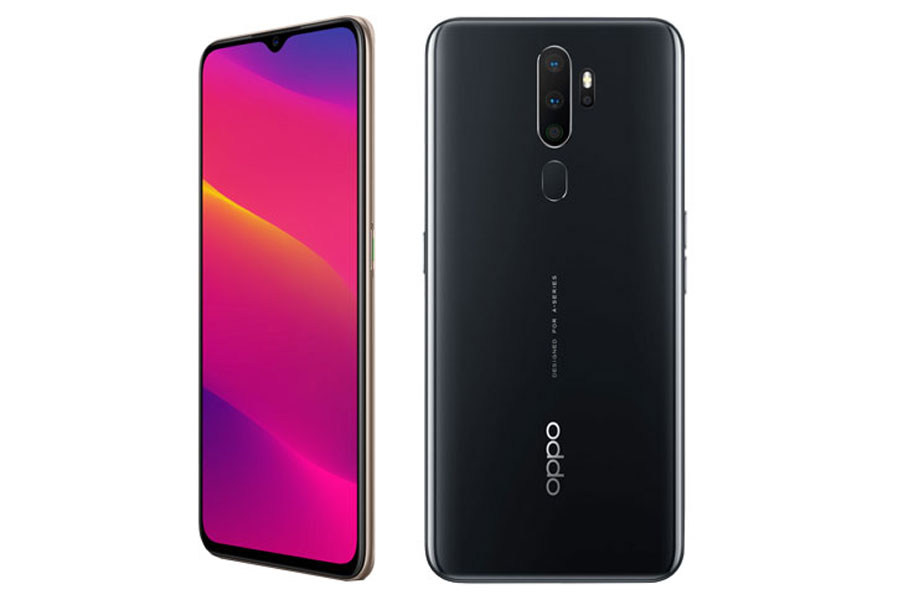 Moreover, the phone is pretty big at 6.5-inch, which is an HD+ LCD display. Talking about performance, it is equipped with octa-core Snapdragon 665 with either 3/4 GB of RAM and 64/128GB of storage. Its battery is something to be wowed by as well since the OPPO A5 2020 is powered by a big 5000 mAh cell.

Next on the list of best phones under 25000, we have the Realme 5. With an almost identical spec-sheet as the former A5 2020, the Realme 5 is another banger of a mid-range smartphone.

Let’s start with the phone’s design. It features what Realme likes to call “Crystal Design“, which reacts to light rays striking its surface giving it a tantalizing look. Given that, it is on the thicker side due to the big 5000 mAh battery, thus, kind of canceling out the visual aesthetics. 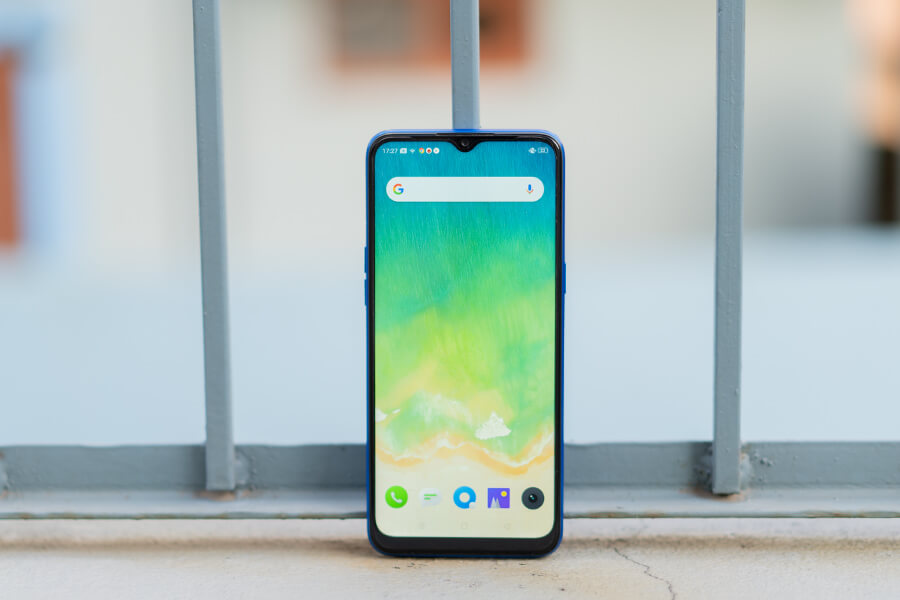 Moving on, it is powered by Snapdragon 665 and has a tall 6.5-inch HD+ LCD display with a “mini-drop” notch for the 13MP front camera. On the back, you’ll find the quad-camera setup with 12MP main lens, an 8MP wide-angle lens, a 2MP macro shooter, and a 2MP depth sensor. Running on OPPO’s Color OS 6 based on Android Pie, the Realme 5 has either 3 or 4GB RAM and up to 128GB of internal storage option.

In the land of overpriced smartphones, Nokia 7.2 surely was a fresh breath of el-air. Launched late but yet at a ridiculously low price than almost every international market, this device quickly won over the Nepalese audience.

I’ll definitely praise Nokia for the bold design choices. Nokia 7.2 is built from a “high-tech polymer composite” material with metal chassis finish and a glass back giving it a very premium look and feel. Coming to the display, it has a 6.3-inch Full-HD+ LCD panel with HDR support. Thus, this can be an excellent choice for those who watch a ton of videos on their smartphones. 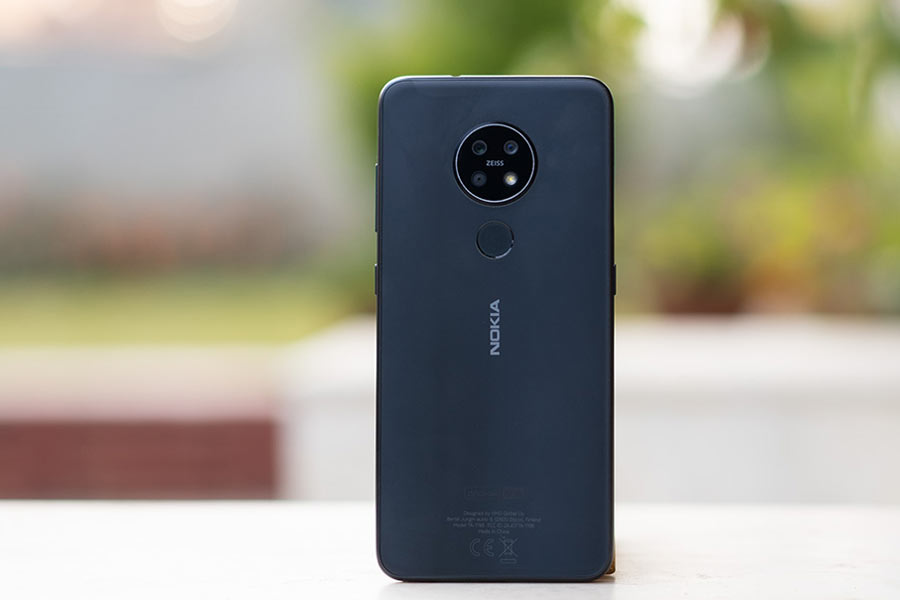 Moving to the cameras, the Nokia 7.2 has a triple rear camera on the back with a 48MP Qual-Pixel binning main lens, an 8MP ultrawide sensor, and a 5MP depth sensor. On the front, a 20MP selfie camera has been placed inside the teardrop notch. Performance-wise though, it features the most underpowered chipset compared to other devices on this list.

The Snapdragon 660 is a decent processor but definitely not powerful than the 665 or the 675. The battery here is small as well with its 3500 mAh cell that only supports 10W charging. It is a part of the “Android One” program so if you are a fan of stock Android, you’re definitely going to like the Nokia 7.2.

Like the former Nokia 7.2, the Mi ‘A’ series of smartphones from the company are also part of the “Android One“, thus offering a stock Android experience.

The Mi A3 is the fourth Android One phone from Xiaomi. With some major upgrades and one noticeable downgrade from the previous-gen Mi A2, the Mi A3 is another solid device. Offering a premium look and feel, the phone has a glass body both front and back, with an aluminum frame. Xiaomi has gone with a 6.01-inch HD+ Super AMOLED display. Why not FHD+? Cutting cost? Extending battery life? Who knows! Cameras also see an improvement in the Mi A3. Packing a triple camera array with a 48MP main lens, which gives out great-looking photos with decent color reproduction. There’s also an 8MP wide-angle lens and a 2MP depth sensor whose performance is alright. Coming to the front, you get a 32MP selfie camera inside a waterdrop notch.

Talking about performance, the Mi A3 is powered by the Snapdragon 665 chipset, which has been the most common one among the smartphones in this list. Suffice to say, the phone handles most tasks with ease. Similarly, you can play the popular game titles at not the highest, but good-enough graphics settings. Memory-wise, there’s either 4/6 GB of RAM and up to 128GB of internal storage. A 4030 mAh battery supporting 18W charging is another point in the bank for the Mi A3.

While there were statements about the Redmi Note 7 Pro not making its way to any other markets except India and China, it actually made its way to Nepal – even though it was late. And maybe it did cause some dissatisfaction among those who actually wanted the Redmi Note 7 Pro, but settled for the Redmi Note 7 instead. Anyways, both the phones are available in the Nepali market currently, and for the same price as well! And to me, the choice is obvious!

For starters, the Redmi Note 7 Pro packs the Snapdragon 675 – which is, an immensely better processor than SD 660. Also, even though the camera is a 48 MP on both, the Sony IMX586 sensor on the Note 7 Pro makes it better. In addition, the processing power of the SD 675 makes for better images, without contest! So, for raw power alone, the Redmi Note 7 Pro is the one to go for in this price range. 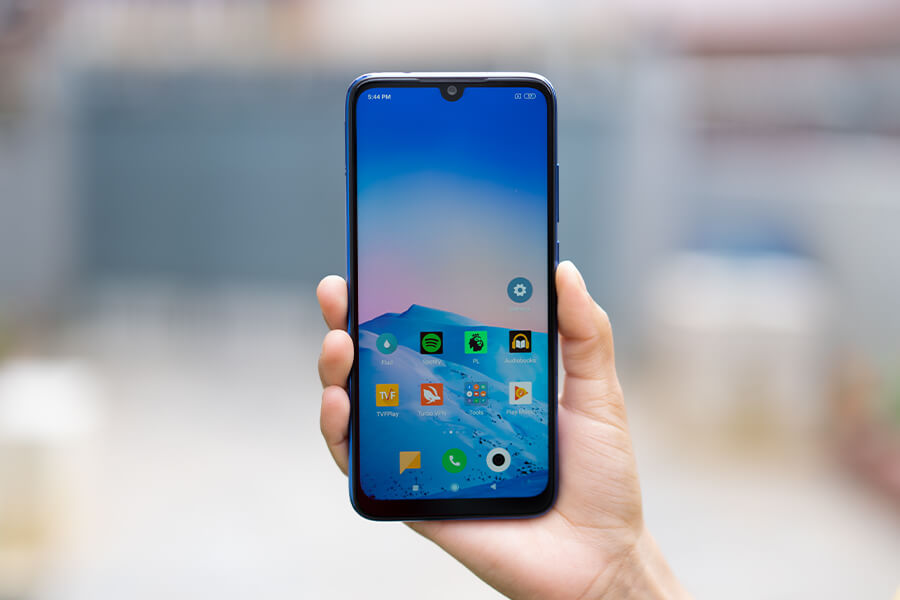 Its design is something to admire as well. The Note 7 Pro comes in a 6.3-inch Full-HD+ LCD display and a glass back with Corning Gorilla Glass 5 protection. The screen has rounded corners and a ‘U’ shaped notch for the 13MP camera. A 4000 mAh battery complements the phone’s performance that supports 18W charging.

The third on our list of best mobile phones under Rs. 25,000 in Nepal is the Samsung Galaxy M30s. Featuring an enormous 6000mAh battery, the Galaxy M30s is easily a 2-day battery life phone. It also comes with a USB type C port and a 15W fast charging. 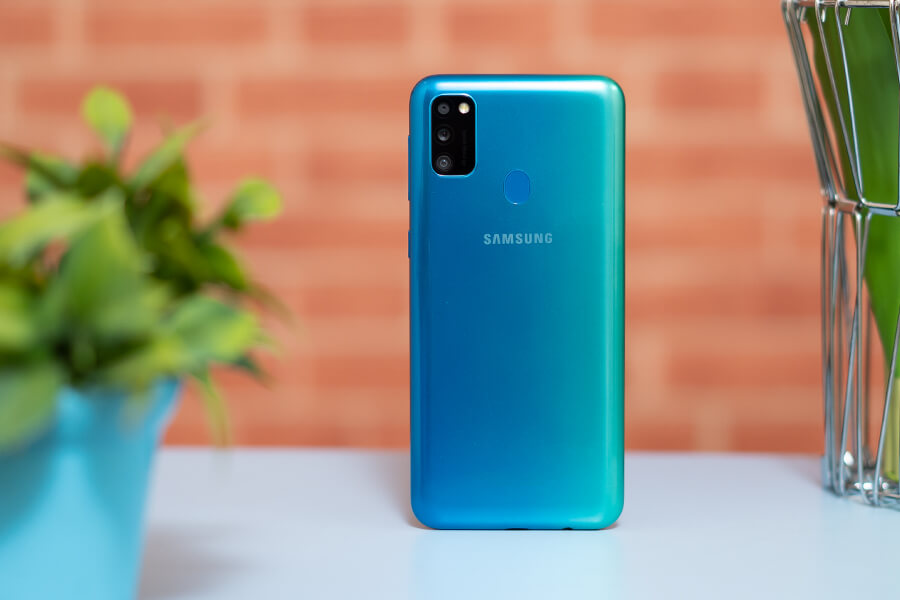 Along with a big battery, the Galaxy M30s also has a Super AMOLED FullHD+ display, which none of the phones in this list comes equipped with. Similarly, the triple camera produces over saturated vibrant images you might like. The Galaxy M30s, however, comes with a plastic back and is not a handsome lad. It runs on Android 9 Pie, but Android 10 based on One UI 2.0 should roll out soon.

The recently launched Samsung Galaxy M21 takes the second spot in our list of best phones under Rs 25000 in Nepal. And it’s practically the same phone as the M30s above it. Galaxy M21 has the same form factor, same design, same display, same processor, and the same rear camera arrangement. The only notable difference lies in the selfie shooter, which has been upgraded to a 20MP lens here – compared to the 16MP one on the M30s. 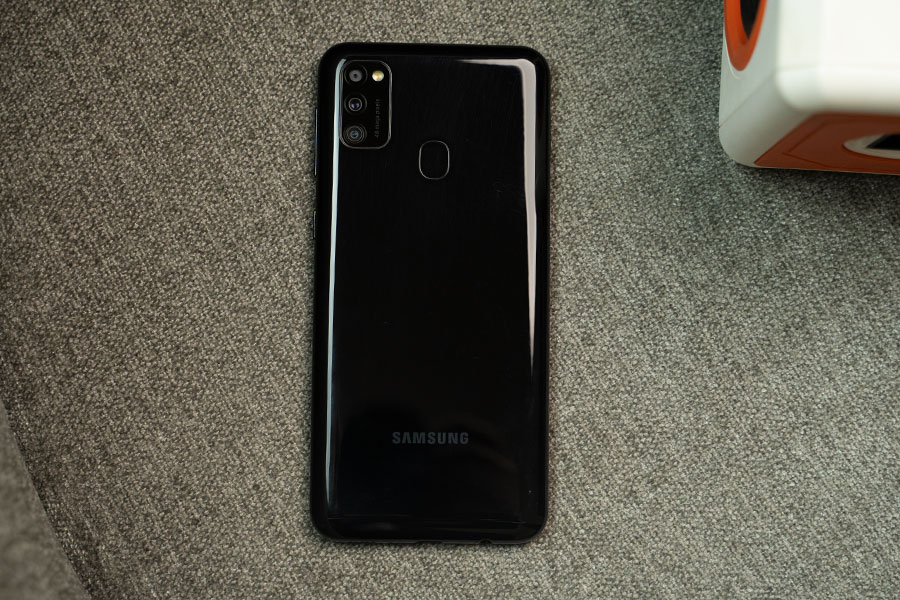 Topping our list is Xiaomi’s Redmi Note 8 which was launched a while back in Nepal. Packing a 48MP quad-camera setup and a gorgeous design, the Redmi Note 8 may very well be the phone to beat in this price range in Nepal.

It has a 48MP Sony IMX586 sensor, an 8MP ultrawide lens, a 2MP macro lens, and a 2MP depth sensor. On the front, there’s a 13MP selfie camera inside the regular waterdrop notch. So, people who are looking for a phone with good photography prowess on a budget should find the Redmi Note 8 appealing. 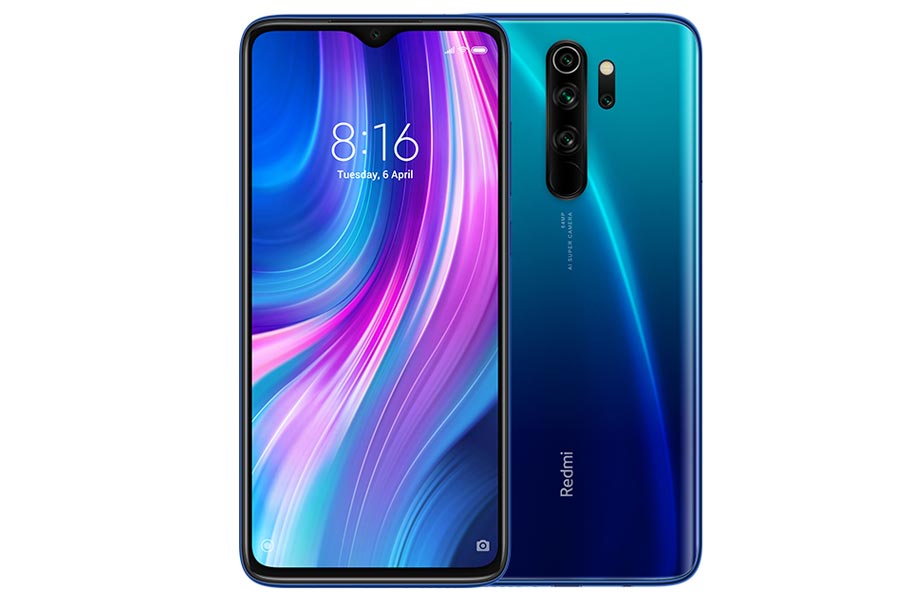 Talking about performance, it is powered by Snapdragon 665, which is a good chipset but is slightly under-powerful than the 675 on the former Note 7 Pro. But what you’re getting on the Note 8 is a better camera setup, more storage, at a lower price. Thus, the Redmi Note 8 is our number one pick for the best smartphones under 25000 in Nepal.

Samsung expands the availability of its UV Sterilizer in Europe &...