Samsung has just announced its latest flagship notebook lineup. The new Galaxy Book2 Pro lineup consists of four laptops — two of which feature 360-degree hinges. In this article, we will be discussing the specs, features, expected price, and availability of the Samsung Galaxy Book2 Series (Book2 Pro, Pro 360) in Nepal.

The Galaxy Book2 Pro comes in two screen sizes — 13.3” and 15.6”. The former comes in a more portable form factor. Otherwise, you get the same AMOLED panel with an FHD resolution of 1920 and 1080 pixels on both.

Samsung has opted for a more advanced Super AMOLED touch panel on the Galaxy Book 2 Pro 360 models. It’s still an FHD panel but boasts 120% coverage of DCI-P3 and up to 500 nits of brightness in HDR playback. Not to forget the 360-hinge that gives these laptops their name. Samsung even ships a compatible S Pen in the box.

Talking about the performance, Samsung Galaxy Book2Pro series is powered by the latest 12th Gen Intel processors. In terms of graphics, you get Intel’s integrated Iris Xe GPU on all. However, with the 15.6” Book 2 Pro, you can even opt for new Intel Arc discrete GPUs. In addition, the whole lineup has bagged EVO certification from Intel.

The base variants of the Galaxy Book2Pro and Book2 Pro 360 feature 8GB of LPDDR5 RAM and 256GB of SSD storage. Samsung offers these notebooks with up to 32GB RAM and 1TB SSD.

Galaxy Book2 Pro series comes with island-type backlit keyboards. Samsung has integrated a fingerprint scanner on the power key for biometrics. The 15.6” models even have a dedicated number pad.

Likewise, we get AKG-tuned stereo speakers with Dolby Atmos on all models. However, 13.3” models max out at 4W, while their bigger siblings boast a maximum output of 5W. Moving on, you get 1080p webcams with a dual-mic array on all Galaxy Book2 Pro notebooks. 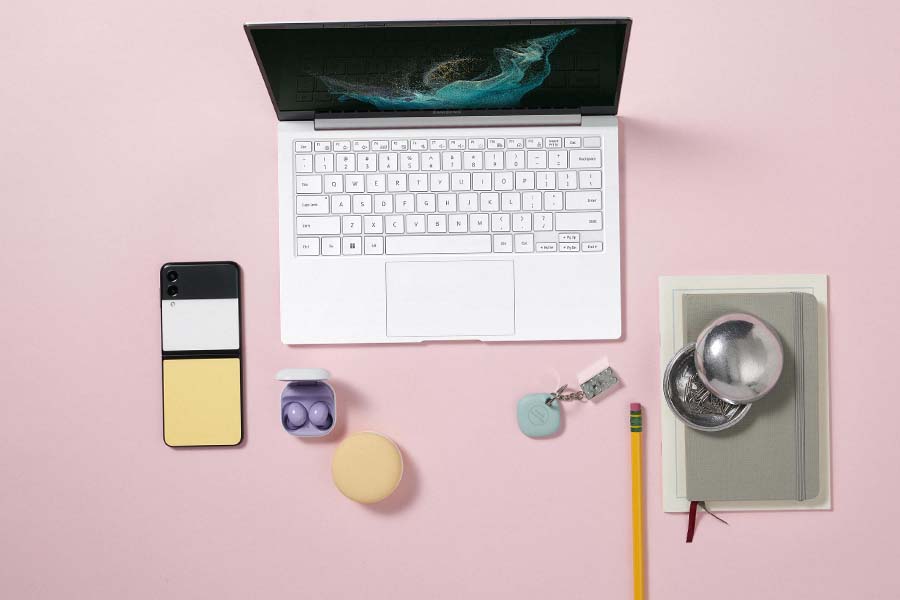 There is also a feature called Galaxy Book Smart Switch, with which you can transfer data from your old data to the Galaxy Book2 Pro lineup irrespective of the brand. Other notable features include Quick Share (now updated with a link sharing option), SmartThings hub, Samsung Multi Control, and more.

All the 13.3” models come are fueled by 63Wh batteries, while the 15.6” siblings sport bigger 68Whr cells. Samsung includes a 65W Type-C charger with all the Galaxy Book2 Pro laptops.

The port selection varies according to the variant. All of the Galaxy Book2 Pro 360 laptops feature one Thunderbolt, 2 UBS Type-C, a combined audio jack, and a microSD card slot. The 13.3” Galaxy Book2 Pro features on replaces one of the Type-C with a USB 3.2 and adds an HDMI port. Finally, the 15.6” Galaxy Book2Pro also adds an optional SIM slot.