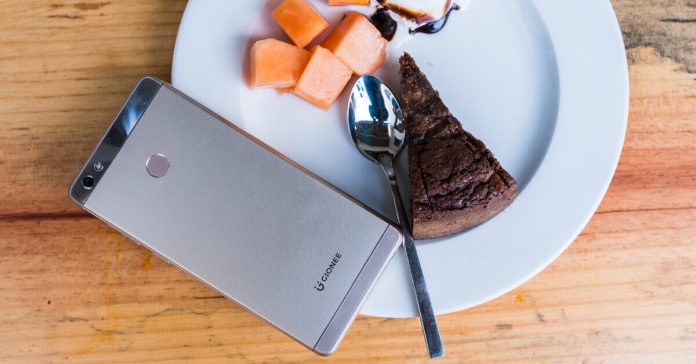 The Gionee M7 Power has launched at a time when the mid-range price segment is getting more competitive than ever. After months of waiting, Gionee Nepal launched the device last month. The M7 Power sports an HD display for a price of Rs. 29,999, which could come as a bummer for the buyers. However, with a huge 5,000 mAh battery and a FullView display, the M7 Power certainly stands out from the rest of the crowd. But is battery and design everything the smartphone has to offer? Let’s find out in this review. The Gionee M7 Power has a huge 5,000 mAh battery which is certainly the USP of the device. The battery coupled with the HD display of the smartphone runs easily for two days straight!

These days, OEMs have started to focus on making their smartphones slimmer than ever. That step has taken a hit on phones’ battery life. But Gionee has managed to do both – pack a massive 5,000 mAh battery in a comparatively thin body. I did compare the Gionee M7 Power’s dimension with other smartphones that house a big battery, and the M7 Power was certainly the star!

The major advantage of having a battery that big is that you can charge other smartphones if you ever happen to run out of power.

Being a battery-focused smartphone, the Gionee M7 Power is meant for a particular user. It is a device which will fulfill of, say, a businessperson who is in need of a secondary smartphone which he won’t have to worry about charging time and again. It is meant for someone who isn’t that into multimedia and gaming but has to make a lot of calls and send lots of texts as the day passes. One of the interesting features of the Gionee M7 Power is its design. The device’s huge 6-inch form factor is cloaked by a slightly textured aluminum at the back. The M7 Power certainly feels premium on hands and the Chinese manufacturer has done a commendable job by including a huge 5,000 mAh battery in such a sleek body. I was really surprised that Gionee had managed to include a big battery in a comparatively thinner design.

The feature of the Gionee M7 Power’s design is certainly the huge slab of a display up front. The display is sandwiched between minimalistic bezels that make up for an 18:9 aspect ratio in terms of display. There is a secondary camera up top with the primary lens housed at the rear side. The power button and the volume rockers are placed in such a manner that even people with smaller hands can reach them comfortably. However, since the device is a metallic smartphone, it slips – a lot. So, I advise you to cover the back with a case! The 5,000 mAh battery powers up a 6-inch FullView display of the smartphone. Priced at Rs. 29,999, Gionee could have easily gone with a display with Full HD resolution. However, that’s not the case here as the Gionee M7 Power sports a 720p display. Now I know that the device has focused on providing a display with minimalistic bezels to its users but at a time when even some of the cheaper smartphones have started featuring a 1080p display panel, it is really strange as to why the M7 Power has a HD display.

The M7 Power’s display, with its HD resolution, is certainly bright though. However, if you happen to watch videos on your smartphone, you will notice the difference in quality against, say, the Huawei Nova 2i, the Samsung Galaxy J7 Pro or the Xiaomi Mi A1, which are the rivals of the M7 Power in the current Nepali smartphone market.

The Gionee M7 Power packs an octa-core Snapdragon 435 processor alongside 4 GB of RAM and Adreno 505 GPU. Now I am not saying that the Snapdragon 435 chipset is below par by any means, but for the price tag, Gionee should have at least opted for a Snapdragon 625 chipset or MediaTek Helio P23, which definitely provides a better performance.

Under real-life usage, the Gionee M7 Power does a great job handling all the multitasking needs with its 4 GB RAM. I only faced stutters when I was trying to do too many tasks at once, and that happened very rarely! There were only a couple app crashes, though. Even long sessions of gaming on the device felt really enjoyable with the 6-inch display of the device. The Gionee M7 Power does get warm at the back but that’s nothing to worry about.

On the benchmark side of things, the Gionee M7 Power with its Snapdragon 435 SoC, scored higher than some of its competitors such as the Vivo V7 and the Samsung Galaxy J7 Pro on Antutu. However, the Huawei Nova 2i edged out the device by a slight margin. The Xiaomi Mi A1 and the Oppo F5 look like a better option if benchmarks are considered! Now talking about the software side of things, the Gionee M7 Power runs on Android 7.1 Nougat with Amigo OS 5.0 skin on top. Amigo OS looks like a copy of Apple’s iOS but there are a few features here and there. However, for someone who is into a stock-Android experience, I didn’t enjoy the UI of the device. But unlike the Oppo F5, which focused on blatantly copying iOS, Gionee has included few extra features here and there to make up for a rather different UI. I really liked the shortcuts (eg. Double tap to wake and sleep) the M7 Power offered and don’t really think it’s all gimmicky. On the optics department, the Gionee M7 Power houses a 13-megapixel rear-facing and an 8-megapixel front-facing camera. Let’s start with the front-facing camera. The selfie camera on the smartphone takes some pretty decent images, but with beautification enabled. The “normal” mode itself beautifies the selfies a little bit, so, personally, I didn’t really dig it. And maybe the secondary camera could have saturated the pictures a little bit. If you look closely, the selfies from the M7 Power come out with a slightly warmer touch, whose preference depends completely upon a user. Oh, and there is a software-powered portrait mode in the camera which blurs the surrounding of your picture! The primary camera measuring 13-megapixel is nothing extraordinary. The pictures it takes have good details and a bit a decent color reproduction but failed to maintain a good contrast level. And even this camera captures pictures with a warmer tone which isn’t my cup of tea. And the colors didn’t really pop due to the lack of ample saturation. But then again the camera isn’t really what Gionee is focusing in on this smartphone. So, if you are into taking lots of pictures via your smartphone throughout the day, maybe you should look somewhere else. The Gionee M7 Power features 64 GB of onboard memory with an option to expand up to 256 GB. This is an ample storage for anyone who is into saving a lot of videos, movies or audios on their smartphone. On the rear side of the device rests a fingerprint scanner which can unlock the device in an instant. I had no issues with the fingerprint scanner whatsoever.

When we gave the Gionee M7 Power to an audiophile for the review here is what he said about the speaker quality, “However, one thing that really bugged me is the how the bottom firing speaker sounds. Gionee has followed this trend of smartphone manufacturers not focusing on the sound quality of their smartphones’ speakers. Yes, it does get little loud but as an audiophile, I really wasn’t impressed with it.”

Like I said before, the Gionee M7 Power with its price tag goes up against the smartphones of the mid-range price segment which is getting more competitive than ever. If performance, camera, and display are considered, there are already lots of devices that can provide the best of experiences. And for the price of Rs. 29,999, the smartphone isn’t that interesting at all and seems slightly overpriced. So, is the Gionee M7 Power a miss? No, not really. Gionee launched this battery-focused smartphone targeting a particular group of people which mainly consists of businesspersons who are in search of a secondary smartphone.

However, if you don’t fall into that category and want a smartphone that fulfills your performance, multimedia and photography needs, you should look somewhere else. For camera and display purpose, the Samsung Galaxy J7 Pro and the Huawei Nova 2i seem like a better option, while if you are after performance, you should get the Xiaomi Mi A1, or wait for a month and buy the Xiaomi Redmi 5 Pro.