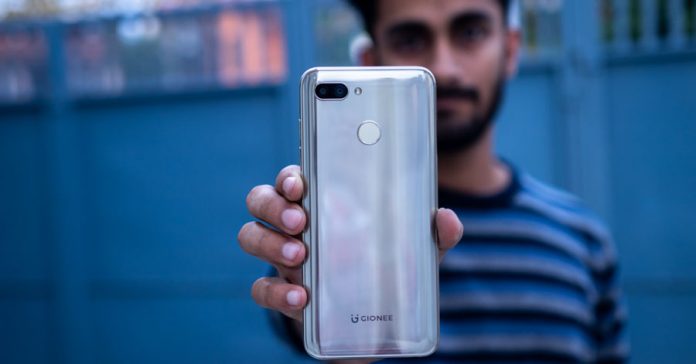 For a couple of years now, smartphone companies have shifted their focus to the mid-range segment where we are getting to see new launches of some promising smartphones every other day. Each of these smartphones claims to excel at something they house. And that is exactly what the Gionee S11 Lite is doing. Launched a while back for the price of Rs. 26,000, the device claims to pack in a lot of features, with its camera being the USP. So, is this smartphone capable of leaving a mark in the nearly-saturated mid-range market? Let’s find out in this review. 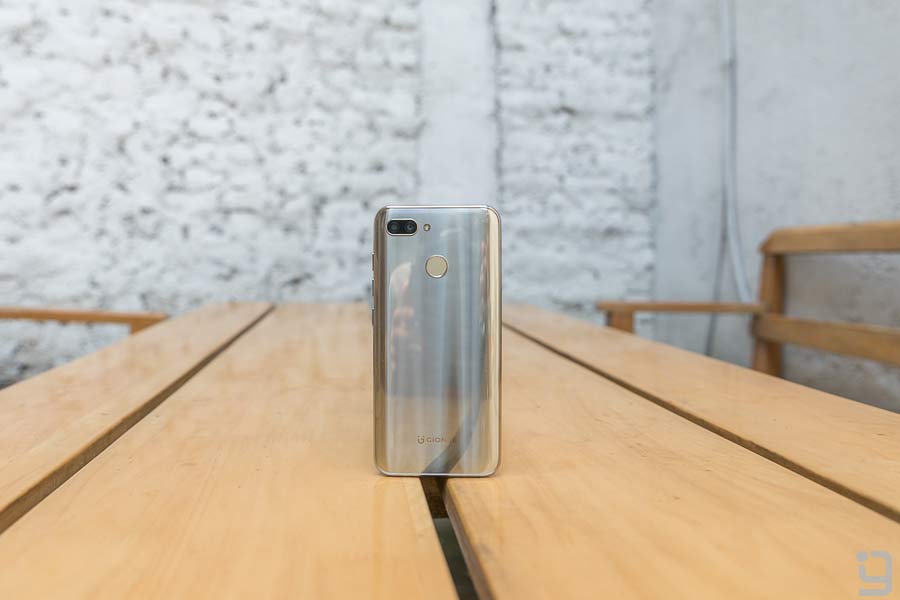 Let’s start with the design and build. One of the highlights of Gionee S11 Lite is its stunning design. I mean just look at that shiny back. Gionee sure has nailed the looks of the device. However, the back is prone to attract fingerprints, and that too a lot. So, a case is a must. And while using and the material on the back flexes sometimes. This is solely due to the plastic material this smartphone is covered in. For what it’s worth, I think it should have been cloaked in a metallic back. The volume rockers and the power button are easily felt and it is tactile, but here too, the plastic material tends to feel cheaper sometimes. And Gionee, if you really had to opt for plastic, you could have at least included a sturdy one! To sum up, even though this smartphone looks attractive, it surely doesn’t feel like one. Just take a look at the competitions, almost all the smartphones of its price range have a premium feel with the metallic back they house. Up top, there is a 5.7-inch display that comes in with an 18:9 aspect ratio. This is a plus for someone looking for a trendy smartphone, although the decreased bezels are still not that minimal. This display has HD resolution, and you can experience the lack of sharpness and saturation, something that you can find in a full HD panel. Take the competition, for example, smartphones like the Xiaomi Mi A1 and Huawei Y9 2018 are cheaper than the S11 Lite but feature a crispier 1080p panel. We are currently at a time when the mid-range smartphones are nailing almost all the aspects of a mobile phone, and then Gionee comes with a device that is worth Rs. 26,000, and sports an HD panel. That sure is disappointing. However, the display is bright enough, and it does well in the bright light setting. Plus, I really like the inclusion of the ‘Smart eye protection’ mode which helps to filter out blue light to protect from visual fatigue. You can adjust the setting of the smart eye mode as per your desire.b 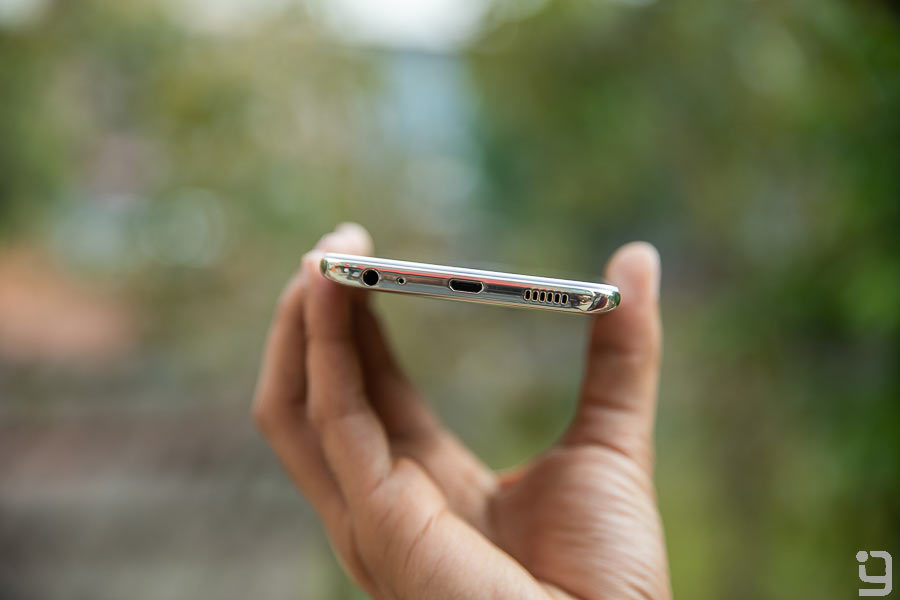 The Gionee S11 lite comes with 32 GB of onboard memory which can be expanded up to 256 GB via a microSD card slot. Now, although there’s an option to expand the memory, I still think for the price of Rs. 25,999, smartphone companies must be including 64 GB of memory now, this has become a necessity now!

I had previously complained about the speaker quality of the M7 Power in my review, and I kind of faced the same issue with the S11 Lite. The bottom firing speaker gets muffled sometimes and it doesn’t get that loud as well.

On the back sits a fingerprint scanner that is easily reachable and handy. The Gionee S11 Lite has one of the fastest fingerprint scanners I have seen on a smartphone. Yes, it is that fast. The unlocking is quick, and you can count on it at all times. And this scanner also helps to unlock applications, and capture pictures with ease. 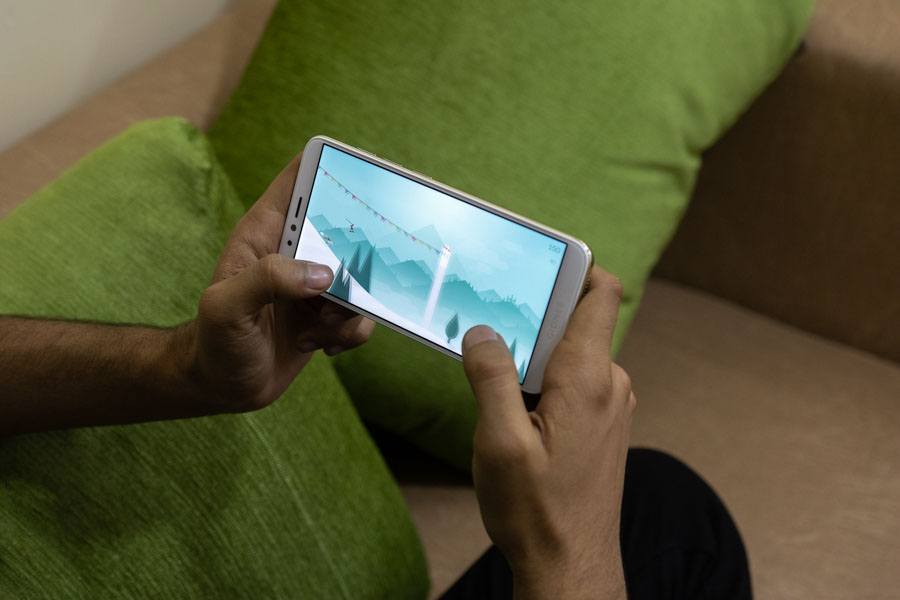 Moving on to the performance, it is quite unimpressive that Gionee has opted for the chipset which we usually see in smartphones worth 14000 – 15000. But the performance has been satisfactory, at least for me. It handles my day-to-day usage which includes a bit of gaming, internet browsing and running a lot of applications. Yes, there are stutters sometimes, but it handles the necessities of an average user. This may be partly due to the device not having to power a high-resolution display. Oh, and It tends to warm up only a little bit after a long session of gaming and heavy usage.

As for the software, this device runs on Android Nougat and an iOS-like Amigo UI.  It comes equipped with a lot of bloatware which for me Is quite unnecessary, although some of the extra features like the battery manager and the app lock are quite useful. But if you are someone who wants the Operating system of their smartphones updated, you might want to look somewhere else as Gionee isn’t known that much for updating its phones’ software. Gionee has boasted the camera setup of the S11 lite which includes a 16 MP selfie camera. It also offers Group selfie and faces beauty. The pictures are clear and vibrant but I did notice these grains on the selfies, as you can see from the images. The selfies sure look great but there is that unusual effect on the images. The rear houses a dual camera of 13MP and 2 MP. The “normal” shots from the camera are decent, I have to say. But they lack saturation and that “pop” which make the pictures look great. In low light, there is a loss of detail, and that loss is kind of huge. The camera also attracts lots of noise. So, using this device for the night time is a no-go for me.

This rear camera offers Bokeh mode as well. The bokeh mode was sure fun to use as the intensity of the blur can also be adjusted. However, the device struggles to identify the subject and blur the background effectively.

In the first shot, the flower petals weren’t identified whereas in the second one, the cameras did suffer a lot although it produced images such as the last one where the device only struggled to blur out the parts of the girl’s hair. The Gionee S11 Lite comes with a dual hybrid SIM slot that houses a nano SIM and provides another option to add either a microSD or a nano SIM. The call quality from the phone was good and the people on the other side never really complained about the sound. However, with most Nepali people using dual SIM cards, the choice they have to make between a SIM card and an SD card is kind of tough, to say the least. So, if any smartphone company is reading this review, people do not include a hybrid SIM slot. The Gionee S11 Lite houses a 3,030 mAh battery. It doesn’t support any form of fast charging which is a bummer as it took me over 2 and a half hours to fully charge the battery. Under heavy usage, it gave me a screen-on-time of around 5 hours. And talking about its stand-by time, well, it’s kind of weird. Once, I slept with around 25% of battery left on board, but when I woke up the next day, the phone was dead. However, other times, it can certainly last for a longer time.

The Gionee S11 Lite is an interesting smartphone looking to leave a mark in the Nepali market. The device has a good camera and an intriguing design, that can attract anyone on the first glance. However, Gionee has cut corners in a few areas, and they are the areas where competitors are offering a lot more for the price! The competition now is sure tough and Gionee, with the S11 Lite, has struggled to live up to that mark.

If the Gionee S11 Lite isn’t really your cup of tea, you might be interested in some its competitors like the Xiaomi Mi A1, Coolpad Cool Play 6, Galaxy J7 Pro, or Huawei Nova 2i.