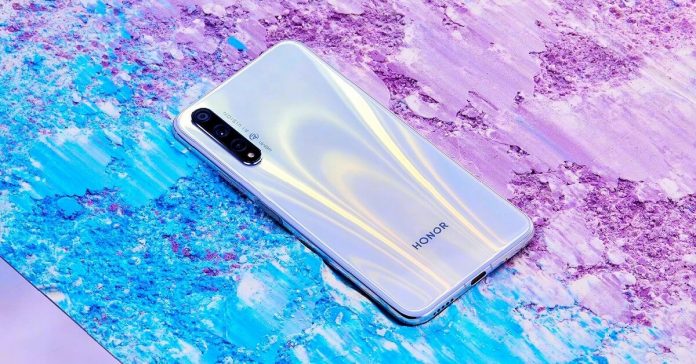 Honor garnered quite a lot of success with its Honor 20 series smartphones. The company managed to sell 1 million units of Honor 20 alone just in a matter of two weeks. Maybe to repeat that success, the company has added yet another device in its Honor 20 series lineup in the form of Honor 20s. The newly launched Honor 20s is basically the toned-down version of the Honor 20. But apart from the Honor 20s, Honor also launched a budget-oriented Honor Play 3.

The Honor 20s highly resembles with the vanilla Honor 20 in terms of looks. The phone packs a 6.26-inch IPS display with a tiny punch hole cutout on the top-left corner. When it comes to resolution, Honor 20s boasts a Full-HD+ resolution in the elongated 19.5:9 aspect ratio.

The camera is growing as a strong on all the recent Huawei and Honor phones. The flagship Honor 20 Pro managed to get a noteworthy 111 points sharing the position with the OnePlus 7 Pro. Honor 20s, being a member of the same Honor 20 series family, we can expect a notable camera prowess. And even its setup looks quite promising. The phone packs a triple camera setup, which comprises of a 48MP main shooter, an 8MP ultra-wide-angle lens, and a 2MP macro lens. Similarly, on the front, you get a 32MP selfie snapper. The biggest thing that differentiates the vanilla Honor 20 and the 20s is the processor. Honor 20 had the flagship-grade Kirin 980 processor. But on the 20s, Honor swapped the Kirin 980 with Kirin 810. So you can expect some drop in performance during the side-by-side testing. On to the memory front, the phone comes in 6/128GB and 8/128GB variants with no support for storage expansion.

On to the security front, there is a fingerprint scanner and the Face Unlock feature. But unlike the competitors, who are into in-display fingerprint scanner bandwagon, Honor has mounted the scanner on the side. Also, the phone lacks a 3.5mm headphone, which can still be a bummer for the audiophiles.

As for the battery, the phone powers with a 3750mAh battery, which supports 20-watt fast charging.

When Honor launched the Honor Play, it was considered a flagship killer at that time. The phone had flagship processor and some other top-of-the-line specs. But the newly launched Honor Play 3, which supposedly is the successor of the Honor Play lacks all of those traits. Honor Play 3 is basically a budget-oriented device, which happens to come with a triple camera setup at the back. The camera module on the rear panel packs a 48MP primary shooter, which happens to be the common features among the smartphones in 2019. An 8MP ultra-wide shooter and a 2MP depth sensor complete its triple-cam setup. Similarly, an 8MP selfie snapper rests on the front.

Talking about the front, the houses a 6.39-inch IPS display with a punch-hole cutout on the top. And it probably is the least expensive smartphone to have such kind of display. However, the display comes with merely HD+ resolution.

The Performance part of the device is handled by Kirin 710F chipset with either 4GB or 6GB of RAM at its disposal. On the memory side, the phone comes in 64GB and 128GB options. Additionally, you get an SD card slot, which lets you expand the storage even further.