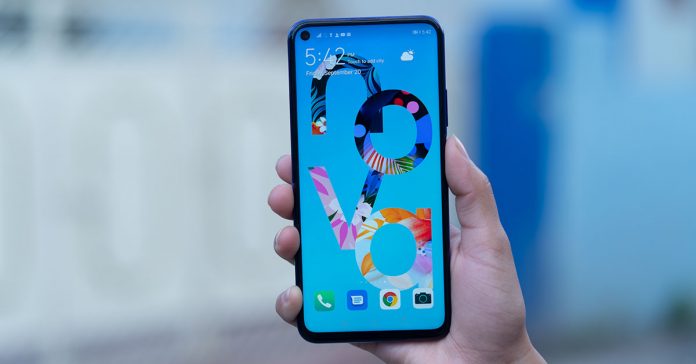 Targeting the approaching festive season, Huawei has launched a new phone in Nepal. And this time, they chose to bring the Huawei Nova 5T. The Nova 5T is a camera and gaming-centric smartphone with four cameras on it back and flagship Kirin 980 chipset. But what more features does the phone pack on the inside? Let’s talk about it.

Since the camera is the major highlight of the phone, let’s talk about it first. The phone embraces a quad-camera setup on the back. The camera quadruplet comprises of a 48MP main camera, which uses a Sony sensor and an f/1.8 lens. A 16MP ultra-wide-angle lens, a 2MP macro lens, and a 2MP depth sensor complete the camera module. On the front rests a 32MP selfie shooter right under the punch-hole cutout.

Performance-wise, you get the HiSilicon Kirin 980 chipset, which is the flagship SoC in Huawei’s arsenal. The performance is further complemented by 8GB of RAM. The phone also ships with GPU Turbo 3.0 software, which promises smoother gameplay even while playing high-end and demanding games. Talking about the storage, Huawei Nova 5T comes aboard with 128GB of onboard memory. However, you won’t get an option to expand the storage any further as the phone lacks an SD card slot.

On to the display front, Huawei Nova 5T features a 6.26-inch IPS panel with Full-HD resolution. Just like on the Galaxy M40, Vivo Z1 Pro, and the Samsung flagship devices, the Nova 5T also gets a tiny punch-hole cutout on the top of the display. Since there is no OLED panel, you won’t get the in-display fingerprint here. Awkwardly, Huawei managed to place the fingerprint scanner on the side. In addition, you will get Face Unlock feature as well.

The power supply to the phone is provided by a 3750mAh battery. Huawei has also included 22.5-watt SuperCharge support with which the phone gains up to 50% of charge just in 24 minutes.

The Nova 5T recently launched in Malaysia for the price of $379. Since Huawei Nepal usually keeps the price close to the international pricing, we were expecting the same this time around. So we expected that the phone would cost somewhere around Rs. 45,000. But it came as a surprise when we found that the device would cost Rs. 53,900 on the purchase. And that’s the arena where Xiaomi’s Redmi K20 Pro is doing well.

While comparing the Huawei Nova 5T and the Redmi K20 Pro, the K20 Pro has an OLED display, in-display fingerprint sensor, and telephoto lens in the camera. But we are yet to test and find the best features of the Nova 5T. So we will have to test it out in detail, which one offers better value for money. As of now, all we know is Nova 5T seems little too overpriced considering the competition. What do you think about it? Let us know in the comments. And also let us know what should be the pricing of Huawei Mate 30 and Mate 30 Pro, which are launching soon in Nepal.

Realme 5i launched in Nepal: Are you deliberately trying to let...

Facebook steps back from the decision to sell ads on WhatsApp