These bring a faster performance, support for dual-channel DDR4-2933MHz RAM, Intel Turbo Max 3.0, Hyper-threading technology across Core i3 to i9 processors, Thermal Velocity Boost (TVB), etc. And the top-of-the-line Core i9-10900K boasts 10 cores/20 threads and a maximum clock speed of up to 5.3GHz, thus taking the crown for the “fastest gaming processor.”

However, AMD’s 7nm-based Ryzen 9 CPUs still win out in terms of core & thread count, but Intel is hoping the brand loyalty & increased clock speed will drive up their business. Besides the processors themselves, the company also announced three new 400-series chipset motherboards; high-end Z490, mid-range B460 & H410.

The most exciting thing about the new Intel 10th gen desktop processors may very well be their pricing. Surprisingly, the high-end i9-10900K retails for $488 while its predecessor, the i9-9900K came with a higher $530 asking price. And the story continues in other members of the lineup as well; like Core i3, i5, i7 processors. Moreover, there are also ‘F’ suffix variants that come without Intel’s UHD 630 integrated graphics.

Let’s discuss a little more how the >5GHz mark plays an important role in the customer mindset. The current fan-favorite Ryzen 9 3950X with 105W TDP, which goes for a little less than the i9-10900K, has a slightly lesser clock speed measuring at 4.7GHz. However, the latter is also quite power-hungry with a TDP of 125W. So, keep in mind you’re gonna need some serious cooling power as well if you want all the raw power of these unlocked processors.

Intel’s Turbo Boost Max 3.0 is another welcome feature making its debut on Core-lineup of CPUs. Earlier, this used to be exclusive to the company’s professional & expensive “Xeon” set of processors. What it does is use driver & CPU-stored information to identify the two best-performing cores (favored) in the CPU.

Then, the lightly-threaded performance is boosted by assigning the user’s most critical workloads to the favored cores; without an increase in voltage. For even finer control of the CPU, you can also enable/disable hyper-threading on each core. That is thanks to the new Intel Extreme Tuning Utility (ETU). Still, it is yet to be known if this feature will be available on every one of the Intel 10th gen desktop processors. 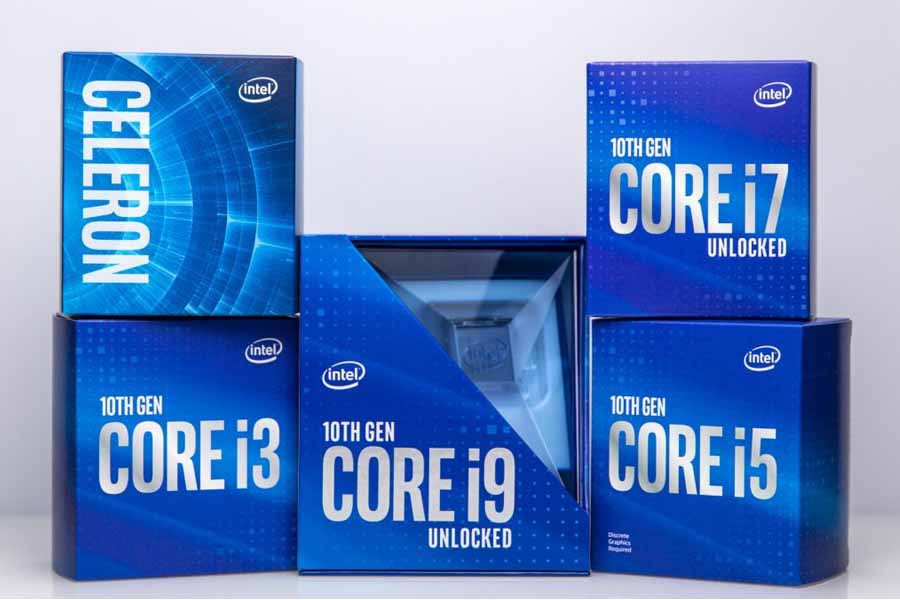 Furthermore, the 10th-gen Intel Core desktop processors also support Intel Ethernet Connection I225 & Wi-Fi 6 AX201. The former delivers more than 2X the network speeds of 1GB Ethernet on existing cabling. On the other hand, the Wi-Fi 6 AX201 promises up to 3X faster downloads for a reliable & lag-free experience.

Intel had also shared some performance benchmarks showcasing the superiority of the new 10th gen desktop processors. The company says users can expect up to 18% faster 4K video editing compared to its predecessors; and almost twice that in older CPUs. Additionally, Intel also says these can deliver up to 187fps while playing, streaming, and recording PUBG concurrently.