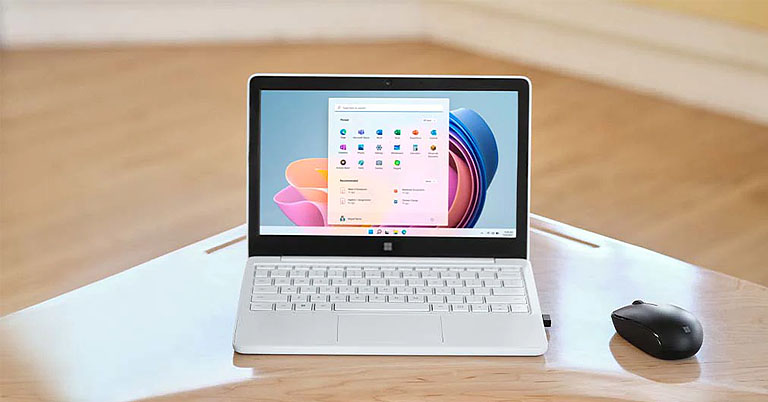 Microsoft recently unveiled the all-new Surface Laptop SE, which is aimed towards school students. Along with it, the company also announced Windows 11 SE, built specifically for students and schools. So, let’s get into the specs, features, availability, and expected price of the Microsoft Surface Laptop SE in Nepal.

The Surface Laptop SE boasts an 11.6-inch TFT LCD panel with 1366 x 768-pixels resolution. Now, this is Microsoft’s first Surface device with a 16:9 aspect ratio in more than seven years, after the company shifted to a 3:2 ratio for their Surface devices with the Surface Pro 3. Moreover, the device has a thickness of 0.70-inch and weighs around 1.12 kg. It features an all-plastic body and a hinge that goes up to 135°. The Surface Laptop SE is only available in the Glacier color option.

For security, the device features a nano security lock slot and firmware TPM. Fueling the Surface Laptop SE is a 35Wh battery that Microsoft claims can provide you up to 16 hours on typical usage.

In terms of software, this laptop boots on the new Windows 11 SE. This OS is intended to compete with Chrome OS and is tailored for Microsoft applications such as Edge, Office, and OneDrive. Similarly, it only supports a limited number of third-party apps and doesn’t even include Microsoft Store to download new apps. As per the company, it will bring a “distraction-free” environment for students.

Besides that, PC manufacturers like Acer, ASUS, Dell, Dynabook, Fujitsu, HP, and others will launch their Windows 11 SE-powered devices later this year and into 2022 as well.

Moving on, in terms of connectivity, there’s one USB-A, one USB-C, and a 3.5mm headphone jack. For charging, it has a barrel-pin connector on the right edge. It utilizes Wi-Fi 802.11ac (2×2) and Bluetooth 5.0 LE for wireless connectivity.

Furthermore, it has a 2W stereo speaker setup for audio and a 1MP front-facing camera with 720p resolution.

Surface Laptop SE is priced at USD 249 for the 4/64GB model while the 8/128GB variant costs USD 329. It will be available via authorized Surface Education resellers in early 2022 in Canada, Japan, the UK, and the US. We expect the price of Microsoft Surface Laptop SE in Nepal to start at NPR 35,000 if it launches here.