Home Lenovo Motorola Moto C Plus Review: Worth it or not for 13,999? 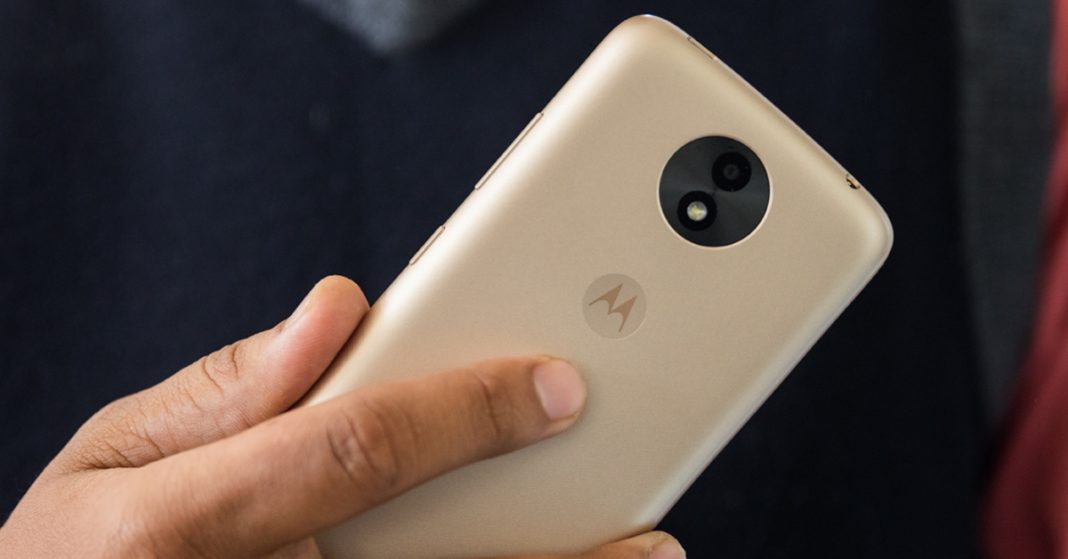 Motorola, an American multinational telecommunications company and the first mobile company to make handheld phones, has established itself all across the globe for its build quality and has recently stepped into the Nepali market on October 24, 2017 after an analysis of the ever-growing smartphone market here. LifeCom Pvt. Ltd. has been appointed as the sole authorized distributor of Motorola Mobiles in Nepal has brought budget-oriented Moto C-series and Moto E-series smartphones here in the country.

I got to play around with the Moto C Plus and test its specifications for a few days after the official launch. The phone priced at Rs. 13,990 seems to have set foot in the country with the aim of giving a competition to the budget-oriented smartphones in the market. Before moving on to the review, let’s take a look at what the phone has up for offer:

Key Specifications of Moto C Plus

My first impression of the Moto C Plus, hands down, was that the phone looked bulky. The plastic build of the phone is also questionable because similar range phones from Xiaomi and others offer metallic build. The phone is a bit chunky and also quite thick. 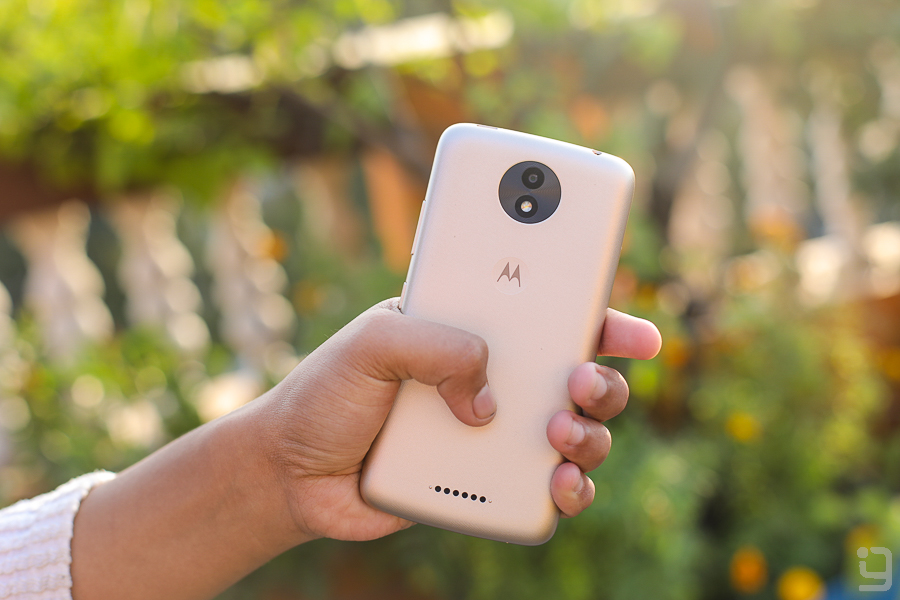 There is metal-like ring around the front face of the phone that has no functionality whatsoever and is actually made up of plastic. That made the phone look somehow tacky and I personally think the phone would have been better off without it. However, even if there isn’t much to say about the traditional build of the phone, it sure has been built very well and feels extremely solid. The curves and the micro-textured back of the phone a nice grip and finish to the phone.

The C Plus has a 5-inch HD TFT, scratch-resistant display with a pixel density of 294 PPI. Even if there is not an auto-brightness feature, the minimum brightness is suitable enough for night time usage. However, the maximum brightness seems questionable and somehow inadequate to deal with bright sunlight. This was quite bothersome. Also, I found the touch responses to be a bit slow at times. I had to keep repeating the same actions over and over again to make the phone respond. On the brighter side, the colors are natural and accurate. And the display’s resolution is good enough, if not exemplary. All in all, the display of the Moto C Plus is good enough for the price range.

The device is powered by MediaTek MT6737 chipset, which features a quad-core processor clocked at 1.3GHz. For graphics support, the phone comes with Mali-T720MP2 GPU. In terms of memory, the Moto C Plus incorporates 2GB of RAM and 16GB of internal storage that can be expanded up to 32GB via SDcard.

With features like app drawer and split window, running multiple apps and toggling between them was never a hassle. The phone does not have much screen space to offer but these features worked smoothly here. Also, running lighter games like: Color Switch, Tap the Frog and so forth was seamless. To test how the phone worked on running heavier games, I played Asphalt 8 on the phone, and the result was a bit disappointing as the game lagged a lot and even caused the phone to heat up pretty quickly. So the performance is just good enough and there isn’t much to explore. While similar range phones from other manufacturers (like Xiaomi) have already shifted to the more powerful Snapdragon 425 processor, the MediaTek chipset that this offers seems inadequate.

The Moto C Plus runs on Android 7.0 Nougat and comes with the latest stock Android. This is one of the most attractive features of the phone. Also, there is no bloat here and unwanted applications are also absent in this skin, which has helped to optimize the performance of the phone. The few touch-ups that Motorola has done on the Stock Android makes the UI experience very refreshing.

Another thing that I noticed here was that the phone does not have a default music player app. Hence, I had to download one immediately after I got the phone.

The UI elements here are completely bloat-free and hence they offer smooth usability to the users. However, this phone does not come with the ‘Moto’ app that is available in the higher priced phones from the company and hence, the smart motion gestures are unavailable here. Also, a few of the budget smartphones like the Colors P85+ Selfie Pro, Xiaomi Redmi 4 and so forth have fingerprint sensor in them, but this does not have one.

The volume and power buttons are placed on the left side of the phone. And due to the small length of the body, I could easily access these buttons. The navigation buttons are present at the bottom of the front panel. 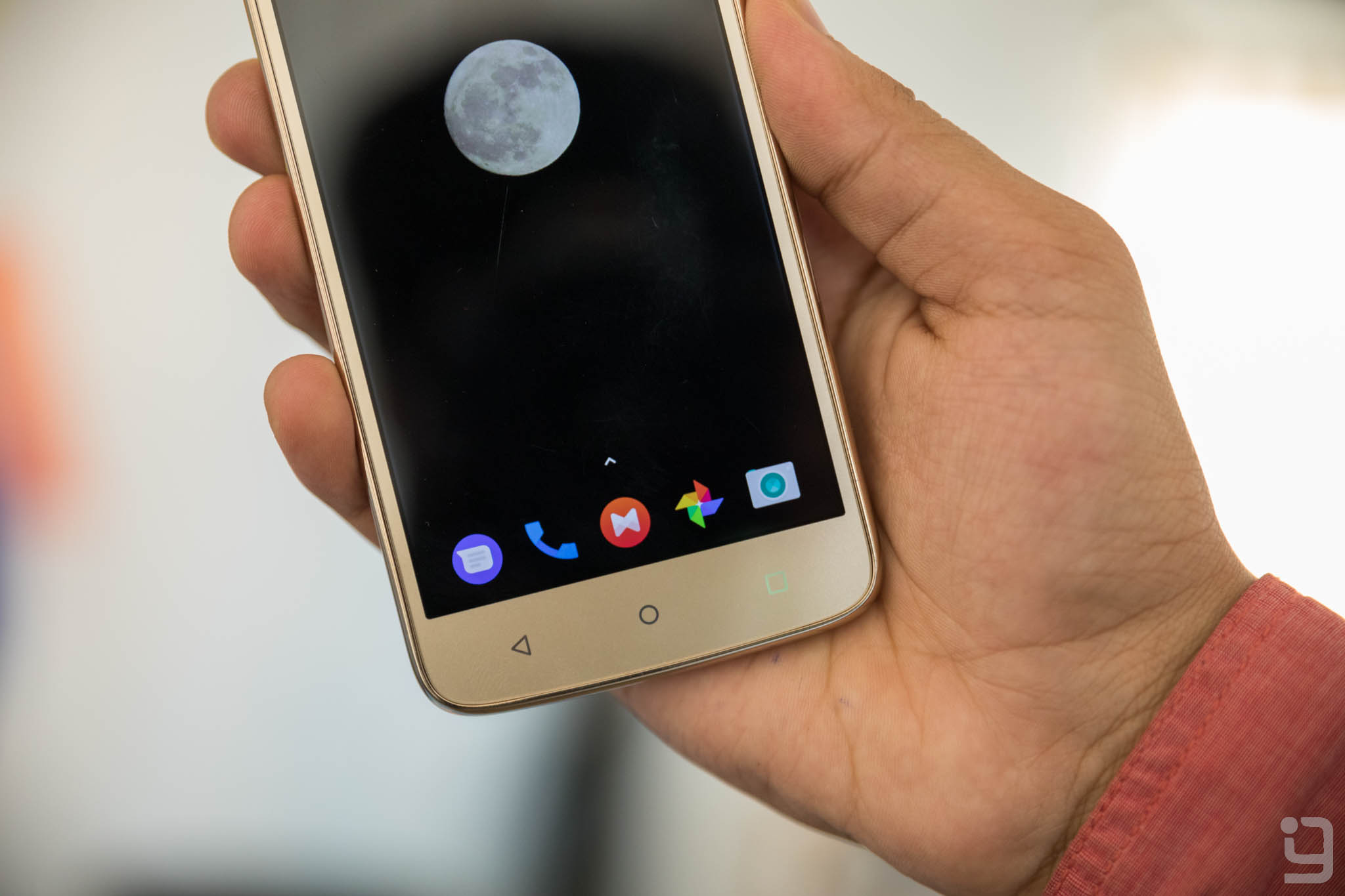 The phone houses a USB 2.0 charging port at the top along with the 3.5 mm headphone jack port. 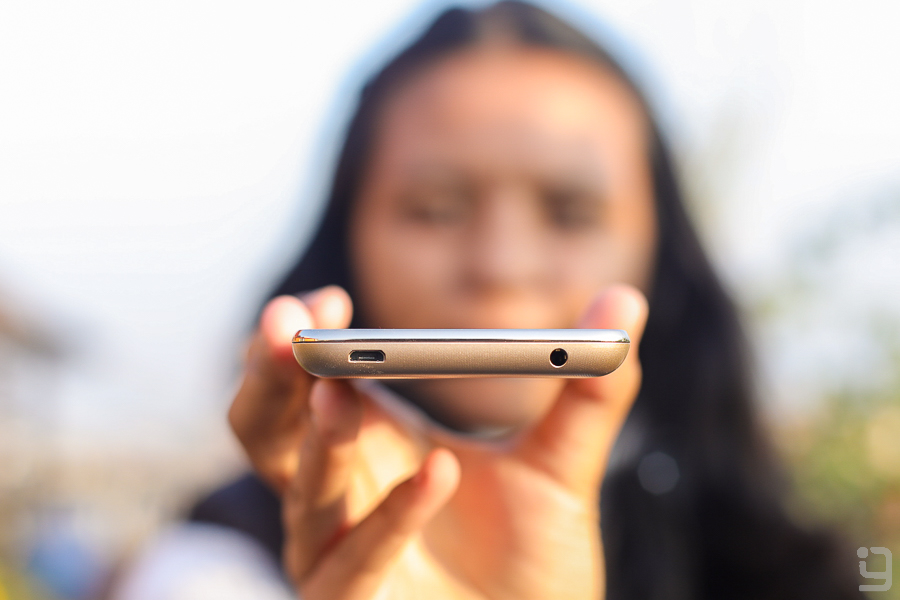 The phone features a really powerful speaker at the back which emitted good sound even at high volume, which was surprisingly nice. 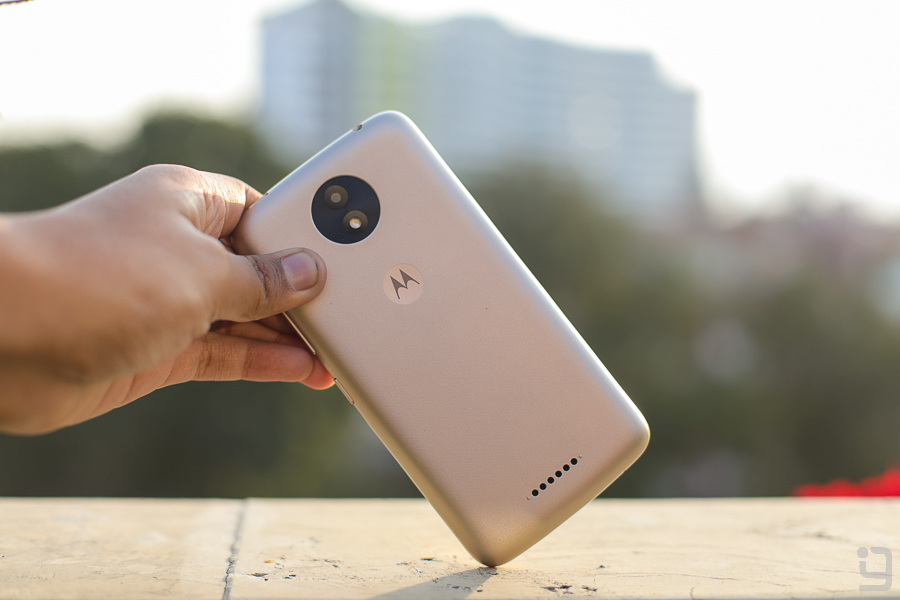 Upon ample lighting in outdoor situations, the rear camera delivers an okay performance. Outdoor shots with proper lighting are sharp and have natural colors but sometimes appear to have an yellowish tint to them. One thing that I liked about the phone is that the sensor in the rear camera fastens focus very quickly onto the subjects. The low light camera performance is nothing more than a struggle here. The pictures do not offer any clarity, if at all and are very noisy and pixelated. The front flash only helps to provide some lighting for the pictures but the pictures are still blurry.

The battery is the star of this phone. Backed by a massive 4000mAh battery, the phone provides almost over 5 hours of on screen time. During the few days that I used the phone as my daily driver, it lasted me well the whole day after a full charge and also had at least 20-25 percentage still left by the end of the day. There is also an inbuilt battery saver mode in the phone that saves the battery once that the charge hits 20% mark. I only had to enable the battery-saver mode once during my time with the phone. 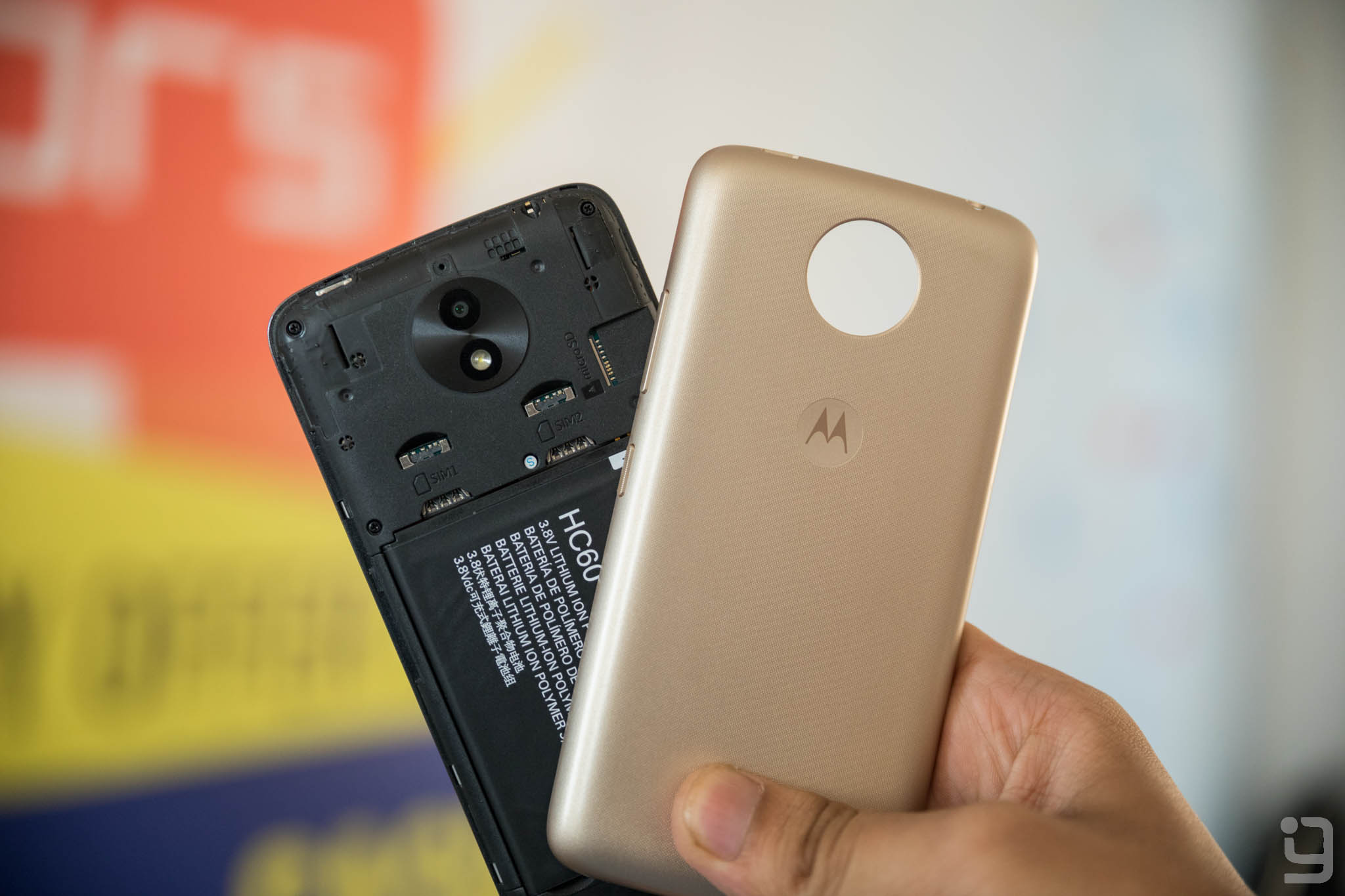 An additional wow factor in terms of the battery here is the fast charging functionality. However, the phone does not come with a charger compatible with this feature. It took me almost a little over two hours to completely charge the phone from level 0.

As the final verdict for my experience with the Moto C Plus, I must say that the phone is a stealer in terms of battery back up and the Stock Android UI experience, but the other features of the phone are not much of an attraction. When the market is already brimming with smartphones with sleeker designs and better performance features, this phone certainly has some tough competition.

Certainly, the battery back up is really commendable here. But the lags in the performance foreground and camera department cannot be easily overlooked. The bulky build might also be a liability here.

Pros: What I liked about the Moto C Plus

Cons: What could have been better in the Moto C Plus

What is your say about the Moto C Plus? Let us know in the comments below!