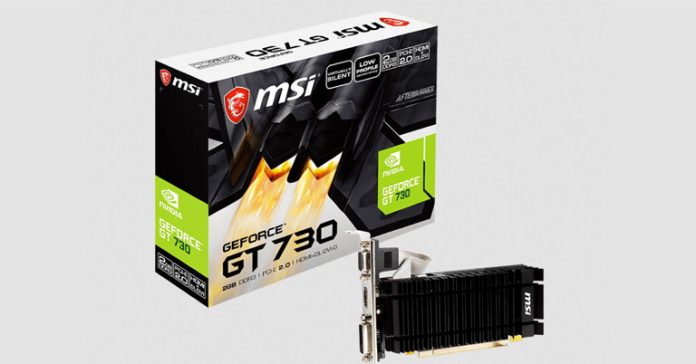 The graphics card scarcity isn’t going away anytime soon, at least not this year. In light of this, MSI has re-released the GeForce GT 730 (N730K-2GD3H/LPV1) graphics card. To recall, this card first debuted way back in 2014. It is now available in Nepal as well. So, let’s have a look at the specs, features, price, and availability of MSI GeForce GT 730 in Nepal.

Nvidia first introduced the GeForce 700 series in 2013, employing the Fermi, Kepler, and subsequently Maxwell architectures. The company has come a long way since then. While this “new” MSI card isn’t expected to be among the top GPUs this year, it does include a couple of features that integrated GPUs don’t.

Moreover, it supports a max display resolution of up to 4096 x 2160. Plus, it has DirectX 12, OpenGL 4.4 API support. It offers video outputs using DVI, HDMI, and D-sub ports on the card (one each). Furthermore, it comes with a big heatsink, which results in minimal operation noise.