Home Nokia Nokia 2.3 finally available in Nepal: Better than the Redmi 8A? 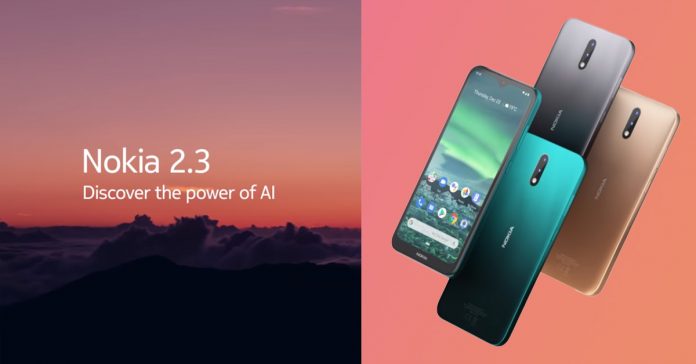 Nokia 2.3 is the company’s budget smartphone which comes with a bigger display, a juicier battery, and a better camera setup than its predecessor: the Nokia 2.2. The price of Nokia 2.3 in Nepal puts it head to head with Xiaomi’s Redmi 8A. So, which one should you choose?

The highlight of every new Nokia phone in the past couple of years has been its design. The new Nokia 2.3 incorporates the company’s signature design principle as well, with a new vertical ridge across the phone’s back. The overall build material is plastic while it has a metallic frame for that premium-y look. Add this to the 2.5D curved design, you get a better grip of the phone while simultaneously enhancing the appeal of the Nokia 2.3. The curved edges further add to the phone’s clean design. Here, the phone comes in three color variants: Cyan Green, Sand, and Charcoal.

Coming to the display, it has a bigger 6.2-inches “in-cell” (oof, that’s not a good name at all) IPS LCD panel. However, Nokia could’ve done a better job by upgrading to an FHD+ resolution but the Nokia 2.3 is still stuck with an HD+ panel. Of course, a higher resolution would deteriorate the battery life but there could have been an option to change between the phone’s resolution. In our review of the Nokia 7.2, we observed a slight discoloration on its display due to the rounded corners and we just hope the issue doesn’t reside on the 2.3 as well since it features a similar display cutout.

Well, mobile photography has taken off for quite a while now and a good camera setup is essential in almost every smartphone, regardless of its price. Acknowledging exactly this trend, Nokia has packed in an additional depth sensor on the Nokia 2.3 along with the primary lens.

Here, you get a 13MP primary shooter and a 2MP depth sensor for your portrait shots. On the front, there’s a 5MP selfie camera inside the waterdrop notch. Talking about the notch, while the Nokia 2.2 had a sharp ‘U’ shaped cutout, the company has opted for a subtler ‘V’ shaped waterdrop notch on the Nokia 2.3 which I think is the better of the two.

Though the setup may not look that impressive in the paper, Nokia is pushing the 2.3 as a budget camera phone and is providing some cool camera features. The most notable one is the “Recommended Shot” feature which takes 15 shots before and after pressing the shutter button. The phone then recommends the best shot among the bunch. Cool! Additionally, Nokia is also promising decent low-light photography on the Nokia 2.3. Moreover, you can select from 5 different effects (classic, rain, butterfly, heart, star) for the background blur that will make your portrait images standout.

Check out our review of the Nokia 2.3

Well, there’s nothing exciting to talk about the phone’s performance department since it equips the same-old Helio A22 found in the Nokia 2.2. It has a quad-core processor and the PowerVR GE8320 GPU. While other budget phones in a similar price range of the Nokia 2.3 are offering a better Helio P22 / P23 or Snapdragon 632, we as consumers have come to expect much more from budget phones as well. This is the one area where Nokia lags and I wish the company did something about that.

Moving on to the memory, Nokia 2.3 comes in a single 2GB RAM/32GB storage variant. It kinda makes sense that budget devices come on a single memory configuration. But 2GB RAM in 2019 just doesn’t seem like the right choice. It should’ve been at least 3GB in my opinion. However, as the phone is a part of the “Android One” program and thus runs stock Android, its RAM management should be fairly noteworthy. A big battery on a budget phone has kind of been a trend in the smartphone market these days. Generally, people in the market for a budget phone are not performance-oriented and just seek for a device with a decent performance that lasts them at least a day. Smartphone manufacturers have been clever enough to recognize this market demand and come up with phones packing a large battery.

In the case of Nokia 2.3, you get a 4000 mAh cell which is what you’re getting with most other budget phones these days. The AI-assisted battery intelligently tracks the app’s usage and helps to enhance battery life. Therefore, the company says the Nokia 2.3 will give you a 2-day battery. When thinking about it, it’s a budget phone targeted towards general users so I think it might just last for two days. We’ll just have to wait and see if the claim has any truth to it.

Nokia has a pretty good track record of updates on its smartphones. With Android One, the Nokia 2.3 will receive at least two years of OS upgrades and three years of monthly security updates. Therefore, you’ll be the first inline to get the best Android has to offer.

“A little help wherever you go.”

Also, Nokia has been pushing with a dedicated Google Assitant button in its smartphones and the Nokia 2.3 has got one as well. Though I doubt it’ll be natively remappable from the phone’s settings itself, there are many third-party apps for it anyways.

Nokia 2.3 Price in Nepal and Availability

The Nokia 2.3 closest competition is the Xiaomi Redmi 8A. So, which one should you choose? If you can live with Xiaomi’s heavily customized MIUI and the single rear camera set up, then Redmi 8A proves better. But, with the Nokia 2.3, you are getting a stock Android experience along with guaranteed updates. So, make a wise choice depending on your preference.