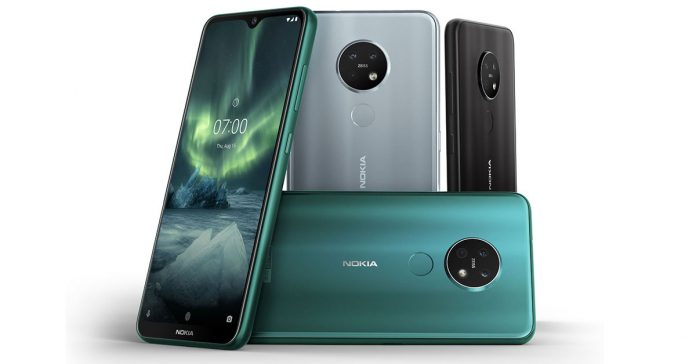 Oh, you’ve heard of Nokia. At its highest of highs and lowest of lows, the company’s been through a rollercoaster in the last couple of decades. Reminds me of the poem about King Ozymandias. Anyways, Nokia found its salvation through HMD Global, which has been bringing out its brand of smartphones on the market since 2016. The latest mid-range Nokia device to hit the Nepalese market is the Nokia 7.2, but is it the phone to look for under the 25,00 price range in Nepal?

Packing a pure Android experience, a sturdy build quality, and of course the nostalgic Nokia logo, its products have managed to garner mixed reactions from the crowd. The “mixed” part could be blamed on the pricing strategy. While Chinese manufacturers have been coming up with better phones at a cheaper price, the Finnish firm’s devices were a tad bit expensive, especially in Europe and other western markets. However, rejoice Nepalese Nokia enthusiasts because I have a piece of exciting news for you. The latest mid-ranger from the company – Nokia 7.2, has launched in Nepal exclusively through online channels. [Update: It is also available via mobile retail shops]

Imagine this article was about the Nokia 9 PureView. Then I’d have had to title this section as “Nokia 9 PureView Overview”. Boy, that would’ve been a mouthful! Talking about the Nokia 7.2, let’s start with its design. As with most Nokia phones, this one too has a premium-y build quality. It is built with a “high-tech polymer composite” which according to the company is 2X stronger than regular polycarbonate found in other mid-range or budget devices. Similarly, the phone is treated with a metal chassis finish giving it a stylish, yet grippy build. Both volume rockers and the power button are housed on the right side, while your SIM card(s) and microSD card will go on the left. On a related note, the power button also functions as a notification LED, which is kinda cool.

On the back, you’ll find the triple camera setup with Zeiss branding and a LED flash placed inside a circular bump, reminiscent of the long lost Nokia Lumia 1020. The main lens here is an HDR-enabled 48MP one, with quad-pixel binning technology. While this may not stand head-to-head against Google’s Night Sight, it’s still something. There’s already a GCam port for the Nokia 7.2 so don’t scratch your head too much. Additionally, a fingerprint sensor is present just below the cameras.

Moving on, there’s an 8MP ultrawide sensor with a 118º field-of-view and a 5MP depth sensor for portrait shots. Coming to the front, you get a single 20MP lens inside the teardrop notch for your selfies. As a matter of fact, the front camera also embeds the Pixel Binning technology.

Nokia 7.2 has a decent 6.3-inch IPS LCD Full-HD+ (2280 x 1080) panel. This may be a bummer to some since its direct competition in the Nepalese market, the Mi A3 boasts a more vibrant AMOLED panel, though with a lower HD+ resolution. Adding insult to the injury is the dated Corning Gorilla Glass 3 protecting the phone. However, Nokia’s proprietory “PureDisplay” technology transforms every content in real-time to HDR which is something to be joyous about.

Though there’s a small cutout on the top for the selfie camera, the phone has a significantly noticeable bezel on the bottom with “Nokia” branding. It may be a turnoff for some, but personally, I like it.

Let’s get to the performance department. Since Nokia 7.2 is a mid-range device, you’re bound to get a mid-range chipset as well. That’s just how it goes. However, Nokia has gone with the 2-year old Snapdragon 660 chipset here, rather than something new like the Snapdragon 665 inside the Mi A3. Bummer! The processor is ok to put it nicely, but Nokia could’ve made a better choice nonetheless. On the memory front, you get either 4/6GB of RAM and 64/128GB of internal storage. The one launching in Nepal will have a 4/64GB configuration.

Similarly, the phone is a part of the Android One program.
Bloatware, be gone!
Thus, you get stock Android experience and the fastest software and security updates. Nokia 7.2 runs on Android 9.0 (Pie) and will get the latest Android 10 update fairly soon.

HMD has upped the battery capacity on the Nokia 7.2 to 3500 mAh from its predecessor’s mere 3060 mAh. Though it’s not that huge of an upgrade, we’ll take it nevertheless. The phone’s AI-assisted Adaptive Battery should, in theory, help the juice running a little longer but I wouldn’t put my 100% faith in that. Charging the phone could be a hiccup to most people since it supports only 10W charging which is pretty slow to today’s standard.

Other notable features of the phone include a dedicated Google Assistant button on the left, which can be remapped using third-party applications. Similarly, you get a 3-months 100GB Google One subscription for free.

Nokia 7.2 Price in Nepal and Availability

The official price of Nokia 7.2 in Nepal is Rs 23,999 and it is available through Sastodeal.com and offline mobile retail shops across Nepal. The pricing looks great because it was launched in Europe with a hefty €300 price tag.

Is the Nokia 7.2 the best phone under Rs. 25,000? Well, if you want stock android experience, regular updates, and good design, Nokia 7.2 would be a decent choice. However, you do get better performance and cameras on the Redmi Note 7 Pro. So, the choice is yours!

Watch our Review of Nokia 7.2 here: