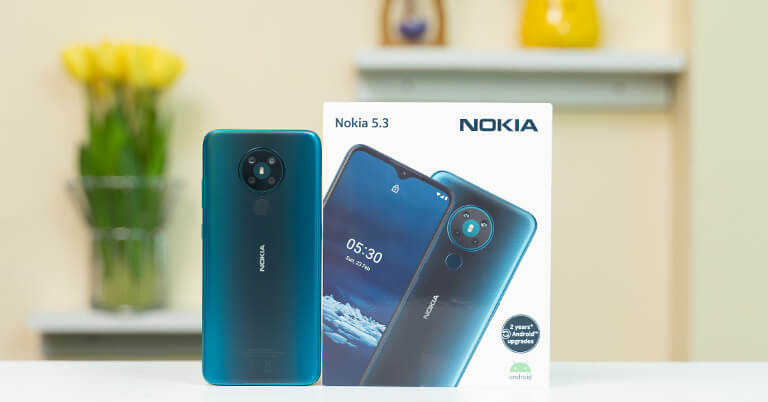 After having launched a couple of feature phones and a budget smartphone in Nepal in the past couple of months, Nokia has now come up with a mid-range device. It’s non-other than the Nokia 5.3. If it wasn’t for the ongoing pandemic, the phone was supposed to be available in the country way back in May. However, things obviously didn’t go as planned. Anyway, let’s take a look at what the Nokia 5.3 is packing including its specs, features, official price, and availability in Nepal.

Nokia 5.3 is actually the successor to the Nokia 5.1 and 5.1 Plus. While 2018’s Nokia 5.1 came with big bezels at the top & bottom, the company had opted for an iPhone-like notch on the 5.1 Plus. And now, the Nokia 5.3 takes it a step further by including a small teardrop notch and a sizeable chin which houses the Nokia branding. It has a nicer polycarbonate back with a matte finish which the company says is scratch-resistant too. 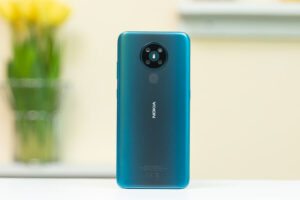 In a typical Nokia fashion, there’s a dedicated Google Assistant button which we’re assuming from experience can’t be natively remapped (although it is possible using a third-party app). The slightly curved back houses the quad-cameras inside a circular module and a physical fingerprint sensor beneath it. There is yet another Nokia branding parallel to these – this time left-rotated. The phone is available in “Nordic-inspired” Cyan, Sand, and Charcoal color options.

Getting to the display, Nokia 5.3 comes with a sizeable 6.55-inches IPS LCD panel protected by Corning’s Gorilla Glass 3. Unfortunately, it’s just an HD+ panel so sharpness is of concern. With an aspect ratio of 20:9, this phone also boasts TÜV Rheinland certified against harmful blue-light protection. At this stage in the market, a teardrop notch feels outdated which is another major disadvantage on Nokia’s end. If you’re not a fan of this, you can also hide it under the settings for a traditional bezel-esque look.

Running the whole show is Qualcomm’s Snapdragon 665 which has been coupled with up to 6GB of RAM. Similarly, the storage option remains consistent with every memory config at just 64GB. There is a dedicated microSDXC slot to expand this, so that’s nothing to worry about. Stock Android fans will most definitely appreciate Nokia’s clean UI/UX. Here, Nokia 5.3 ships with Android 10 and is also a part of Google’s Android One program.

What this means is that it will be getting guaranteed OS updates for at least 2 years and three years of security updates. Despite these, the performance on this thing is of concern as the Snapdragon 665 isn’t as competitive as other silicons found in competing devices like Samsung’s Galaxy M21 and the Redmi Note 9. With a similar spec-sheet, Nokia 5.3 is expensive than the Realme 5i which we’d complained about its non-competitive pricing. 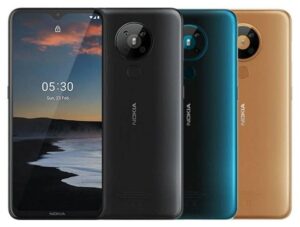 Moving on to the cameras, the phone features a quad-camera setup at the back packaged inside a circular module with the LED flash in the middle. As a result, Nokia 5.3 manages to stand out among the crowd – at least when looking at it from the back. Leading the setup is a 13MP primary sensor. Other lenses include the 5MP ultra-wide, 2MP depth, and 2MP macro sensors.

Its AI imaging lets you take enhanced photos including a portrait mode. Nokia 5.3 is also capable of taking decent low-light images thanks to its dedicated Night Mode. On to the front camera, there’s an 8MP lens sitting inside the teardrop notch. Besides the fingerprint sensor at the back, you can also use the front camera for face unlock.

Finally, let’s talk about the battery. Nokia 5.3 packs in a moderate 4000mAh cell which charges via USB Type-C connection. Unfortunately, the phone relies on the traditional 10W charging although the chipset is capable of handling 18W of power.

The 4000mAh battery doesn’t compare to what Xiaomi and Samsung are offering – at least in terms of sheer capacity. Despite this, Nokia claims that it is a 2-day battery phone thanks to its AI-assisted Adaptive Battery. If the past is any indication, that should be true to some extent though wait for our full review for the ultimate verdict on Nokia 5.3’s battery endurance.

Nokia 5.3 Price in Nepal and Availability

Nokia 5.3 is now available in Nepal where its price is NPR 23,499 for the sole 4/64GB variant in the Cyan color option. There is no word yet if other variants will be made available in the coming days.