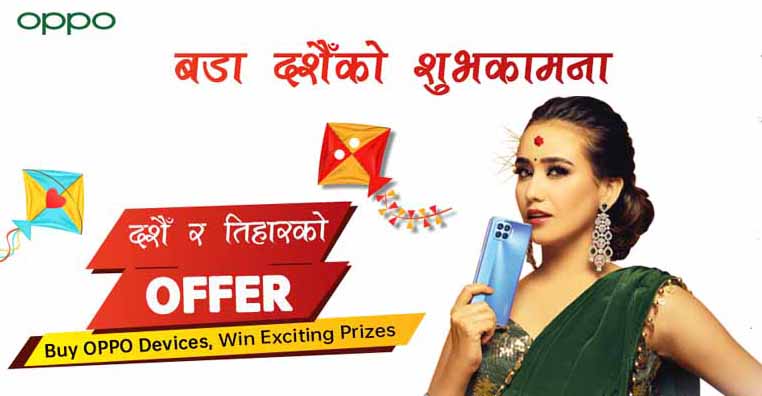 To celebrate the upcoming festive season, Oppo Nepal has announced the “Dashain Ra Tihar Ko Offer” SMS campaign. The campaign will be conducted in three different stages and lucky customers will be able to win Oppo mobile accessories as well as smartphones as prizes. Let’s learn more about the Oppo “Dashain Ra Tihar Ko Offer” SMS campaign, including the steps for participation, prizes, and details about winner selection.

Oppo Nepal will be conducting the SMS campaign in three different stages. The first stage has already been started since 8th October and the third stage will end on 14th November. Anyone who has bought a brand new Oppo smartphone or other IoT devices during the validity period will be eligible for the lucky draw. For participation,

The first stage of the contest will run until 16th October. Similarly, the second stage will start the next day and will run until 22nd October. Finally, the third and final stage will run from 7th November up until 14th November. The lucky draw will be conducted on Oppo Nepal’s official social media platforms (Facebook, Instagram) on 17th October, 23rd November, and 15th November, respectively.

In each lucky draw, five lucky winners will be selected among the participants. The winner of the first prize will receive a brand new Oppo F17 Pro. The second prize winner will get a 41mm Oppo Watch. Oppo is offering Oppo A1k as the third prize. Similarly, the fourth and fifth prizes are Oppo Enco W51 and Oppo Enco W11 TWS earbuds. Single participation will be valid for all three stages.

Oppo “Dashain Ra Tihar ko Offer” will end on 14th November after its commencement on 8th October 2020. The summary of the three stages is in the table below: