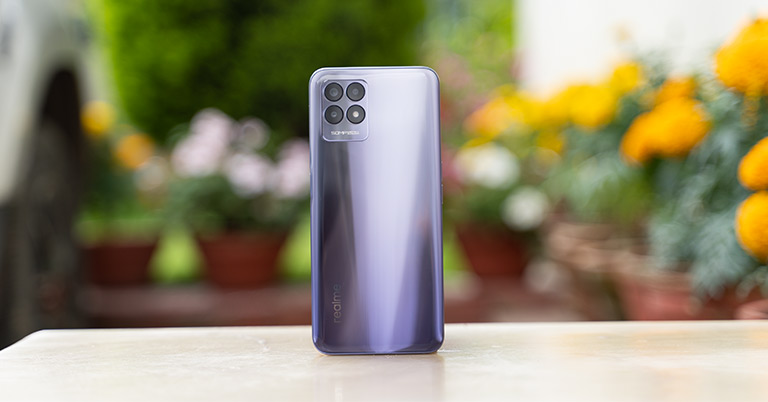 It’s a new day, and I’m with yet another Realme smartphone review. Here, I’m carrying the new Realme 8i—the successor to last year’s Realme 7i—and the lowest rung on the 8-series ladder. The device brings upgrades over its predecessor while there’s a significant run-down in cameras. So, allow me to discuss more about the Realme 8i in this review.

Starting with the design, it’s pretty much what we’re used to seeing on a mid-range smartphone. The phone has an all-plastic build and a reflective finish on the back. The shiny surface may attract your attention when put as a showpiece in a store, but mind that it is prone to fingerprints and smudges. Thus, I always wrap it in the transparent silicone case included in the box and recommend that you do the same. 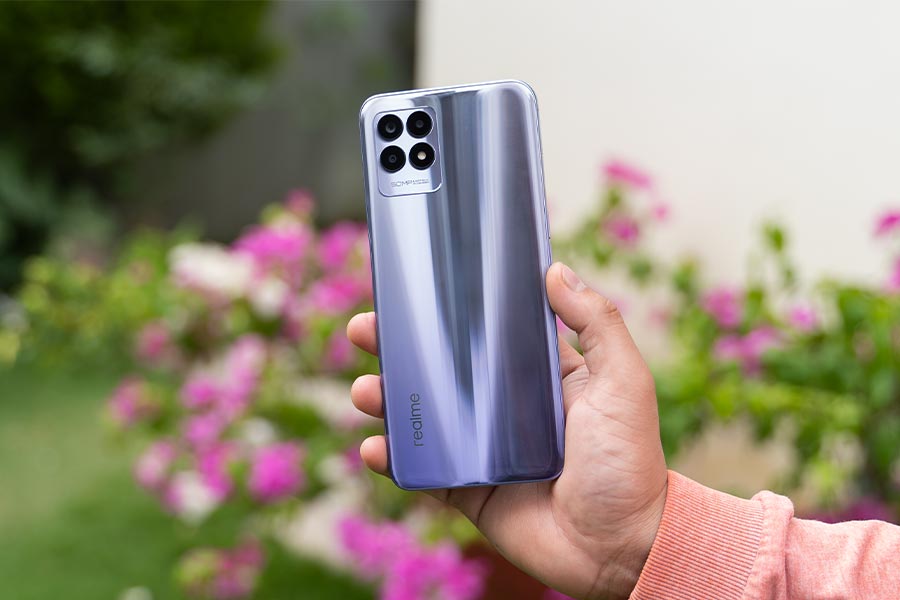 Anyway, weighing 194 grams and measuring 8.5mm thick, the 8i is a comfortable fit in my hands. The device’s back also features slight curves that help attain a strong grip.

Moving on, there’s a fingerprint sensor on the side that works effectively in most situations. Though, as expected, it struggles to recognize the fingerprints with sweaty hands. Additionally, a thing to note here is that the 8i lacks a secondary microphone. Although it’s a minor detail, it is critical for noise cancellation and clearer calls. And Realme shouldn’t scrimp on such a basic feature—at least with an INR 14,000 (NPR 23,799) phone.

On the front, the Realme 8i has a 6.6-inch IPS LCD panel with 100% DCI-P3 color space and a screen-to-body ratio of 90.8%. In comparison to its predecessor, the screen resolution has been bumped to FHD+, which indeed improves the overall viewing experience. The color reproduction here is good and the screen looks well-saturated as well. 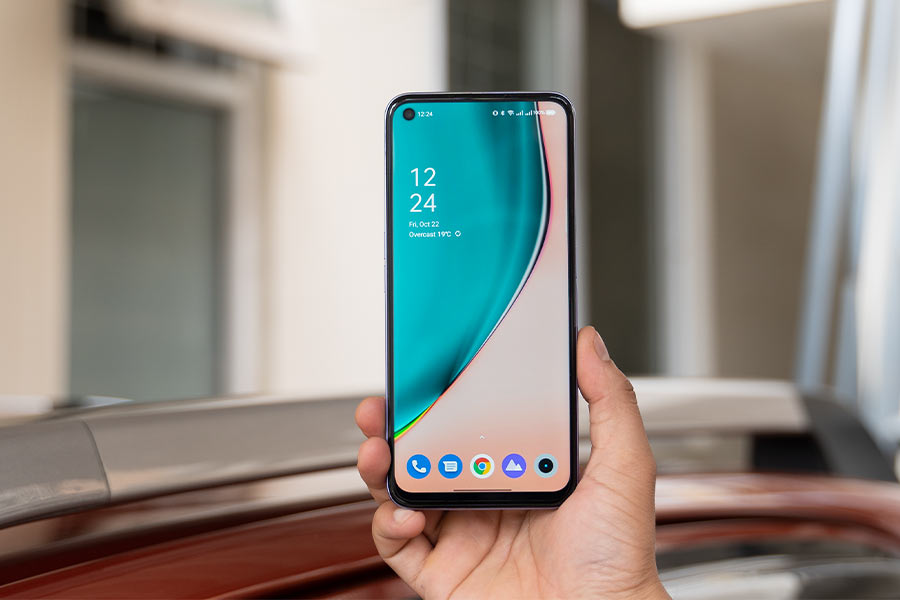 The refresh rate also sees a healthy upgrade from 90Hz to 120Hz this time, while there’s a 180Hz touch sampling rate support too. As a result, scrolling through apps or my Twitter feeds felt smoother and I had no trouble navigating through the phone’s UI. Also, the display self-adapts the refresh rate between 30 to 120Hz based on the tasks on the screen, which further aids in battery conservation.

Moreover, the panel boasts 600 nits of peak brightness. Thus, it can get plenty bright for indoor use while the outdoor use is also satisfactory—albeit the colors look slightly dull under direct sunlight. Aside from this, the device features Widevine L1 certification and supports Full HD streaming on OTT platforms like Netflix.

Moving on in this review of the Realme 8i, let’s now shift the gear to the performance. Powering the phone is a MediaTek Helio G96 chipset coupled with up to 6GB of LPDDR4X RAM and up to 128GB of UFS 2.1 storage. Moving on, it enjoys virtual RAM expansion by up to 5GB. Unfortunately, the 4/64GB variant that I have with me doesn’t support this feature. As evident from our past tests, the extended RAM feature is clearly nothing to be excited about—so I don’t really miss it either.

Also, if Realme actually thought virtual RAM is of any use to its customers, wouldn’t it make more sense if it were available on the lower-RAM variant instead of the one with already a spacious amount of RAM?

Regardless, the G96 has easily handled my daily usage. And thanks to the 120Hz refresh rate, navigating and launching apps is a breeze too. Plus, the Realme UI 2.0 on top of Android 11 is well optimized as well, but the caveat here is that it comes with tons of bloatware apps.

Now, leaving these things aside let me talk about the processor itself. Although the Helio G96 technically sounds like the successor to the G95, I deem it to be the inferior one. Like the G95, it is fabricated on a 12nm process and features two Cortex-A76 and six Cortex-A55 cores. However, the GPU is where the G95 excels as it has Arm’s Mali-G76 MC4 onboard, while the G96 on the 8i has an inferior Mali-G57 MC2 GPU.

To see what I’m getting at, just look at these benchmark scores where the 8i’s G96 is clearly lagging behind the G95 on the Realme 8—most significantly so on the GPU front. In terms of 3DMark (Wild Life), we can see a difference of nearly 400 points between the two.

Hmm, then what about gaming? In PUBG Mobile, it can go HD graphics and High frame rates where it runs without any stutters. But for the smoothest of experience with very little heating, Smooth graphics and Ultra frame rate yields a better result.

Similarly, Pokémon Unite which offers 60fps gameplay is indeed playable at 60fps and is quite optimized. I didn’t face any heating issues either, yet it does get slightly warm around the camera module. So, the most I can say is that the G96 does provide stable performance, but don’t anticipate any boost over the G95.

When it comes to cameras, the Realme 8i is the underdog compared to its predecessor. The 7i had a quad-camera setup headlined by a 64MP lens, whereas the new 8i brags a 50MP triple-camera setup and misses out on a dedicated ultra-wide lens.

To compare, the Redmi 10 Prime which costs less than 8i features an ultrawide sensor. Anyways, accompanying the primary lens is a B&W sensor and a 4cm macro camera. Over on the front, there’s a 16MP selfie shooter.

Here, the daylight photos from the primary sensors look pretty nice. They feature a balanced color tone and good dynamic range, thereby looking pleasing to the eyes. However, the shadows lack depth, and the image has a slightly warm tone to them. It also has difficulty maintaining exposure at times.

As for portraiture, the first thing that strikes is how oversaturated the greens on the backdrop are. As a result, images look a bit unnatural. Furthermore, their color balance is poor, and it suffers from relatively poor edge detection.

On the other hand, the selfies appear oversharpened and have a subtle reddish tint to the skin. It does, however, have a good dynamic range.

Moving on, the selfie portraits have a balanced color profile, but as the normal portrait shots, it does require improvement on edges.

Now, under a low light condition, the images from the Realme 8i are lacking in terms of details. The photos come off murky, and it also struggles to maintain light flare.

Yet, turning on night mode improves the scenario. It readily adjusts exposure and light glares, and its HDR processing ensures that the image comes bright.

Then there’s the gimmicky macro lens. Unsurprisingly, they miss out on sufficient details. Nonetheless, unlike other Realme phones, it does not oversaturate the greens.

On to the video side of things, the Realme 8i can record at up to [email protected] resolution. It has an ultra steady setting too, without which the video comes off quite shaky. Obviously. However, there is little-to-no difference in terms of stability even after turning on the Steady Mode. It also suffers from exposure flicker at times.

Moving on to the battery, Realme 8i packs a 5000mAh cell that supports 18W fast charging. While the battery endurance is pretty good, the charging time is quite a drag here. With my daily usage which includes hours of social media, video streaming, a few game sessions, clicking photos, and others, it managed to give around 7 hours of screen time.

As for charging, the 18W adapter takes around 2 hours and 30 minutes to fully juice up the battery. So, Realme should have offered 30W charging support here since even the Narzo 30 launched earlier this year at a similar price gets the 30W treatment. For audio, the Realme 8i features a mono speaker at the bottom. Its output is loud enough for watching videos and playing games—although it certainly won’t wow the audiophiles. The highs are rather noticeable, but there is hardly any presence of bass.

However, if you want a stereo sound experience, on an even more affordable device, then I would recommend going with the Redmi 10 Prime. Similarly, the call quality is decent as well and the earpiece sounds loud and clear.

To wrap up this review, I’d say that the Realme 8i is a pretty decent budget phone. It performs admirably in all areas, and the fact that it brings a whole lot of improvements over its predecessor is a commendable effort by the company. Yet, the Redmi 10 Prime gives the 8i a serious run for its money, with nearly identical specs and a lower price tag.

And if you’re intending on getting the 8i’s higher variation, I recommend adding a little more cash and going with the standard Realme 8 instead. With this, you’ll be getting better performance, cameras, and display for a comparable price. Finally, I would advise Realme to do something extra to make their next iterations of the ‘i’ series a compelling deal.

Realme 8i Review: Pros and Cons