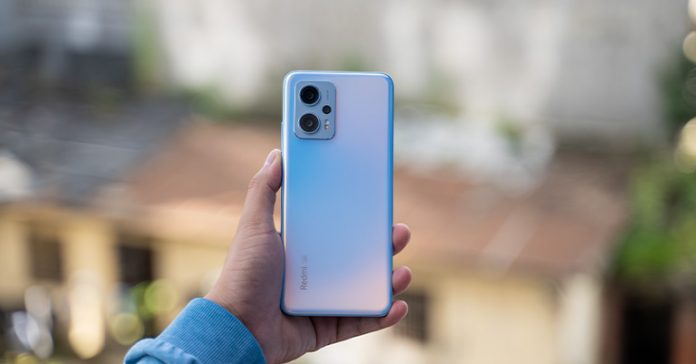 If there is one smartphone that is popular after the Nothing phone (1) right now—well at least in this part of the world—then it’s this guy, the Redmi K50i. And it’s all because of the excellent performance it offers in its class.

It costs some Rs. 25,999 in India for the base 6/128GB variant. And for this price, the K50i has some premium features onboard—the best of all being the MediaTek Dimensity 8100 chipset. If you remember, this is the same chipset you get on more expensive phones like Realme GT Neo 3 and Oppo Reno 8 Pro.

Here, what I really like about Xiaomi and Poco is that for the past 3-4 years, they have been continuously bringing in powerful gaming phones at a relatively affordable price. We first saw this back in 2018 with the launch of the Poco F1, and then the Poco X3 Pro last year. And in 2022, we have the Redmi K50i, which also goes by the name Poco X4 GT in other parts of the world.

Also, what’s great to see with every iteration is how Xiaomi is improving them. Not just on the gaming front but also in other aspects. This makes these phones attractive not just to a niche audience like gamers, but to the general users as well! But first, let’s go over the highlight of the Redmi K50i in this review—its performance.

Here, on top of Dimensity 8100 SoC, Xiaomi also offered flagship-grade LPDDR5 RAM and UFS 3.1 storage on the phone. With all this, the Redmi K50i simply offers the best performance per dollar in its class. Just take a look at these benchmark scores; the K50i has way better performance than any other smartphone in a similar price range.

And it directly translates into gaming performance too. Titles like Genshin Impact which take a toll on the GPU can run at the highest of settings. Here, the K50i was able to achieve a stable 30fps on average with 96% stability.

Under this, you’ll find the phone getting slightly warm near the camera module. But the Liquid Cooling 2.0 solution of K50i does a pretty good job of maintaining the thermals. After 30-35 minutes into the game, we graphed the CPU and battery temperatures climb to 43ºC and 40ºC, respectively.

To further check its sustained performance, we also ran a 20-thread CPU throttling test for 15 minutes, 30 minutes, and 1 hour. Despite these demanding conditions, the K50i was able to keep its graph green with the CPU throttled to over 90% of its maximum performance in all case scenarios. So no major throttling issues and such.

Anyways, comparatively less demanding titles like PUBG Mobile can hit up to HDR graphics and Ultra frame rates. Under this, the game is playable smoothly at 40fps with 100% stability. But I know most of us would prefer smoother gameplay, so there’s also the option to play at 90 frames per second in the Smooth graphics settings.

But, for some reason, the frame rate drops to 60fps from 90fps after just 45-50 seconds into the game. So looks like Xioami is still to make a refinement here.

Newer releases like Apex Legends can also yield a stable 60fps gameplay in Normal graphics and Ultra Framerate. Since the smartphone also supports a high refresh rate of 144Hz I also played a few 120fps games. Injustice 2 is well playable at 120fps. But Critical Ops—which is also a 120fps-ready game—is restricted to just 60fps here.

Aside from gaming, the Redmi K50i is also a reliable device for your everyday tasks. The 6/128GB variant of the phone that I have with me has no issues regarding memory management. So you can expect a great multitasking experience on this device.

The experience gets even better with the well-optimized Android 12-based MIUI 13 interface. The UI experience is similar to that of other Xiaomi and Poco phones. But most importantly, I haven’t faced any software-related issues here, which is something Xiaomi phones are most prone to. Further sweetening the deal is the fact that K50i is guaranteed to receive 2 years of platform and 3 years of security updates.

Besides sheer performance, another thing that’s great about this device is its display. The K50i has a 144Hz screen with a 270Hz touch sampling rate, which results in a smooth scrolling experience and precise touch response. Plus you also get a 7-stage refresh rate support, which allows the display to switch between different refresh rate stages based on the content on the screen. But what’s great here is the quality of the screen itself. 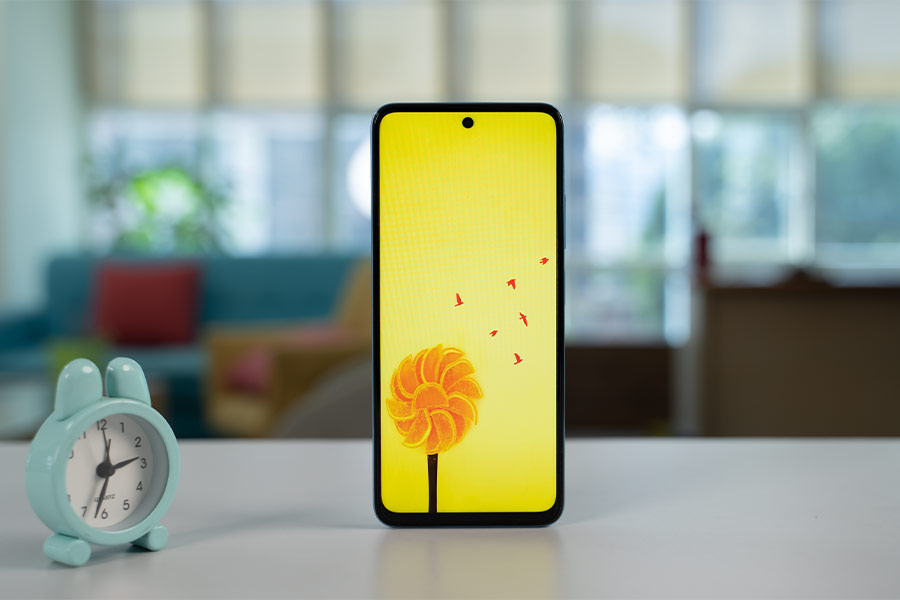 Don’t get confused, it’s still an IPS LCD display. But Redmi has used what it calls a Liquid FFS or fringe-field switching technology that brings advantages like enhanced image quality, and wide viewing angle. From my usage, I can certainly assure you that this screen can reproduce great colors. Sometimes I even forget that this is an LCD panel while watching content on YouTube—it’s that good!

Along with that, there is Dolby Vision and HDR10 support as well. And it works perfectly fine on Netflix and other OTT platforms, so watching movies and series have been a slightly better experience. It’s not a big difference per se, but it is noticeable if you ask me.

But something that could’ve been a bit better in the K50i is its speakers. No, Xiaomi did not cut corners by including a mono speaker. The phone does have a stereo speaker setup that can get loud enough to complement your movie-binging experience.

However, its overall sound quality lacks the amount of depth I’m used to when listening to music on Spotify. Luckily you get a 3.5mm headphone jack to plug in your wired earphones.

Also, I’m really satisfied with the haptics on the Redmi K50i. Here, you get an X-axis vibration motor which feels pretty crisp and precise when you type on the screen—just the way I like it.

Now, design-wise, Xiaomi has given some good color options with the Redmi K50i. I like the Phantom Blue color among the available options, which is why I got this one. What I appreciate about this shade is that the back panel has this nice gradient effect that adds to the premium-ness of the device. And even with such a reflective finish, it doesn’t catch any fingerprints or smudges. Of course, this is all plastic material, as we’re used to on a mid-range smartphone. But despite having a plastic build, the K50i is a bit heavier and thick phone. So it did take me a couple of days to get used to this form factor. After a while though, it gets quite comfortable on the hands—thanks to its ergonomic design. And its weight distribution is also even across the chassis, so that’s nice too.

Yet, there are some flaws in its design. The most concerning of all is the placement of the SIM tray next to the microphone. There were a couple of instances where I accidentally inserted the SIM ejector pin into the microphone hole.

Xiaomi could have easily shifted the SIM tray to the left frame of the device instead. So in uncertain conditions, there are chances that you might damage this bottom microphone.

The company did make up for it with rubber seals on the SIM tray. But that does not give the same level of confidence to use it in wet conditions as an official IP rating would. On a positive note, Xiaomi has protected the front of the device with Corning Gorilla Glass 5 protection.

In this Redmi K50i review, let’s talk about cameras now. It’s one of those areas where I was skeptical about K50i’s outcome since a great performance often comes at a cost of below-par cameras. But I was pleasantly surprised to find out that the K50i can capture decent—if not great—pictures.

As you can see, the K50i can click some good images in well-lit conditions. The contrast is a bit high in general, but the photos still have a good amount of detail.

I also compared its cameras to the Realme 9 Pro+, and with the flagship-grade Sony sensor, Realme images have better HDR and dynamic range in some difficult situations.

This is also true in ultrawide shots, and Realme photos have slightly better details. But it’s something I would not nitpick on a performance-centric phone.

Now, the portrait is the one area where the K50i delivers strictly average results. For some reason, it turns the skin tone reddish, which looks quite unnatural.

Realme, on the other hand, maintains a good skin tone with better exposure maintenance.

The selfies on the Redmi K50i did not impress me either. The reddish skin tone can also be seen in the selfies, and this time the photos are a bit contrasty too.

In general, the Redmi K50i struggles to maintain a good color tone when taking pictures of human subjects—whether it’s from the front or back camera. So, this is one area in which the company could improve with the next OTA update.

Moreover, Realme’s default images at night are also comparatively better than K50i’s, especially in low-light scenarios, thanks to its OIS-backed cameras.

But in well-lit conditions, even the Redmi K50i can take good photos with a balanced exposure. Still, there is some noise in the photos which eventually improves in the night mode. And, the details and sharpness get better as well.

As for the videos, both smartphones can record up to [email protected] videos. Even though Realme does not utilize its OIS module for stabilization in this mode, its videos are still more stable than the K50i.

You can achieve better stability with the steady video mode in K50i but it lowers the resolution to 1080p. Even so, the colors and contrast look better from the Realme 9 Pro+.

Similarly, for selfie video, neither of the phones offers 4K recording from the front cameras. But despite being a camera-centric phone, Realme doesn’t even provide a 1080p 60fps mode which is present on the K50i. Yet, I did find its field of view to be a bit narrower and it also struggles to maintain exposure in the background. The overall video stabilization is pretty decent though. Finally, talking about its battery backup, Redmi K50i is an easy one-day smartphone. With my routine activities, I was able to get 7-7.5 hours of screen-on time. And charging this thing is pretty efficient too since it gets juiced up via a fast 67W adapter. It charges from 0 to 50% in just 18 minutes, and a full charge takes about 50 minutes.

So, after using the Redmi K50i for the time period of this review, for the most part, I am really satisfied with it. The K50i is undoubtedly a treat for gamers looking for a reliable performer under Rs. 30,000. But, even if you choose it as your everyday smartphone, I am certain that it will satisfy you with its overall performance.

I find most reviewers complaining about the lack of AMOLED display, but I didn’t find it a deal-breaker by any means; especially considering that it’s such a nice display. Plus, despite being a performance-centric smartphone, the K50i’s primary camera can click decent photos. So I would not hesitate to recommend it to anyone looking for a reliable smartphone for everyday use.

Despite being an excellent gaming smartphone, the Redmi K50i, or say the Poco X4 GT, is yet to be released in Nepal. Xiaomi recently launched the 12 Lite in Nepal as the country’s $300 import ban nears its end.  As a result, the company might also be planning to launch the Redmi K50i here (we hope so).  When Xiaomi brings it to Nepal, we hope the price remains as competitive as the Indian market.