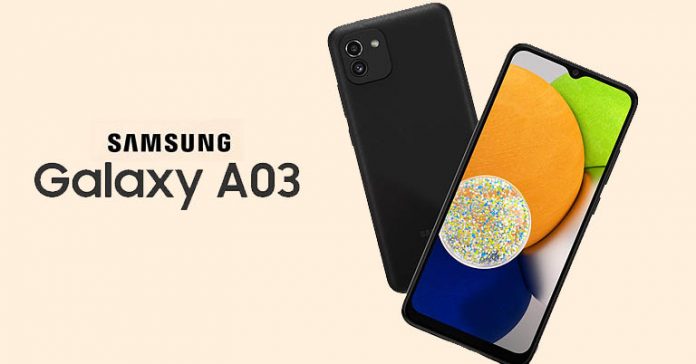 Following the release of the Galaxy A03 Core a few weeks earlier, Samsung has now announced the standard Galaxy A03. It brings a healthy upgrade over its predecessor—the Galaxy A02. So, let’s get into the specs, features, expected price, and availability of the Samsung Galaxy A03 in Nepal.

To begin with, contrary to the 5″ display on the A02, the Galaxy A03 flaunts a bigger 6.5” HD+ Infinity-V screen. As expected from a budget phone, it’s a standard 60Hz screen. It features a matte finish on the back and has a camera module reminiscent of the vanilla iPhone 12.

Powering the device is an unknown octa-core processor coupled with 3GB or 4GB RAM. The former is available with a sole 32GB storage while you can choose 64GB or 128GB storage configuration with the latter.

As for the optics, it features a 48MP primary camera—an upgrade from the 13MP lens on its predecessor. It is followed by a 2MP depth lens. On the front, there is a 5MP sensor for selfies and video calls.

Moving on, the Samsung Galaxy A03 features Dolby Atmos audio. As for color options, it is available in Black, Blue, and Red. Similarly, the phone is fueled by a 5000mAh battery.

Samsung Galaxy A03 Price in Nepal and Availability

For now, Samsung hasn’t revealed details regarding the price and availability of the Galaxy A03. We will update this article once they are official.