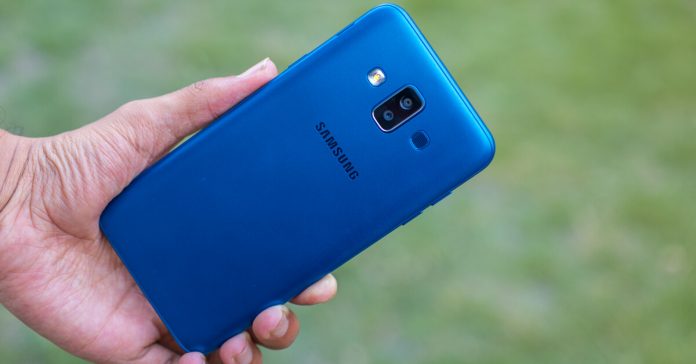 Nowadays, mid-range smartphones come with remarkable cameras, capable processor, and many other interesting features inside. Such promising features have obviously been thinning the gap between the mid-range and flagship smartphones and leaving people fewer choices to opt for a flagship device. And in the tangled mess of feature-packed mid-range smartphones, Samsung has made an attempt to stay in the competition with its recently launched Galaxy J7 Duo. Samsung has praised highly of the processor and cameras on the phone and promised to deliver impressive performance in the respective areas. With such features, can the J7 duo untangle itself from the crowded mess of mid-range handsets and supersede in the competition? Let’s find in this review.

we have seen quite awe-inspiring upgrades in the J7 series over the years. The last year’s J7 Max and J7 Pro smartphones had a metallic body and they felt quite premium on the hold and on the use. However, in the J7 Duo, Samsung downgraded from metallic unibody to the removable plastic back. 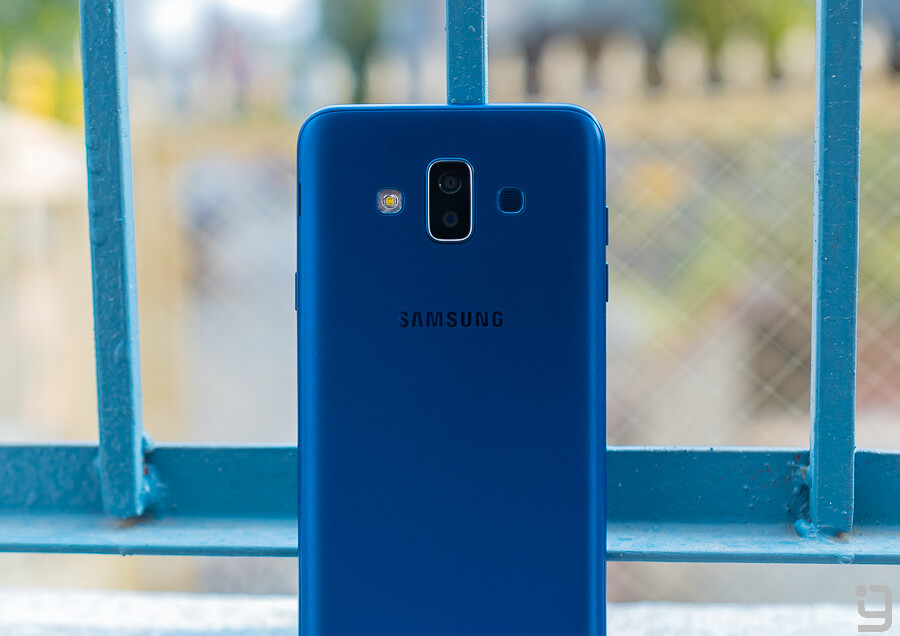 Also, in the smartphone market, we can also see a numerous handsets boasting narrow bezels and the display with an 18:9 aspect ratio. Well, the Galaxy J7 Duo is certainly not one of them. The smartphone comes with generous bezels on the top and the bottom and a display befitted between the bezels in a conventional 16:9 aspect ratio. So when I looked at the design on the J7 Duo, I find it really unconvincing of Samsung to provide such outdated design in its popular smartphone series.

In terms of display, the J7 Duo comes with a 5.5-inch Super AMOLED panel up front. However, the resolution is only HD. Since almost all the smartphones at the similar price are opting for a Full-HD display, the presence of merely an HD display on the device got me disheartened when I first looked into the specs. However, on the use, I did not find the lack of sharpness on the phone. With the Super AMOLED panel, the display looked vivid with darker blacks, brighter whites and with the impressive color reproduction. And I was pretty satisfied with the display on the J7 Duo during the course of the review period. 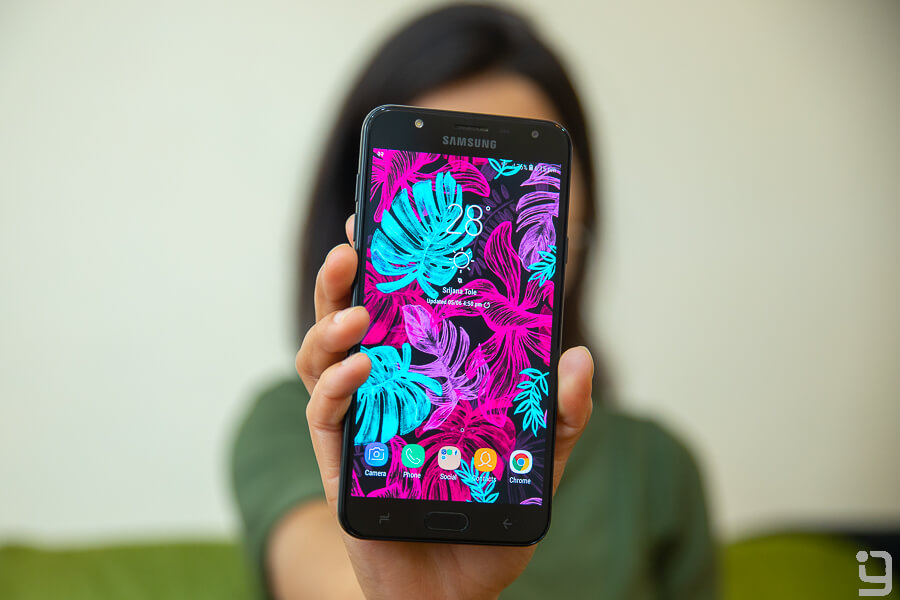 Furthermore, the smartphone also comes with a decent amount of brightness. I didn’t find any trouble on viewing and reading the content on the screen even in the bright daylight But it was really sad to see the lack of Ambient light sensor on the smartphone. I find it really annoying to adjust the brightness every now and then. Come on Samsung, at least, be generous on providing the necessary sensors.

Samsung had been quite obsessed with the Exynos 7870 chipset in the past. And almost all the previous version of the J7 smartphones were provided with the same chipset. But things have changed in the J7 Duo. Samsung has provided a capable Exynos 7885 chipset in the handset, which was previously provided only in the premium mid-range smartphones like the Galaxy A8 & A8 Plus. However, the cores in the J7 Duo are under-clocked as compared to the A8 smartphones. Underclocking has made the processor power efficient without a compromise in the performance.

Since the Samsung has shown high hopes regarding the Exynos 7885 chipset, we tried to unveil the features and to find its true potential. Fabricated with the 14nm architecture, the chipset possesses all the latest features. And counting on its potential, the performance of the chipset lies somewhere between the Snapdragon 630 and 636 chipsets. When the benchmark scores of the J7 Duo was compared with the Xiaomi Redmi Note 5 AI, the J7 Duo was not far behind the Note 5 AI.

Not just in benchmarks, the Exynos 7885 is also a capable performer in the real world. It does the tasks assigned to it quite smoothly and gracefully. Graphics-intensive games like PUBG, Dead Trigger 2, and Asphalt 8 were playable with a remarkable fluidity. Multitasking was also a delightful experience on the phone. All thanks to its ample 4GB of RAM. But considering the memory provided, the J7 Duo is quite low on storage as compared to the competition. It merely has 32GB of onboard storage. Nonetheless, the storage can be expanded up to 256GB and a dedicated SD card slot has been provided for the purpose.

But among all, I find myself using the S health app the most. The app is really handy for the users, who are conscious about the health. This health app basically focuses on tracking the wellness of the users by estimating the calorie intake, water intake, calorie burned, etc. on any given day.

Samsung has always been a remarkable performer in the photography department. And the tradition continued in the J7 Duo. It is the first Samsung smartphone in Nepal with a dual camera setup at the back. The camera pair at the back comprises the 13MP and 5MP camera, both of which are gifted with a wide f/1.9 aperture. The rear camera on the J7 Duo packs in abundant details in the images with decent color accuracy. The shutter speed on the device is also really snappy so I did not find any issues regarding the shutter lags. Also, the smartphone is quite deliberate on capturing images with high dynamic ranges.

Since there is a dual camera setup at the back, the first thing the setup cues is the portrait shots. The portrait images can be taken from the phone by selecting the Live Focus option. When I tested Live Focus feature, I was impressed by the way it performed. The setup blends in the subject details and depth information so sophisticatedly to provide impressive Bokeh effect. I found edge detection issues only on rare occasions. And such issues was not much of a problem since Samsung has provided the feature to readjust focus area and blur intensity in the portrait images even after taking the shots.

Up front, there is an 8MP camera for video calling and for the selfies. The selfie shooter does not possess the beauty mode but images seem beautified with enriched skin tones and smoothened facial skin. Despite the beautification, the sharpness remains intact, so the images remain pleasing most of the times. Despite the presence of a single camera, the selfie shooter also captures portrait selfies. The Bokeh selfies look really great, but since the feature is a result of the software tweaks, the edge detection is not entirely accurate. After taking numerous portrait selfies, I found a greater accuracy in the close-up selfies with few faces on it.

Check out all the high-resolution camera samples here.

The fuel the processes inside the phone, the J7 Duo is provided with a 3000mAh battery. With the HD Super AMOLED display and a power-efficient processor, I had a lot of expectation regarding the battery backup on the phone. But the battery did not back me the way I expected. With a Screen-on-Time of 4.5 hours and backup for less than a day on the normal usage, the battery falls on the average standard. It is implausible of Samsung to downgrade the battery size of 3600mAh on J7 Pro and 3300mAh on the J7 2016 to 3000mAh on the J7 Duo. But smaller battery also has an advantage. With the smaller battery capacity, a smartphone requires relatively less time to charge the battery. In case of J7 Duo, it takes around 2 hours to charge the device from 0 to 100% with the stock charger of 5V and 2A. Since the smartphone comes with a removable battery, users can buy an extra battery and swap them in need if they are impatient to charge their device continuously for 2 hours.

To sum it up, the J7 Duo is surely not an all-rounder phone and we cannot expect it to please every kind of users. The outdated design, HD resolution, and smaller battery may not be the justifying features in the price point. However, the smartphone packs in a capable processor and impressive cameras, which is really praise-worthy. These days, due to the users’ engagement in the graphics intensive games and indulgence in the social media, they are often found seeking smartphones with a good processor and capable cameras. And we believe, J7 Duo can easily fall in the choice of such users.