In the recent days, the rise of the Chinese smartphones has quite challenged the Samsung in term of sales. The Chinese brand with their ever-growing affinity to provide capable hardware in the budget handsets and Samsung’s reluctance to refresh the design somewhat backfired Samsung. So to regain its lead, Samsung started providing a refreshed design in its latest smartphones and the Galaxy J8 is one of such lucky handsets. But how does this gorgeous looking smartphone fares in the real-life usage? Let’s find out in this Samsung Galaxy J8 review.

The Samsung Galaxy J8 looks good despite its plastic back. There is a metallic frame and the metallic coating on the back that makes it appear premium. Even while holding and during use, the handset gives the impression of a metallic build. The phone also has curvy edges on the sides, which adds comfort in usage and offers a firm grip. The phone never slipped from my hands during my usage in the entire review period. What’s unique here is the location of the speaker which is located in a weird place on the right. The audio quality from the speaker is average and it’s not very loud either. There’s a fingerprint sensor on the back which is a little bit slow to my liking.

On the front, you get a huge 6-inch display. It’s surrounded by narrow bezels on the top and bottom, but there’s no curved glass on the sides.

Samsung likes to call it “Infinity Display” since it comes with an 18.5:9 aspect ratio, but I don’t get this whole Infinity Display concept. I mean, you get the Infinity Display on Galaxy Note 9 and the S9 as well. And you cannot compare the J8’s display to those at all…Maybe Samsung should call the displays on its mid-range phones something else. Like with every Samsung phones, you get a Super AMOLED panel that has good color reproduction, deeper blacks, and brighter whites. So, I didn’t have any issues related to color accuracy and vibrancy.

However, I was disappointed to find out the resolution to be only HD+. Last year’s J7 Max, J7 Prime, and J7 pro featured Full HD display, so I can’t understand why Samsung is including an HD display in 2018.

Since Samsung uses quality panels, I had no issues whatsoever, while watching videos, playing games and surfing the web. To my surprise, I did not notice any pixelation in the display or any lack in sharpness. However, FullHD panel would have served well especially considering the price tag.

The smartphone offers good brightness levels. I had no problems while viewing the contents even on a bright sunny day. Turning the outdoor mode on amplifies the display illumination to a maximum value so I could easily view the display even in a flooded light situation. 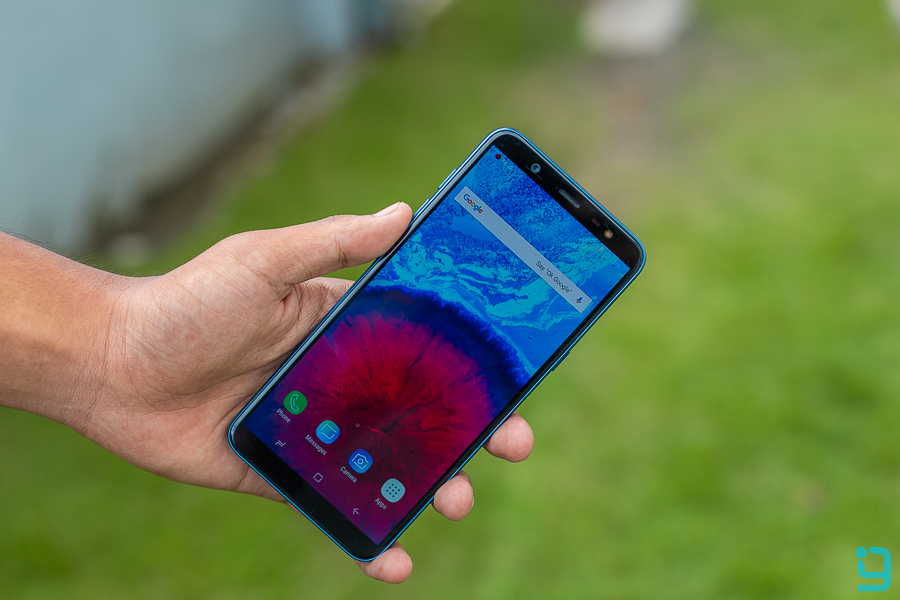 Software-wise, the Galaxy J8 runs on Android Oreo 8.0 out of the box.  Like always Samsung’s own Experience UI comes with tons of bloatware. I found most of the bloatware flimsy so uninstalling or disabling them was the first thing I did when I got the review unit.

The inclusion of game launcher, Dual messenger, Blue-light filter, Multi-window feature, Ultra Power Saving and Ultra Data Mode are some other welcome additions in the UI. So, except that cluttered bloatware, I was fairly impressed with the Samsung Experience UI.

I also noticed that all the games installed on the phones stores in the Game launcher Folder. It is an interesting feature as the user can manually make a gaming profile, which gives them an option to mute the notification while playing. In the game launcher, the user will also have the option to play the games by setting the performance to normal or to play the games with the power saving option. And the great thing is that it applies to playing every game inside that folder. Furthermore, while running the games, two special icons add to the navigation bar. Between the two, one locks the gaming screen pausing the game whereas pressing another icon unveils some more features like taking a screenshot of the gaming screen or making a gaming video. I found this feature pretty handy as it allowed me to share the gaming experience with my friends and my siblings.

Samsung always had the best camera on a midrange smartphone. This time, Samsung has included a dual camera setup. The camera pair comprises of 16MP primary lens backed by the 5MP depth sensor. The sole purpose of the two cameras on the back is to capture portrait images. So, I tested the portrait images first. And I was thoroughly impressed by its capability. It has an excellent edge detection, due to which, the Bokeh effect looks more natural than what you’d get from software tweaks. And like always, Samsung has also added the feature to adjust the amount of blur and focus area after taking the shots.

In addition, this time, Samsung has included the feature to change the blurred backdrop from normal to Crystal, Pixel, Time Slice and Crumbled options. I found this feature really handy as it adds new taste in the mainstream Bokeh effect. Furthermore, there is also the Portrait Dolly feature, which basically creates the 3 seconds videos from the portrait images where the subject is zoomed in or zoomed out with the segregated background.

Talking about normal shots, the device captures images with substantial details with a good amount of color reproduction. Even on the HDR side, the smartphone does a fine job. It captures HDR shots preserving the details of the highlights and shadows quite well and I have no complaints here. However, low light shots were not that impressive. They invite quite a lot of noise and grains, so, the images do not look so good. But when compared side by side with a more expensive Nova 3i, the J8 does a better job in low light shots.

The 16MP selfie shooter on ample light come out great with good amount of details and color accuracy. The beauty mode also works quite well by removing the facial blemishes and acne.

Selfie: Normal Vs Beauty
1 of 2

But its Selfie Focus is the most exciting feature. With this feature, it captures the portrait selfies with blurred backgrounds. Although it’s not as good as the rear camera since there’s only one camera at the front, and the background blurring is done with software effects, but it looks fine when captured under ample lighting. As for videos, the J8 captures Full HD videos at 30fps from both the front and the rear cameras. Videos from the phone look okay at best. Since the phone lacks Image Stabilization, captured videos look kinda shaky. Also, the jittery autofocusing is also really unpleasant.

The J8 is powered by Snapdragon 450 chipset backed by 4GB of RAM. The presence of the mediocre chipset bugged me since Day 1. The chipset is usually found in budget phones these days, and Samsung’s decision to opt for this chipset in a midrange phone is not a good choice at all.

However, since the chipset only has to power an HD+ display, the performance of the phone was not that bad. Using multiple apps and multitasking ran smoothly and there were no lags while switching between them. Even while playing low end to mid end games, there were no any stutters and drop in frame rates. I played Asphalt 9, Dead Trigger 2, and Shadow Gun legends, all of which, ran with good frame rates at medium settings. But at high settings, you will notice every now and then. And, when you compare its performance with say the Redmi Note 5 AI or the Oppo F7, its evident that the J8 falls short by a good margin.

On the storage side, the J8 packs an ample 64GB inside. Also, you can expand the storage up to 256 GB with a dedicated microSD card slot as well.

A generous 3500mAh battery coupled with low power consuming hardware and internals, the J8 easily provided me more than a day under normal usage. So during the review period, I was thoroughly impressed by the battery performance. And since there are various power saving options, I could even prolong the backup. So, with the J8 as my daily driver, I never had to bother about charging the handset very often. Despite that impressive backup, charging was a pain in the neck. The stock charger of the smartphone is rated 5Volt, 1.5Amp, which takes slightly over three hours to get the battery fully charged. But with the 5Volt, 2Aamp charger, it took just around 2 hours and 15 minutes to refill the battery.

To sum it up, The Galaxy J8 has an impressive camera – both front and back. They’re comparable to those of pricier Huawei Nova 3i and Oppo F9. The battery is good enough and will easily last you for a day. The build quality is sturdy despite a plastic back while the AMOLED display offers great colors and brightness levels.

However, the choice to put in a Snapdragon 450 is just not right. If they’d gone with the Snapdragon 636, or the Exynos 7885, it would’ve been much better. Also, I think a 1080p display is mandatory for the price of the phone.

With all that it packs, I think the phone is mainly focused for general users who want something of everything. As it doesn’t have anything, in particular, to make it stand out, it is just for the average users, and not for someone who wants power performance. So, that was the Samsung Galaxy J8 review. Would you buy it or skip it? Let us know in the comments down below.