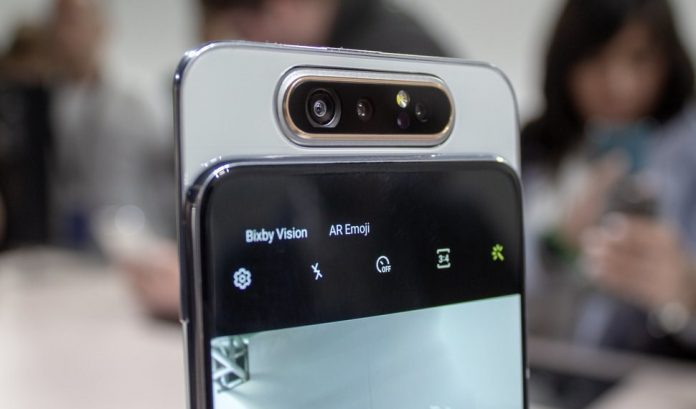 By now, it is no news that Samsung is revamping its mid-range and budget segment. While the budget segment capped out at the Galaxy M10, M20, and M30, the A-series is seeing quite a few phones. Looks like they’re seeking to fully complete the A-series. Because, this lineup has the Galaxy A10, A20, A30, A40, A50, A70, and Samsung Galaxy A80. The only ones missing are the A60 and the A90, which, may or may not come out. But that’s a lot of phones!

The Galaxy A80 is the latest addition to the A-series. And this phone takes the Infinity Display to a whole new level! Well, not technically. It is a pop-up camera after all. But the pop-up camera is also slightly modified to use it as the selfie camera as well. So, basically, you have a rotating camera module.

The Samsung Galaxy A80 features a triple camera setup. That, however, is not new. But what’s new here, is when you trigger the selfie camera, the rear camera module slides up, and the sensors rotate frontward. That’s a double sliding mechanism in action. Its triple camera setup comprises of a 48 MP primary camera with f/2.0 aperture, and an 8 MP ultrawide sensor. However, contrary to our expectations, the 3rd lens is a 3D TOF (Time of Flight Sensor) for better portrait shots and Augmented Reality applications. While augmented reality application is not fully fledged yet, it can help take portrait videos as well. Speaking of videos, this phone can do some fancy stuff like take 4K videos as well.

Apart from the camera, the phone packs a massive 6.7″ display with Full HD+ resolution. The body is a glass construction with an aluminum frame in between. That is the making of most premium looking handsets. Under the glass, it runs on the new Snapdragon 730 chipset based on 8 nm fabrication process. Combined with 8 GB RAM, that should mean plenty of power at your hands! There’s also 128 GB storage on-board, a decent 3700 mAh battery, and 25-Watt Fast Charging. For now, the fast charging here is better than what we get in the flagships, Galaxy S10 and Galaxy 10+.

The Samsung Galaxy A80 is priced very close to the semi-flagship, Samsung Galaxy S10e. It’s up to you to decide which one’s a better value for money. But what is more concerning than that, is having two motorized parts – which is not really convincing on the durability front. Whether it will live up to the hype, time will tell. The phone will be officially available for purchase starting May 29.