Samsung has already launched quite a few mid-range phones in 2022. While some of them, such as the Galaxy F23, A33 and A53, have been overall impressive devices, there are offerings that have disappointed us significantly, like the Galaxy A23. Anyways, among the recent releases, I’ve been using the Galaxy M33 as my daily driver for almost a month now. And, in this review, I’ll be sharing all my experiences with the Samsung Galaxy M33 5G.

Okay, let’s start this review with something that is easily perceivable about any phone—the overall design and build quality. And here, it’s pretty much what we’re used to seeing on a mid-range Samsung phone: an all-plastic build with a reflective finish on the back. So yeah, it certainly lags behind in terms of a premium feel compared to a glass-back phone. And, because of the reflective finish, the back panel readily picks up fingerprints and smudges. This can easily be avoided with a case, but you will surely be disappointed to know that Samsung doesn’t include one inside the box this time.

Personally, I do prefer using a phone without the case. And fortunately enough, M33 has held up to my rigorous usage pattern, as there were no scratches on the back or frames to date. But, the company should not cheap out on providing such a basic TPU cover.

The M33 5G also misses out on IP certification, and the SIM tray lacks a rubber gasket protection as well. Therefore, one must have to be really cautious when taking it to shower and such.

In terms of hands-on feel, the Galaxy M33 has a definite heft to it—which is mostly thanks to the big 6000mAh battery inside. But honestly, it’s not uncomfortably heavy to hold—thanks to the excellent weight distribution and ergonomic design. However, that doesn’t mean it’s a slim and sleek device by any means. As for biometrics, there is a side-mounted fingerprint scanner which is quite accurate and reliable.

Moving on, Samsung’s offering lags behind in the display department as well since the phone ships with a 120Hz TFT screen. So, it’s pretty apparent and obvious that this display doesn’t deliver the best colors and contrast you would expect from a mid-range Samsung phone. Even the outdated teardrop notch is still present here! As a result, this is definitely where most of the criticisms surrounding the phone revolve—especially for a name like Samsung which has always been known for manufacturing the best smartphone displays.

In comparison, Xiaomi is readily offering a vibrant AMOLED screen on Note 11 Pro 5G, while Samsung’s stance against the AMOLED panel on its mid-range 5G device seems pretty dubious. Still and all, this TFT panel is of decent quality with a not-so-bad viewing angle. And, because this is a Full HD screen, I didn’t face any problem with the screen’s sharpness either. The phone also has Widevine L1 certification that lets you watch Full HD content on OTT platforms. 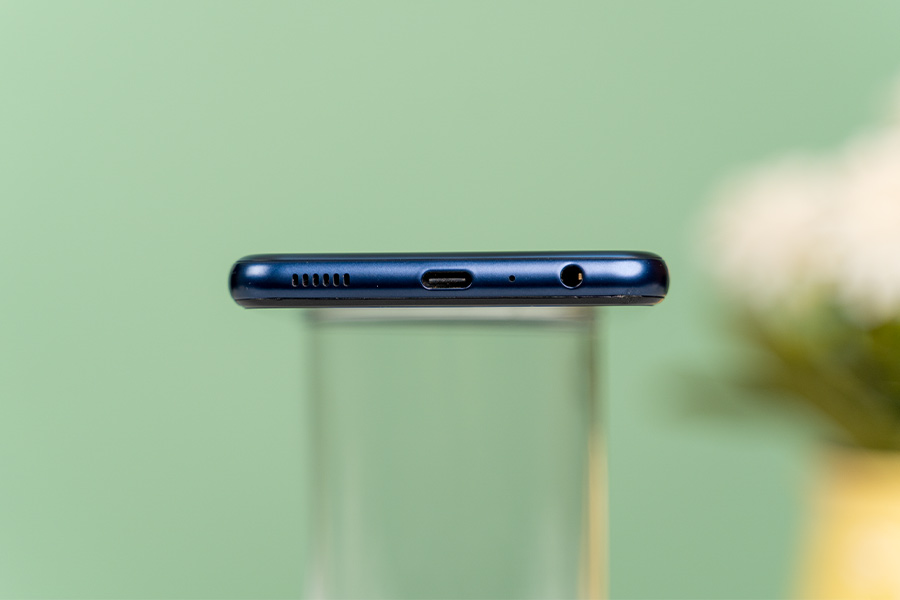 While we’re on the subject of content consumption, let’s also sum up its audio quality. And, like the display, M33’s audio quality leaves things to be desired as well. Here, Samsung has gone with a simple bottom-firing mono speaker which can get loud enough for binging movies and such. But it does not provide the same degree of immersive music experience as a stereo speaker setup.

Call quality, on the other hand, is perfectly fine. However, the sensitivity of its virtual proximity sensor is not so good. On a few occasions, I noticed that the screen doesn’t turn off when holding the phone close to the ear during a call.

Despite the relatively sub-par display and audio, M33 delivers pretty great results when it comes to performance. It is powered by the company’s in-house Exynos 1280 chipset which is on par with the Snapdragon 695 5G chipset that is making rounds on a lot of mid-rangers these days. 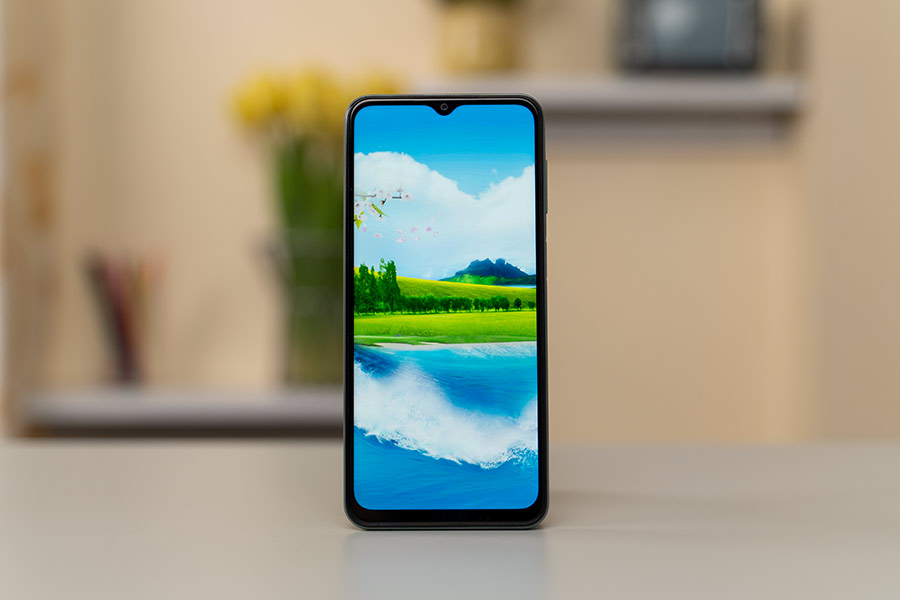 As a result, the phone can easily handle regular day-to-day tasks and I have no complaints with its memory management either. Likewise, with a 120Hz refresh rate on board, cruising through this display feels smooth and fast. It also enjoys a RAM expansion feature called RAM Plus up to 8GB, which bumps the phone’s memory to a whopping 16GB. Yet, it has very little bearing on the phone’s overall performance in practical usage.

The better news, though, is that the handset comes pre-installed with Android 12-based One UI 4.1 which puts the Galaxy M33 on solid ground. And, this custom skin is chock full of good stuff. Like, here you get Google’s Material You like dynamic color theming, object eraser in photos, and others. But, what’s even more commendable is that the company is promising up to 2 years of Android and 4 years of security patch updates. Having said that, there is still room for improvement in terms of proper software optimization, as I have encountered micro stutters and lags occasionally when scrolling through the UI or Twitter feeds.

Now, when it comes to gaming, PUBG Mobile maxes out at just HD graphics and a High Frame rate. But, even at Smooth and Balanced graphics, the frame rate doesn’t go beyond 30fps. Even Call of Duty couldn’t hit 60fps before, but with a recent update, it now renders a stable 60fps gameplay. 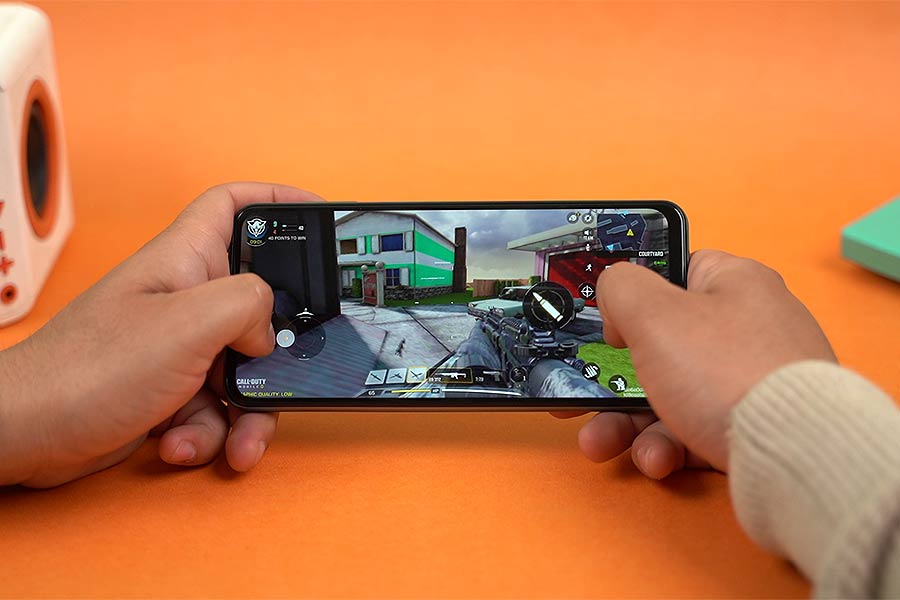 On the other hand, heavy games like Genshin Impact take a toll on the 1280 and the gameplay is stuttery even at the lowest possible setting. Nonetheless, higher fps games like Critical Ops and Oddmar are well playable at 120fps. During all my gaming sessions, I didn’t face any major heating issues, although the phone got slightly warm near the camera module on a few occasions.

Okay, let’s talk about cameras now. Here, the Galaxy M33 has a 50MP quad-camera array. Upfront, there’s an 8MP selfie shooter on the aforementioned water drop style notch. For this review, I compared the cameras on the Samsung Galaxy M33 against the Redmi Note 11 Pro 5G.

Under normal daylight scenarios, photos on the M33 have a relatively better dynamic range and HDR processing. To compare, Note 11 Pro’s shots are high in contrast—while also coming off with boosted whites at times.

M33’s ultrawide photos exhibit a notable color shift and have a greenish/bluish hue. Surprisingly, the images from the Note 11 Pro have a better dynamic range and colors this time around.

Edge detection in portrait photos is similar from both the phones. Likewise, M33’s photos are more consistent in terms of colors, with good background separation and skin tone. In comparison, Note 11 Pro backgrounds tend to be a bit blown out sometimes.

Similarly, selfies from the M33 have superior contrast and dynamic range, whilst the Note 11 Pro’s photos have incredibly inconsistent skin tone.

Moreover, neither of the phones enjoys an OIS camera setup, so the normal nighttime images are not that detailed. However, the shots from the Note 11 Pro are sharper compared to the smudgy photos from the M33.

Turning night mode on, the M33 compensates for its performance with better HDR processing and dynamic range. 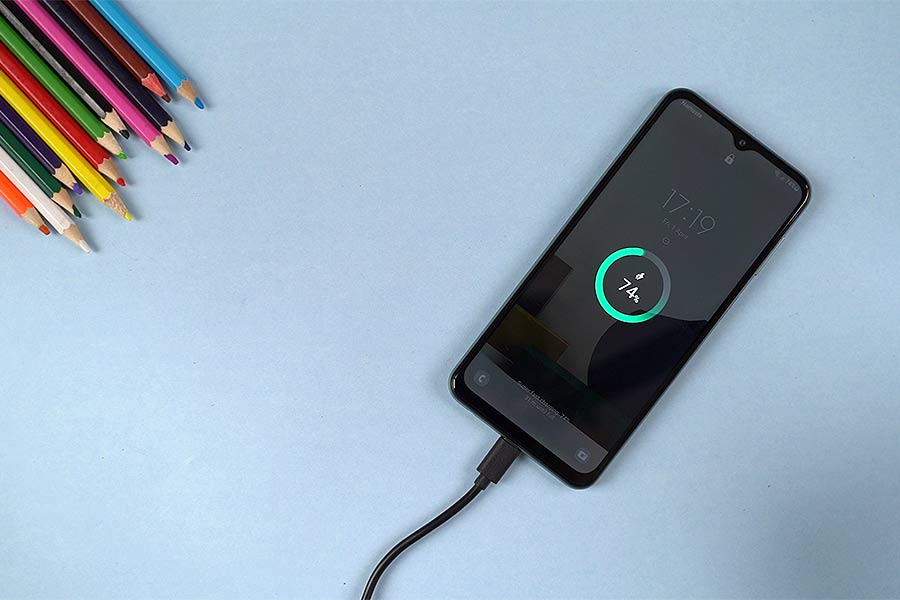 Moving on, something that’s incredible about this phone is undoubtedly the battery life. As I mentioned earlier, Samsung has fitted in a big 6000mAh battery here that can easily provide 8-9 hours of screen on time. And if you’re someone who doesn’t really do much with their phone, the M33 will easily last you 2 days.

However, Samsung has cut corners by not including a compatible charger in the box. And that’s kind of frustrating if you ask me. So, you have to separately purchase a 25W charger that takes around 1 hour and 40 min to fully juice up the cell.

Okay, time to wrap up this review. So, what do I think of this smartphone? In my opinion, it has an overall good set of cameras, an out-of-the-box Android 12 experience that too with a good number of pledged software updates and good battery life.

While that is mostly positive about the phone, there are a few major things that limit the Galaxy M33 5G to be an all-arounder device. Like the TFT screen, an all-plastic build, mono speaker, and no IP certification. For a slightly higher price, the Redmi Note 11 Pro 5G and Samsung’s own Galaxy A52 4G offer a really good AMOLED screen, stereo speaker setup, and a more premium design.