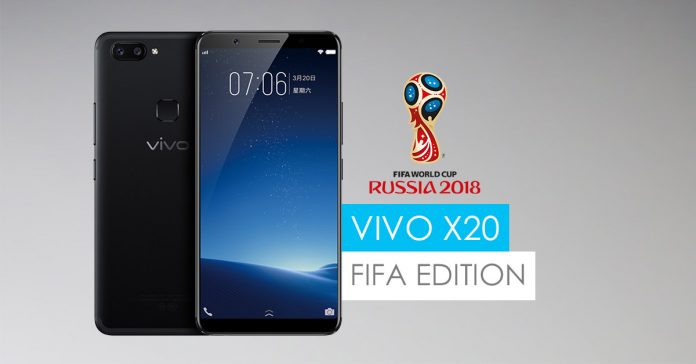 Vivo has partnered with FIFA for the next six years or so. This makes them one of the official smartphone partner for the World Cup in Russia 2018 and Qatar 2022. And with that, a Worldcup edition Vivo smartphone was a definite.

Vivo X20 was the smartphone the Chinese manufacturer choose to showcase their partnership with the World Cup organizers. This makes the V20 the official smartphone for World Cup 2018. All of the officials of the tournament will also receive one Vivo X20 each.

The smartphone was introduced a while back in Russia. Specs include a Snapdragon 660 SoC paired with 4GB of RAM and 64GB of internal storage. The onboard storage can be further expanded up to 256GB via SDcard. That, however, occupies the SIM2 slot. Adopting an 18:9 aspect ratio and with the shrunk bezels, Vivo X20 chose to follow the trend and to be one of the smartphones with near bezel-less display. The tall 6.01-inch FullView display on the device features Full HD+ resolution unlike the Vivo V7 and Vivo V7+, which possessed a mere HD+ display. The phone also sports a dual camera setup on the back. The device comes with Android Nougat out of the box with FunTouch OS 3.2 on the top. For the security, there is a fingerprint sensor on the back. The device also possesses other sensors like accelerometer, Gyro sensor, proximity and compass sensors. Vivo X20, the FIFA World Cup edition smartphone is backed by a 3250mAh battery.

The Worldcup edition smartphone will be no different from the regular one, except for the aesthetic of course. The special edition variant will feature a logo of the tournament on the lower back of the phone.

FIFA world cup will start on Thursday, June 14 and end on Sunday, July 15, 2018, with 32 teams fighting for the cup. Tell us what you think about a smartphone specially designed in the spirit of the FIFA world cup.