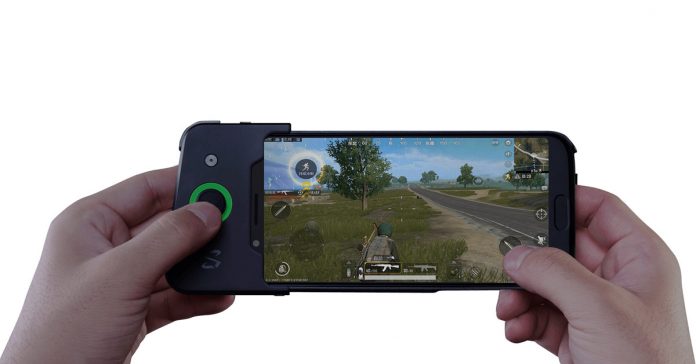 When observing and analyzing the current trend of the smartphone in the market, it can be seen that the majority of the brands are racing to provide the best product for photography. Undoubtedly the latest examples would be the Huawei P20 Pro, Samsung Galaxy S9 plus, and the iPhone X. With the passage of time and the progression of hardware and software, the smartphone these days also have been a great device to perform multitasking and using intensive graphics applications. However, the smartphone makers have been quite reluctant to bring the handset entirely dedicated to gaming. When Razer launched the Razer Phone, it broke all such tradition. Now, following the footsteps of the Razer, Xiaomi launched the Xiaomi Black Sharks Gaming smartphone in China.

Beginning with the dimension, the Xiaomi Black shark gaming phone measures 161.6 x 75.4 x 9.25mm. And the smartphone audaciously weighs 190 grams. When the smartphone manufacturers are focusing on bringing slim and light handsets, the weight and thickness might be unpleasing. But since it is a gaming smartphone, the device construction definitely follows a different formula.

When the device is looked at the front, nothing seems different when compared with the regular smartphone. But when the handset is turned over, a new gaming energy awakens. The design like a sports car at the back generates awe and differs the Black Shark from the crowd. The backside of the phone also incorporates the horizontally aligned pair of cameras and an ‘S’ logo at an absolute middle. 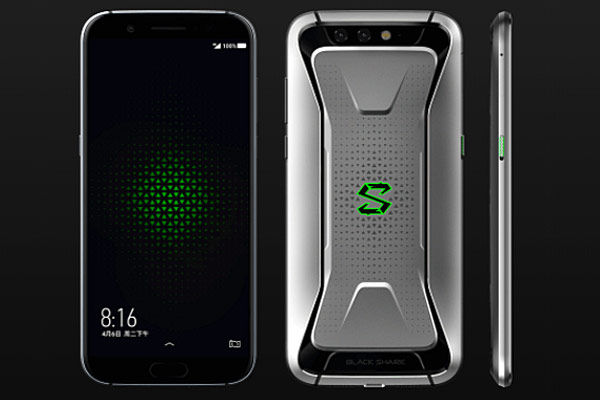 The true gaming sensation awakens when the detachable gamepad controller is embedded to the device.  The controller looks like a typical Joystick in a small form factor. There is also a dedicated Shark Key at the left side of the phone, which allows the users to access the impressive gaming zone.

At the time when there is an immense craze for the smartphones that boasts the 18:9 aspect ratio, Xiaomi has not taken a risk. The smartphone valiantly boasts Full HD+ display with the trendy 18:9 aspect ratio. The display on this gaming device also embraces the DCI-P3 color gamut. And the most important of all, MEMC intelligent motion compensation technology has been injected into the phone, which ensures smooth video quality while playing games.

There is nothing much to talk about the bezels since a generous amount of bezels still present on the phone. But since it is a gaming phone, that’s understandable. The presence of the front mounted fingerprint sensor, which lies meticulously on the home button differs the handset from the typical Xiaomi smartphones.

This gaming smartphone enjoys the Qualcomm’s latest flagship, the Snapdragon 845 chipset. In terms of memory, the Black Shark gaming smartphone comes in two variants. The light variant possesses 6GB RAM accompanied by 64GB of internal memory whereas the higher-end variant has the delights of 8GB RAM and 128GB of onboard storage. And to cheer and excite the crowd, the CEO of Black Shark mentioned that the smartphone scored a whopping 279,464 on AnTuTu. So we can expect that this gaming will definitely not shred a single drop of sweat even while playing the graphics-intensive games.

In the gaming devices, heating issues often come to nudge the users while playing games. And to address the issue and to control the internal temperature, this gaming device features a multi-layer cooling system that includes high thermal conductivity copper alloy substrate, Nano-composite graphite, heat pipe and liquid cooling that can bring down the temperature of the device by 8 degrees by improving the CPU cooling efficiency by 20 times. 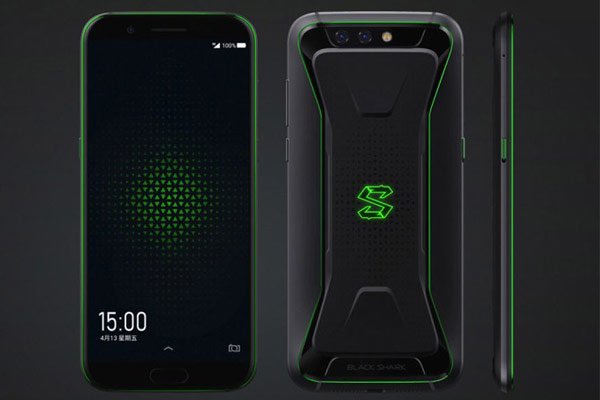 Since the gaming devices devour a huge amount of power, it is uncool to own one of such kind of device, which needs charging in quick succession. So to evade such problems, the smartphone maker has included a remarkable 4000mAh battery. This gigantic battery promises to deliver the power up to 5 hours even if the “King of Glory” is played continuously. In addition to its capability to fuel a significant amount of power during the gaming sessions, the phone also supports Quick Charge 3.0. With the ability of the smartphone to draw 18W power, charging process would not be a hassle.

Xiaomi does not forget to inject its handsets with its home-baked MIUI. However, in the Xiaomi Black Shark Gaming Smartphone, the smartphone maker has sprinkled the JOY UI. There is nothing much to get excited about the new UI as it is a customized Android Oreo ROM that includes the core features of the MIUI. The tweaks on the MIUI are entirely focused to improve the gaming experience in the handset.

The users’ choice definitely goes to the smartphone, which is great in every department. So keeping that on the mind, Xiaomi has furnished the smartphone with the capable components even in the camera department. For an impressive photography experience, it includes a dual camera setup at the back. The rear camera pair at the back incorporates a primary 12MP camera backed by the secondary camera of 20MP. The primary rear camera has an aperture of f/1.75 and includes the sensor with the pixel size of 1.25 micron. The secondary camera also shares the same size of the aperture (f/1.75) with the pixel size of 1.0 micron. Equipped with the 6P dual camera setup at the back, the smartphone looks capable of taking some nifty shots with ambient details and some awe-inspiring portraits.

Up front, there is a single camera of 20MP dedicated for the selfies. The front camera enjoys the f/2.2 aperture and 5P lens. The selfie shooter also offers features like intelligent beauty mode and 4K video recording at 30fps. Both the cameras on the device are powered by an independent image processor by Pixelworks.

The Black Shark gaming smartphone imitates a pure gaming device when its Bluetooth-enabled Shark GamePad to the top portion of the phone. The shark GamePad is packed with a Joystick,  a trigger, and a 340mAh battery. With this battery, the controller runs continuously up to 30 hours. Since it gets paired via Bluetooth, it can also be used to play games on every other smartphone that support Bluetooth 4.0 and Android 4.4 and above. Furthermore, this gaming handset is favored with Hi-Fi audio, Biso stereo speakers with Dual smart PA for amplified audio output. With this audio setup, the gaming sound enthralls the users with an immersive gaming experience.

In terms of pricing, the Xiaomi Black Shark smartphone is tagged with the price of 2,999 Yuan, which equals $477 for the 6GB + 64GB variant. The premium or the higher-end variant with 8GB + 128GB is priced at 3,499 Yuan, which equals $557. And the Joystick like Shark GamePad controller can be availed at 179 Yuan ($29). The smartphone is available in two color variants: Night Black and sky Gray.

At the pre-mentioned prices, the smartphone is available for pre-booking in China. Xiaomi is also offering a free Shark GamePad for the first 50,000 pre-bookers. A smartphone enriched with so much of impressive features is obviously tempting to the most of the gamers. However, the global availability of the smartphone has not been announced yet. So the smartphone probably will not launch in Nepal. But as of China, the smartphone maker has promised to make the device available from April 20.

When Xiaomi launched the MI Mix as the concept phone, it was hailed all over in the tech community. After the unveiling of the Xiaomi MI Mix, a new trend started in the smartphone world on bringing and developing the concept of smartphones with a bezel-less display. Alike this incidence, when the Razer launched its Razer gaming smartphone, the device maker garnered a substantial amount of applauds and encouragement. Now as the Xiaomi seconded this bold move, can we expect that a new trend to begin in the smartphone world regarding the gaming phones? Let us know in the comments down below.