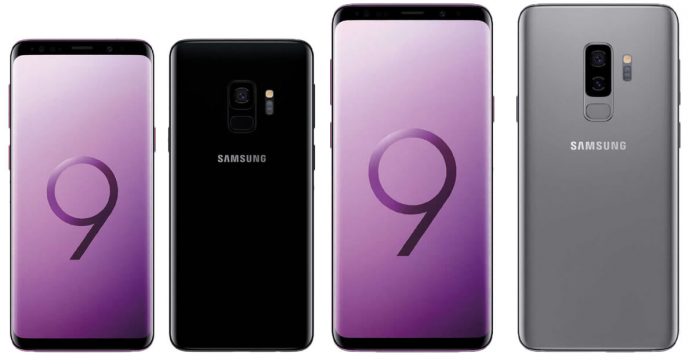 Mobile World Congress or the MWC 2018 kicked from February 25. And in this biggest show of the mobile technology, Samsung announced its new flagship handsets, Samsung Galaxy S9 and S9 Plus. Due to the frequent leaks, rumors, and speculations, the smartphone had created quite a buzz lately.

Lately, Samsung had been advertising these new flagship handsets to possess an awe-inspiring potential in the camera department. Shouting “Camera Reimagined” on several occasions, the smartphone giant had genuinely hyped the photography caliber of the Samsung Galaxy S9 and S9 plus. And to everyone’s surprise, the Korean giant introduced the unique dual-aperture cameras in the newbies. With this feature, users can change the aperture of the camera and adjust the amount of light while taking the shots.

Samsung has boasted that this feature is to provide flexibility to the cameras so that it can capture superior shots in every lighting condition. The presenters also mentioned that this feature helps to embrace enhanced visibility and sharpness in the images irrespective of the lighting condition. The 12MP camera on the Samsung Galaxy S9 has a dual aperture that can be switched from f/1.5 to f/2.4 aperture. The f/2.4 aperture can be used if there is adequate light and shallow depth of field is not required. Likewise, the wide aperture of f/1.5 can be employed to take shots during the low lights. 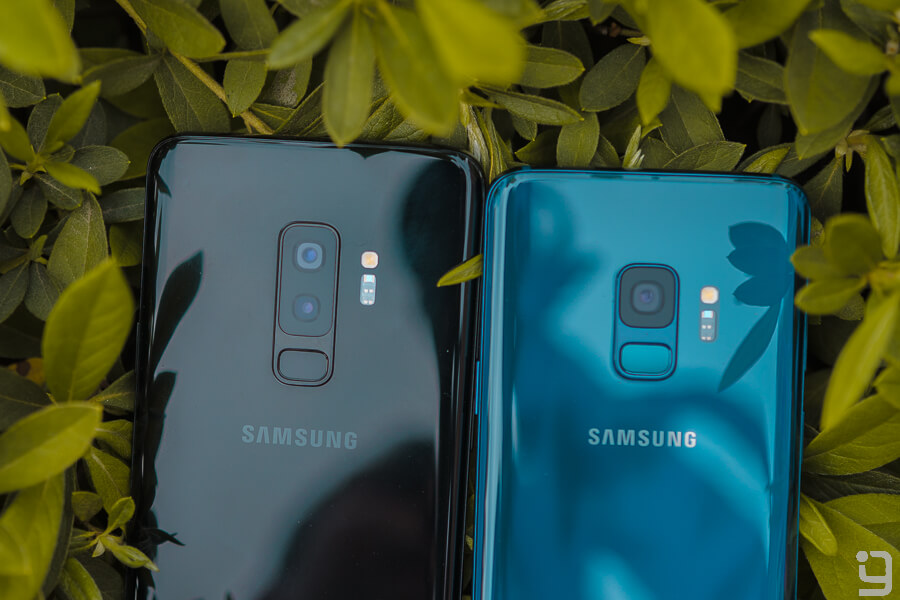 Unlike the last year’s Samsung Galaxy S8 and S8 plus, there is a slight difference between Galaxy S9 and S9+. Last year’s flagship handsets used single camera setup with same sensors and lens. However, in the case of Samsung Galaxy S9 and S9+, there is a slight discrimination amongst the siblings. The smaller device or the Galaxy S9 possesses a single 12MP camera with f/1.5 – f/2.4 aperture and OIS. But its bigger sibling inherits a dual camera setup on the back. The dual camera setup of 12MP on the plus variant inherits the combination of telephoto and wide-angle lens. With this setup, in addition to nifty portrait shots, the smartphone can capture images with 2x lossless optical zooming.

To add more, the newbies come with “Super speed Dual Pixel” technology. It combines the dual pixel technology that was introduced with the S7 series and adds dedicated processing and memory to enable multi-frame noise reduction using 12 separate images per photo you shoot. And there is a dedicated DRAM built into the sensor, due to which the handsets would be able to stitch all those images together quickly. And resulting in hardly any delay between pressing the shutter button and the picture showing up. With this technology, Samsung aspires to reduce to reduce the amount the noises and grains in the images when shot during the low light scenarios. 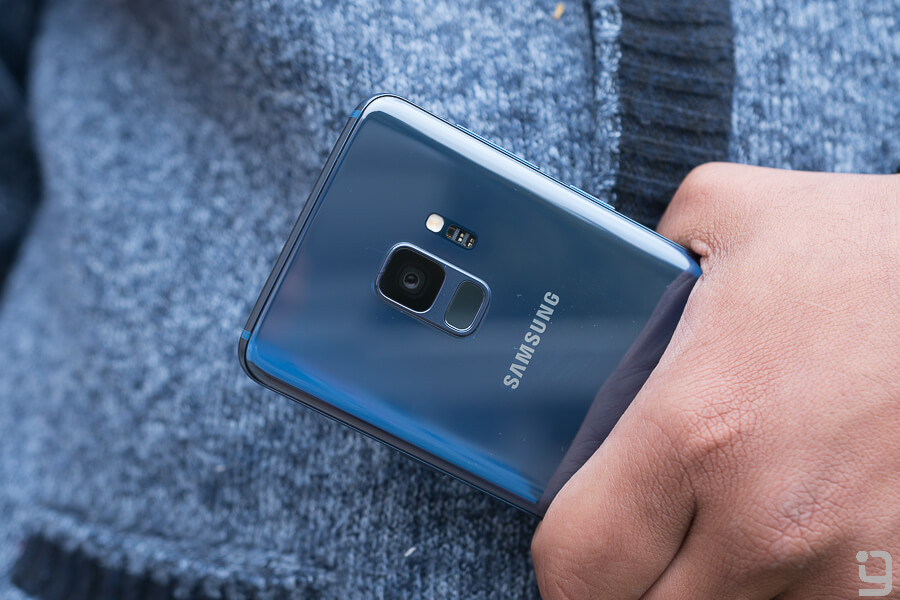 Samsung Galaxy S8 and S8 Plus were criticized for its awkward fingerprint placement throughout the year. Back then, those flagship handsets had the fingerprint sensor next to the camera, which often invited smudges on the camera. However, this time around Samsung has shifted the fingerprint scanner just below the camera. At this new position, the camera does not suffer from the unintentional smudge when trying to unlock the device. To add an extra layer of security to the Samsung Galaxy S9 and S9+, the Korean giant also provided “Intelligent Scan” feature to the handsets. Basically, the “Intelligent Scan” feature incorporates Iris Scanner, which combines with the face recognition feature to provide top-notch security.

According to the representatives of the Samsung, the iris scanner won’t work as effectively in bright light as it is in the dark. With the new system, these galaxy phones will try to sign you in with your eyes by default, but when that fails, it will use facial recognition.

Animoji feature in the iPhone X was a huge hit. Mapping the users’ faces and tracking the facial movements, the Animoji feature on the iPhone X was used to replicate the movement via funny characters. And probably impressed with this noteworthy feature, Samsung brought the similar feature known as “AR Emojis”. This feature maps the user’s face and builds a character who has almost similar face details like the user but in a cartooned form. The attributes of the user’s skin complexion and dress are also customizable. Furthermore, this feature allows the user to add spectacles and adjust hairstyle so that a character with a close resemblance to the user can be obtained.

Samsung first launched its AI assistant in the S8 and the S8 plus. With Google Assistant and Siri already the major player in the game, Samsung’s home-baked AI assistant received numerous criticisms. All the criticism were for the lack of smartness like the aforementioned duo. However, this time, Samsung has added a lot of features to the Bixby and the Bixby vision was improved greatly.

Now with the Bixby vision 2.0, users can translate the language in real time just by capturing the image in the Bixby Vision. Additionally, there is Makeup mode, which lets you try out make on your face virtually in the real time. If the makeup comes to your liking, you can also shop the makeup goodies right through your smartphone. However, this feature is limited to only a few countries.

The Samsung Galaxy S9 and S9 Plus also inherit the AKG tuned stereo speakers. With the new kind of speaker setup, S9 and S9+ have been Galaxy smartphone with loudest audio level. Presenters were quite proud to mention that with the Dolby Atmos powered speakers, this handset can produce cinematic sound to mobile devices. In the event, Samsung also boasted that this setup would provide an immersive sound in the 3D environment.

In terms of display, there are no such significant enhancements. Like the S8 and S8 plus duo, the newbies come in the same size of 5.8 inches and 6.2 inches respectively. However, the bezels on the device have been slightly shrunken, which results in slightly more screen-to-body ratio. Additionally, the brightness of the device has also been upsurged from 600 nits to 700 nits. Powering the device is Snapdragon 845 chipset, which will be available in the market of China and USA. For the Middle East, Europe and Africa, the device will come with Exynos 9810 chipset. With these new chipsets on the house, the handsets ensure 25% boost in general performance, 30% boost in graphics performance, 30% lower power consumption, and improved image processing over its predecessors. And these powerful yet power efficient 10nm chipsets are backed by 4GB of Ram on the S9, whereas the S9+ is gifted with a whopping 6GB. The devices come with 64GB of onboard storage and there are additional 128GB and 256GB variants who crave for higher internal memory. Nevertheless, the smartphone has a Micro SD card if the internal storage turned out to be insufficient. However, it takes up the SIM2 slot for the purpose.

Other benefits of buying the Samsung S9 in Nepal are 1-year breakage insurance from Shikhar Insurance and 1GB data per week for 12 weeks from Ncell.