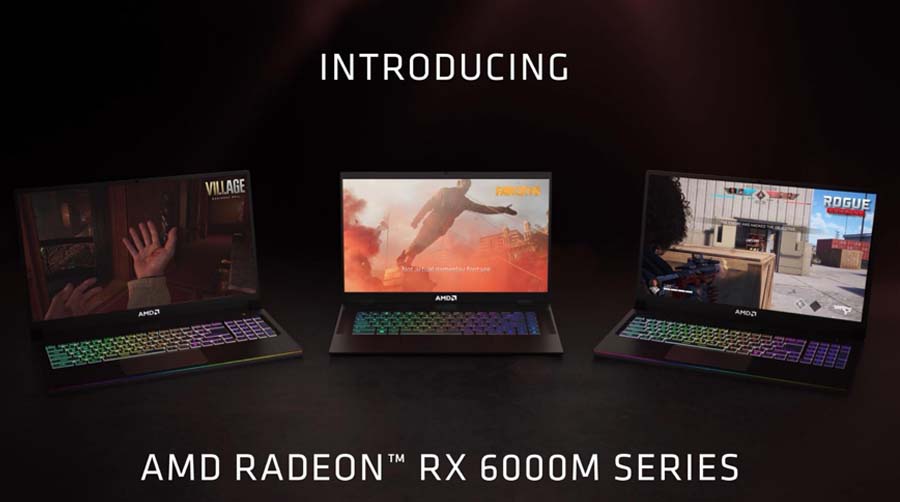 The architecture is scalable, meaning you one use it for lower power models, higher performance machines, and even power-constrained gaming laptops. Thus, after all these years, AMD has its best chance to win the laptop GPU market with the new Radeon RX 6000M GPUs.

Also, the SmartShift feature that we saw in last year’s Dell G5 15 SE will be available to other manufacturers as well. This feature dynamically shifts the power between the GPU and CPU. What it means is that the system can pour more power on the CPU than on GPU during CPU-bound tasks and vice versa.

Here, the Radeon RX 6800M is the flagship of the bunch. Despite the name, it is based on Navi 22 GPU, which is on the Radeon RX 6700 XT. Both feature 40 compute units and an equal number of ray accelerators. Similarly, they have 12GB of GDDR6 VRAM and 96MB Infinity Cache.

AMD says that we can expect up to 100fps while playing “popular games” on 1440p. On the other hand, RX 6600M is for “epic 1080p gaming”. However, given the wide range of configurable TGP, these claims may not always hold true.

AMD also announced its latest design framework that it calls “AMD Advantage”. While these new AMD GPUs boast a ton of features, it is always up to laptop manufacturers whether to leverage them or not. This is where the AMD Advantage comes into play.

An AMD Advantage laptop will feature the combo of Ryzen 5000 APU and RX 6000M GPU. In addition, it will also ensure the following characteristics:

The first laptop with AMD Radeon RX 6000M mobile GPU is Asus ROG Strix G15 Advantage Edition. It comes with Ryzen 9 5900X and RX 6800M. It will be available starting in early June.