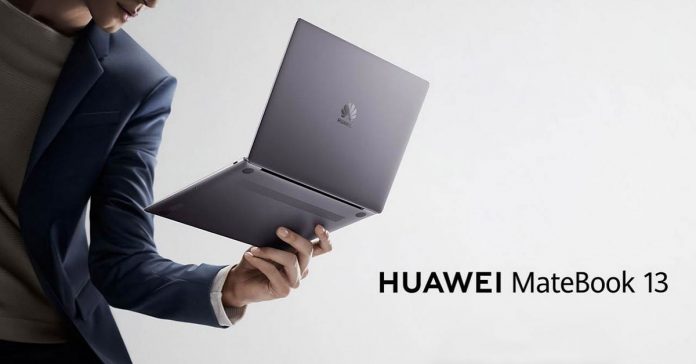 After unveiling the Nova 4 and the Enjoy 9, Huawei announced a laptop too, dubbed the Huawei MateBook 13. A thin, light and bezel-less 13-inch laptop which should counter the likes of MacBooks, Dell XPS, and Asus Zenbooks. Unlike the MateBook X Pro, this one does feature dual fan linkage resulting be better cooling and noise reduction.

The 13-inch display comes with a mere 4mm wide bezels, 2160×1440 (3:2) resolutions, and a glossy finish. It’s based on the IPS display technology with 178-degree wide-angle and a maximum brightness of 300nits. While it isn’t touch sensitive, it does produce 100% of the sRGB color spectrum.

As a bonus, the Huawei MateBook 13 even comes with the Nvidia MX 150 dedicated GPU with 2GB of GDDR5 VRAM. It also gets LPDDR3 memory and NVMe solid state drive. All this packed into a 14.9mm thin metal body that weights just 1.28Kgs.

As for cooling, the Shark Fin Fan 2.0 should maintain the laptop’s temperatures. With over 7 sensors and a maximum spinning capacity of 8000rpm, it does seem pretty promising. While the dual fan takes care of noise reduction, the air volume has been increased by 25%.

The Huawei MateBook 13 has a battery capacity of 41Whr which the company claims will last 10 hours. The laptop gets a headphone jack and two USB-Cs. One on the left (charging), and one on the right (display output). Both are capable of data transfers.

Wireless connectivity includes 802.11ac Wi-Fi, Bluetooth 5.0 and NFC. The NFC’s sole purpose is to aid Huawei Share3.0 technology. You will need NFC enabled Huawei smartphone, enabling you to transfer files at up to 30MB/s.