Despite the trade dispute with the US, Huawei isn’t backing down from the market. The company launched its latest flagship – Huawei Mate 30 Pro using AOSP and without any Google apps, which unsurprisingly saw great success in Huawei’s homeland China. Additionally, the company reported a 24.4% rise in revenue in Q3 2019 compared to last year. So it’s fair to say the Trump Administration’s actions haven’t made an alarming impact on Huawei’s business. And now, the company is adding another product to its mid-range line, labeled “Huawei Nova 5z“.

As suggested by the title, the Nova 5z looks almost exactly like the Nova 5i Pro launched in July of 2019, making it the 6th entry to the Nova 5 lineup. I was a little intrigued as to why Huawei would release so many phones under one banner which is very unlike its other series. So, I Googled to see if the number ‘5’ is associated with any positive stuff in Chinese tradition. However, that wasn’t the case. Maybe the company just felt like it, who knows?

Tailored for Generation Z (as Huawei says), the Nova 5z has a fashionable design and great specs.

As mentioned in the title, the Nova 5z features an identical design to that of the Nova 5i Pro. It has a 6.26-inch rounded LCD panel with a Full-HD+ (2340 x 1080) resolution. The phone has minimal side & top bezels and applies a punch-hole technology for the front camera. Similarly, there’s a quad-camera setup on the back and a fingerprint scanner underneath. Nova 5z falls under the lightweight category, weighing around 178 grams. The back of the phone is made of 3D Hyperboloid Glass, with finishes of different shades. Talking about the color, the phone comes in three: Emerald Green, Aurora Blue, and Black.

The quad-camera on the back is placed in a 2×2 matrix layout, exactly like in the aforementioned Nova 5i Pro. There’s a 48MP f/1.8 main camera, followed by an 8MP ultrawide, a 2MP macro, and finally a 2MP depth sensor lens. Coming to the front, there’s the 32MP f/2.0 selfie camera housed inside the punch-hole cutout on the top-left corner of the display. 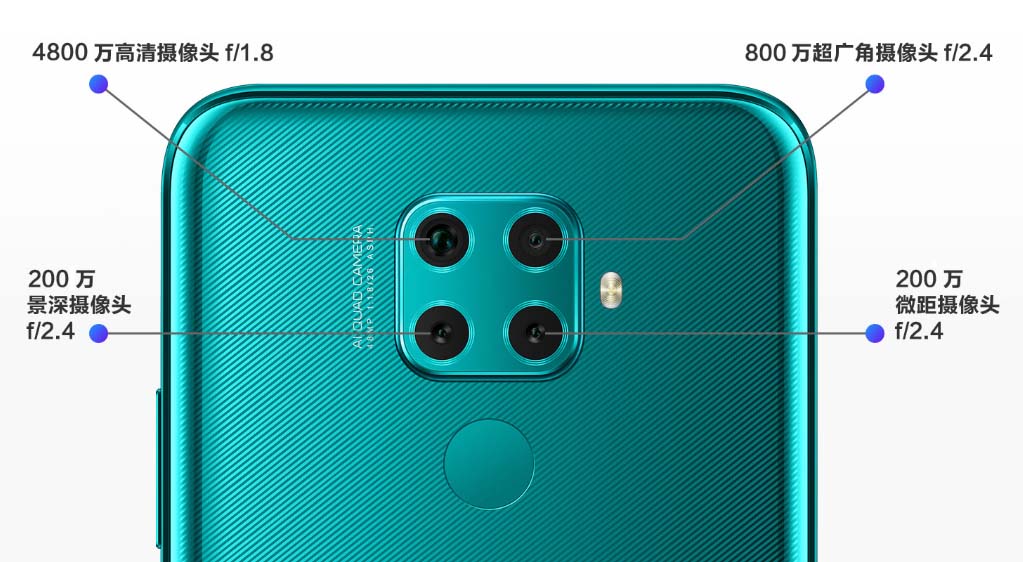 Nova 5z comes with Night View for night photography, as well as Portrait Mode, and AI Beauty Mode. Embedded with Huawei’s DaVinci Architecture NPU (Neural-Network Processing Unit), the phone is capable of giving you excellent camera performance through the help of AI.

On the performance end, the phone is powered by Huawei’s Kirin 810 chipset (7nm) and the equally powerful Mali G76 GPU clocked in at 820MHz. The 810 is a great SoC especially for mid-range devices and easily outperforms the Snapdragon 730 (8nm) found in the regular Redmi K20. The fabrication process is where it’s at! Recently, Huawei has been coming up with some great mid-range devices. If only those were priced accordingly in the Nepalese market!

Additionally, the company’s Ark Compiler (which can also be used to port Android apps to Huawei’s Harmony OS) yields efficient resource handling for smooth app experience. On figures, there can be up to 29% app execution efficiency and 32.68% system response boost. Furthermore, the GPU Turbo feature enhances gaming performance even more. This is supported by 6GB of RAM and either 64 or 128GB of internal storage, which can be expanded up to 256GB using a Huawei NM memory card. Nova 5z runs Android 9.0 (Pie) with Huawei’s EMUI 9.1 on top.

Fuelled by a decent 4000 mAh battery, the phone supports 20W fast charging. It can tank up to 50% within 30 minutes of charge. On normal usage, the Nova 5z should easily last a day.

What else would a Gen Z want? Hmm? Yes, video editing of course. The phone is equipped with an AI video editing feature. It doesn’t support NFC and neither is it waterproof.