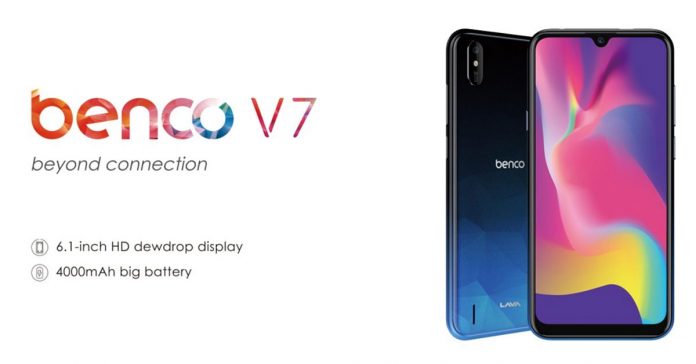 Benco V7 comes as the latest addition in Lava’s Benco series. Lava, as a smartphone maker, was a company that was all but forgotten. However, with Benco V8 they tried to make a strong comeback in the budget segment. And now, the series has a new addition.

The device has a 6.1-inch IPS LCD panel with HD resolution and a 19.5:9 aspect ratio. The screen has a dewdrop notch upfront, however, it’s basically the water-drop notch. A 5MP front camera is also housed in the notch.

As for the rear camera, it is a single lens of 8MP. Beauty mode is available on both front and back cameras. However, the bokeh mode is only available on the front camera. Furthermore, there’s also a quick capture mode with which you can capture instant photos instantly when the screen is off. Moreover, the front cam aids the face-unlock system of the device at a claimed time of 0.4s.

Under the hood, the device runs on Unisoc SC9832e. It has a RAM of 2GB and the storage capacity of 16GB. However, the storage can be expanded up to 128GB. The battery too is a huge one of 4000mAh and offers a standby time of 493 hours.

The benco series was launched primarily aimed at youths. And with a gradient-like design in the V7, design-wise the device certainly serves its purpose. But with competitors like Xiaomi and Nokia lurking just around the corner, it will take much more than just a good design in order to attract customers.

The price of Lava Benco V7 in Nepal is Rs. 9999. It is available for purchase from select mobile retail shops all over Nepal.