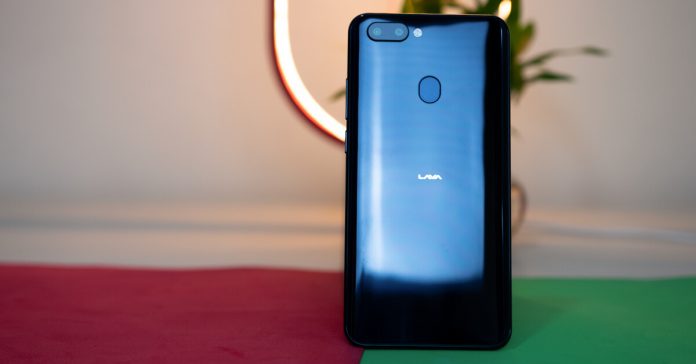 Although the Indian smartphone maker Lava hasn’t gained that much of popularity in the smartphone bazaar, their bar and feature phones are quite renowned in the market. And at the time when Chinese smartphone companies are tussling to gain the market share especially in the budget and midrange price bracket, Lava brought Lava R5 as a contender in the competition. But has the company bundled enough features to please the smartphone audiences? We tried to find out in this Lava R5 review.

So, Let’s start the things with the design. Although the back is made of plastic, I quite liked the device’s sleek look and feel. It’s also easy to hold and feels comfortable to use. It is equipped with a glossy plastic, which gives the vibe of a glass material. So, the looks of the Lava R5 is somewhat appealing. The frame on this device is also plastic, so it got me a little bit concerned about its durability. Even in my 1 week of use, it already got some scratches on its back.

But despite the presence of the plastic back and plastic frame, it doesn’t bend and there were no any sorts of creaks. So there is nothing to worry yet.

On the display side, the Lava R5 comes with a tall 6.2-inch IPS panel with a 19:9 aspect ratio. And yes, there is a notch, which is wide and very obtrusive. So I didn’t quite like the notch on it. If you also hate wide notches like I do, you can always go through the settings and hide the notch. So, coming back to what I didn’t like about this display is the resolution. Now, this phone costs some Rs.23000 and it has got an HD+ display. This might partially be due to the fact that the chipset that’s running on this phone supports only HD+ display.

And with all the HD+ display on a big 6.2-inch panel, one can see some pixelation on close inspection. So, the sharpness is just okay at best. Having said that, all the other aspects of the display are quite good.

I quite like the color accuracy; the viewing angle is decent and the brightness is ample with good sunlight legibility. Even on the broad light, I was able to easily view the contents on the screen. Since the phone also has an ambient light sensor on the board, you don’t have to adjust the brightness on the screen every now and then. Also, you get a gorilla glass 3 which is good to see on budget phones.

Performance has never been the strong suit of Lava phones. And the Lava R5 is no exception on that respect. The phone comes with MediaTek Helio P22 chipset, which is an average processor for the price. But Lava has shown its generosity by providing 4GB of LPDDR4X RAM. Since the budget smartphones usually come with a relatively sluggish DDR3 RAM, the LPDDR4X RAM adds quite a fluidity on the performance. And talking about the storage, the device boasts 64GB of onboard memory, which can be further expanded with a dedicated SD card slot.

So, with a combination of an average chipset and DDR4 RAM, the device performed accordingly. It ran smoothly while performing day to day tasks. Minor apps and games ran smoothly without any hiccups. Multitasking and switching between the apps hadn’t been a problem either. The performance, however, was not the same while playing graphics-intensive games. PUBG was playable only at low settings, and when changed to medium settings, I faced some lags and stutters. So, I can say that if you are more into the heavy games, the Lava R5 may not please you much.

On the software side, you get Android Oreo 8.1 out of the box with a Lava’s Star OS skin on top. Lava has promised a Pie update sometime in Q2 of this year. On to the UI, you get a lot of bloatware on first boot, but you can delete it hassle-free. Other than that, There is nothing to talk much about the software here. The UI is clean and functional just like any other android phones out there.

Now let’s move on to the camera. The Lava R5 features a dual camera setup with a 13MP primary shooter backed by a 5MP depth sensor. With the dual camera on the board, the device can capture the portrait images. And if you ask me, I was quite impressed with what Lava R5 had to offer on the portrait front. The phone captured some amazing portrait images with proper edge detection. And the blurs look natural. Even if you are not yet satisfied with the intensity of blur, you can readjust it quite easily even after taking the pictures. However, the portraits are inconsistency while capturing in the low light. It quite lacked the sharpness along with proper edge detection. So, if you are taking a portrait image, make sure there is enough light at the disposal. Normal images were rather more impressive. They pack a substantial amount of details and reproduces a fair amount of color accuracy. But you may notice a warm tone in some images, which is nothing serious though. However, low light images were quite lacked that punch. I noticed a substantial amount of loss in details in the low light images. Noises and grains, however, were quite minimal.

Moving on to the selfie part, the phone hides a 16MP front shooter in its notch, which is by far one of the best selfie cameras I have ever seen on any budget phones. The large 2-micrometer pixel size of the selfie shooter captures sufficient light so the selfie on the whole packs great amount of details with an absolute vibrancy.

The selfie camera on the Lava R5 is also capable of shooting portrait selfies. Since it’s all due to the software intelligence, results are not always great. And it also takes some time to process and save the images, which can be frustrating at times. But if you capture selfies in ample light with steady hands, you have good chances to capture some decent portrait selfies.

Now, let’s talk about the battery. Lava has equipped a 3260mAh battery on this device, which doesn’t sound so great when compared with Samsung Galaxy M20’s 5000mAh battery and 4000mAh batteries on the Redmi phones. But despite the relatively smaller capacity of the battery, the backup on the device was rather appreciable. The phone backed me for more than a day on the normal use. Since the phone has a low-res display and a power-efficient chipset, the device didn’t consume much battery. That’s why I always had 25% or more juice left on my phone at the end of the day. So I am fairly pleased with the backup. Charging the phone was not that bad either. The phone comes with a 10-Watt micro USB charger on the box, which takes around 1 and half hour to get the device fully charged.

In the present context, the Redmi Note 5 AI is definitely the budget king in Nepal. It has got a Full-HD+ display, a big battery, and more importantly a capable SD 636 chipset, which is lacking on the Lava R5.

However, on our test, the Lava R5 outperformed the Note 5 AI on the camera department. We found images from both the front and back cameras to be better on the R5. So, if you want a better camera, especially the selfie one, the Lava R5 would probably be a good choice.

But there is still more work to do. We hope Lava will come with better smartphones in the future with a capable chipset, high-res display, and maybe a bigger battery?

Pros and Cons of Lava R5