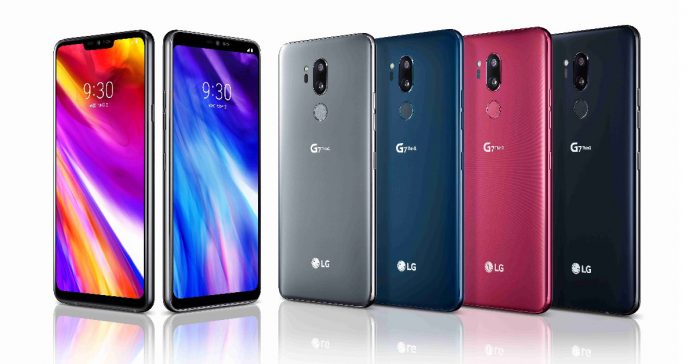 In the MWC 2018, LG unveiled most of its products geared up for 2018. That lineup included a number of home appliances, which were all AI-injected and the term ThinQ came after that. In that event, LG had also announced a new LG V30 Raspberry Rose smartphone, which was basically the same LG V30 in a new suit color. With the launch of the V30 Raspberry Rose variant, critics remarked the smartphone nothing but a consolation to LG fans. They also stated the move as the LG’s way to buy the time for a new and great flagship. As predicted, LG G7 ThinQ, the latest flagship offering from the LG comprises of note-worthy and seems all suited to battle other flagships like Samsung Galaxy S9 Plus, iPhone X, etc.

The G7 ThinQ comes with a tall 6.1-inch display, which is high in resolutions, 1440 x 3120 pixels to be precise. The display, on the top, contains a notch just like the iPhone X, Vivo V9, Oppo F7, etc. The notch on the top can be also masked with the black patch as of now. We might be able to see some noteworthy ways to manage that ugly notch in the Android P. And that won’t be impossible as the smartphone maker has already promised to manage Android P to its users when the new OS version is released. The material used on the display is IPS LCD. Despite the use of IPS panel on the display, it is substantially bright with 1000 nits of brightness. With this display, LG G7 ThinQ is the brightest smartphone with the IPS LCD till date. LG boasted that the display possesses Red, Green, Blue and White pixels to improve enhance the display quality.

Powering the device is a Snapdragon 845 chipset. Previously, LG G6 had suffered quite significantly because of the use of the old processor. Now with a new and capable processor at play, LG G7 ThinQ can make strong impressions in the smartphone market. On the storage side, there are two variants: one with 4GB RAM and 64GB of internal storage whereas the premium one carries an ample 6GB RAM and 128 GB of onboard storage. The premium variant or the variant rich in memory is also remarked as the LG G7 plus ThinQ.

G7 carries Dual 16 MP cameras at the back. Most of the flagship smartphones use the telephoto lens for the secondary sensor. However, LG had always been an exception and the trend continued here too. The secondary camera used on the G7 comprises of the wide-angle lens, which increases the field of view (FOV) while taking the images. With the dual cameras at play, users can squeeze in more content in the frame without a hassle. The camera setup on this smartphone helps the users capture images with up to 107-degrees of the field of view. And talking about the selfie camera, the smartphone is enriched with an 8MP sensor.

The cameras on the device are powered by LG’s home-baked AI platform, specifically used as ThinQ. These AI-powered intelligent cameras use onboard machine learning and recognize the objects in the frame. The camera brilliantly recognizes 18 categories of scene information on the G7: person, flower, pet, food, sunset, sunrise, landscape, city, baby, animal, beverage, fruit, sky, beach, snow, people, low-light and “basic.” It switches to what’s needed.

The G7 doesn’t have stereo speakers, just a single louder one. And it uses a weird new trick to amplify the sound. Cleverly, the Korean giant managed to turn the insides of the smartphone into a giant resonating chamber for its onboard speaker. With this technique, the G7 can produce up to 100 decibels of sound, which is three times more than the LG G6.

LG has always been conscious about the audio quality in its smartphones. So it has kept the 32-bit quad-DAC from the G6 and V series alive in the G7. The company claimed that the quad-DAC will be able to provide a clearer sound for wired headphones. Probably this could be the reason for the LG G7 to include the 3.5mm headphone jack with the handset. The physical connector also allows LG to incorporate DTS:X virtual surround sound. This is the first time the technology, which virtually creates 7.1-channel audio, has been incorporated into a phone. However, the users need wired headphones or a speaker to get the full benefit of its object-oriented positional sound.