The Android tablet space is blooming, which has created room for a lot of new players. And one such player is Motorola. The Lenovo-owned company recently launched the Tab G70 LTE—a product surprisingly capable of making waves in its market segment. In this review, I will be sharing my personal experience having used the Moto Tab G70 LTE for over a month.

Before we begin this review, let’s take a quick look at what the Moto Tab G70 LTE has to offer in terms of specs.

Motorola entered the Android tablet market last year with the Tab G20, which frankly was nothing extraordinary, and thus flew under everyone’s radar. The company then followed it up with the Tab G70 LTE which is anything but forgettable. This is the best mid-range Android tablet that I have tested in a while, even better than the Realme Pad, which was easily the best-in-class tablet last year.

For starters, the Moto Tab G70 comes with a big 11-inch screen. Not only this, its 2K resolution is pretty great as well. Now, it isn’t exactly unheard of in this price range, since the Nokia T20 that costs a lot less than the G70 also has a 2K screen. Regardless, the display is the main selling point of this tablet. At 400 nits, this screen is more than bright enough for indoor usage.

Also, the contents look sharp enough even when laid out on a display of this size. It maintains decent contrast levels as well but since it’s an IPS panel instead of AMOLED, you are obviously not going to get deep, inky blacks here. That being said, the screen is a little too warm in the default profile for my liking, although I can easily adjust the color scheme from the display settings.

Anyway, if you primarily intend to use this tablet for multimedia consumption, you will love the new Google Entertainment Space that comes built-in here. It is basically a content aggregator that brings popular and trending shows from different platforms into a single shared space, thus making it easier to keep track of everything you are watching, have watched, and those on your wishlist. While this concept sounds great, I was not able to make the most out of it. First, it doesn’t include Netflix in the main feed even though it is recognized as a streaming app (in the recent app section). Other apps that I use like Curiosity Stream and Nebula shared the same fate as well.

Also, the whole “Resume Watching” section was missing from my feed along with the “Listen and Read” category. I even tried updating the app but to no avail. It looks like a geo-restriction to me so I’m not sure if it’s going to be fixed anytime soon.

Getting to the playback quality itself, the Tab G70 even handled 4K videos on YouTube pretty well. For some reason, YouTube thinks this is an HDR-supported screen while Moto doesn’t mention it anywhere. As a result, you can technically play HDR videos on this tablet, but the color depth and illuminance levels are way off from what can be considered “HDR” quality.

Likewise, I also faced trouble streaming HD content on Prime Video, which is extremely popular in the Indian sub-continent. The thing is, Prime Video uses hardware acceleration for HD streaming. But it stops playing videos and throws an error message every time I try to turn that on my Tab G70.

I think this is a software bug on Motorola’s side since the tablet does have Widevine L1 certification and can stream HD content without any issue on Netflix. Hopefully, Motorola will patch this issue with a software update ASAP.

If you can look past the Prime Video issue, I still think Moto Tab G70 is a great tablet for multimedia, where its speakers further solidify my claim. You get a quad-speaker setup here with two units each on the opposite sides. They sound loud and I did not notice any audio crackling even at the highest volume. Also, its instrument separation is some of the best I have come across in midrange tablets.

Unsurprisingly, the bass is missing in the default equalizer settings, but you can always tweak it to your liking via the Dolby Atmos app that comes pre-installed. While a bunch of budget and midrange tablets also support Dolby Atmos audio, I have seen the equalizer app come built-in only on the Tab G70 and a handful of Lenovo tablets so far.

Inside the app, you can choose from different pre-built sound profiles or make a custom one. There are even some AI-enabled functions like reverb reducer and dialogue enhancer.

Let’s now talk about the design and the hands-on feel of the tablet. It weighs a little under half a kg which does seem a lot when you think about it. But let me tell you that it doesn’t quite reflect in terms of comfort under daily usage. A part of it is because of how uniform the weight distribution is over such a large surface.

Motorola has also cleverly gone with plastic for almost one-third of the back panel here. On one hand, it helps keep the tablet lighter, while it also makes for a great grip to hold the device. It also incorporates IP52 dust and water repellent design, which is just the icing on the cake. Since Motorola has put so much thought into the design and display on this tablet, you would think it has cut some corners on the performance department. Well, not really. With everything I have discussed so far, the company has still managed to fit in Helio G90T inside. This gaming-focused midrange processor was nothing sort of a revolution when it debuted in the Redmi Note 8 Pro some two-and-a-half years ago. And I have the same feeling with the Tab G70.

Let’s face it, there is no other tablet with a better chipset in this price range. The Galaxy Tab A8 and Realme Pad come close with the Unisoc T610 and Helio G80 respectively, but they’re still not quite as powerful as the G90T.

While I mostly used this tablet for content consumption with binging tons of movies and videos on Netflix and YouTube, I also enjoyed quick gaming sessions every now and then—especially PUBG Mobile and MLBB.

You can bump graphics to HD and frame rates to High on PUBG Mobile, although I found Balanced graphics and Ultra frame rate to be the best settings. Under this, the gameplay was quite smooth for the most part.

Additionally, I did not expect the gyro sensor to work as well as it did either. As expected, relatively lightweight games like Mobile Legends: Bang Bang play just fine even at the highest settings. 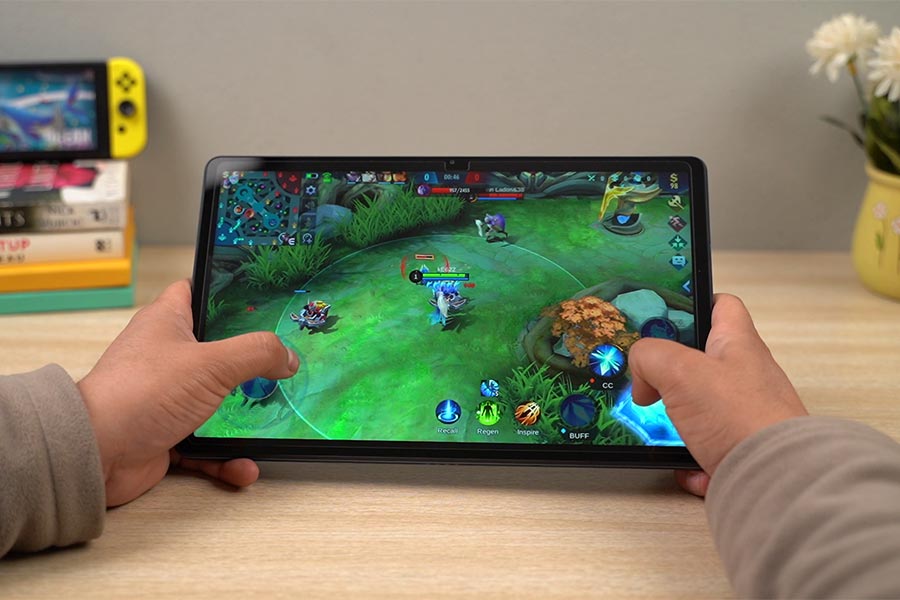 Having said that, the Tab G70 does get a little warm as you near the half an hour mark—especially on the top plastic portion—thereby resulting in some stutters and frame drops. But that’s to be expected from a mid-range tablet I guess.

Furthermore, extensive gaming takes quite a toll on the battery as well. On a normal usage though, I got at least 7 hours of screen on time from its 7700mAh battery. Motorola ships the Tab G70 with a 20W charger, which is quite faster than what the competition is offering. Despite this, it still takes close to three hours (2 hours 50 minutes) for a full charge.

Moving on, the one thing that has bugged me during the review is just how little time Motorola has spent on optimizing the software given how great Moto Tab G70’s hardware is. It boots on Android 11 out of the box and I am quite disappointed that it’s plain vanilla Android with no “Moto magic” of any sort.

And pure Android experience on a tablet can get confusing—like how you need to swipe a little further than you would normally on a smartphone to trigger the recent tabs. There is not any sidebar or quick settings to help you with navigation either.

Also, most apps that I use on a daily basis aren’t quite optimized for the big screen. The tablet just blows out the mobile version of the app to fit into the larger screen estate, which is quite evident when you are switching between apps. You can even notice lags when navigating through the UI! It’s not as bad as other budget tablets, but they’re still noticeable.

The other not-so-great thing about the Moto Tab G70 LTE—or any other midrange Android tablet for that matter—is the cameras. It brings an 8MP camera on the front and a 13MP shooter at the back, and neither of them is anything to write home about.

They’ll get you through your casual video calls and online classes, but that’s about it. Don’t expect it to take great images or anything. 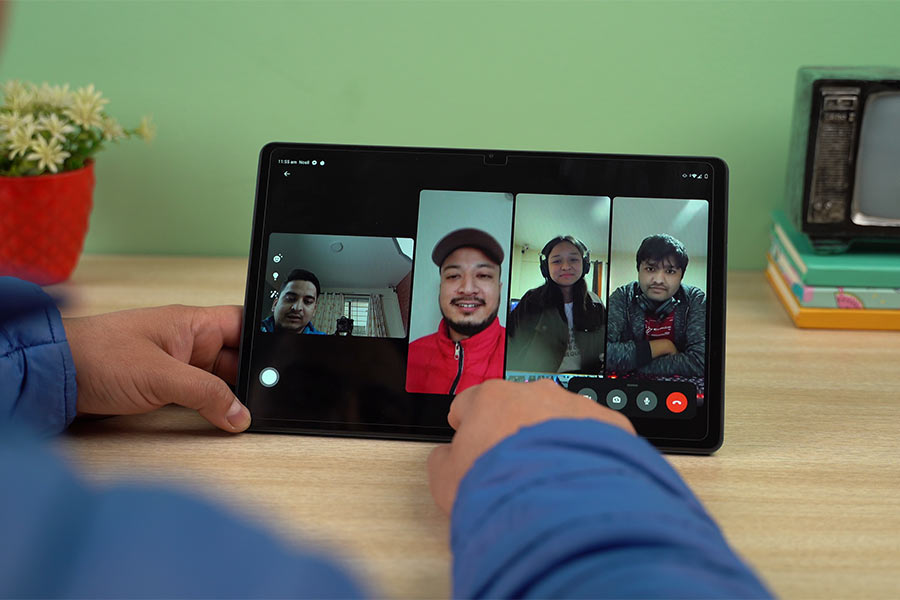 Photos from the Moto Tab G70 are too contrast-heavy and with little detail. Interestingly enough, you can take portraits from both cameras.

The rear camera even has a flashlight, which is something we don’t see that often in midrange tablets. As a result, you’ll be able to scan documents and notes even when it’s dark.

Oh! I almost forgot. You can even buy a third-party stylus and use it to take notes here. Or attach a keyboard folio via the pogo pins and use it as a mini laptop. Though Motorola hasn’t specified any compatible accessories, your best bet will be to go with the ones made for Lenovo tablets since the Tab G70 is a rebranded Lenovo P11 Plus after all! 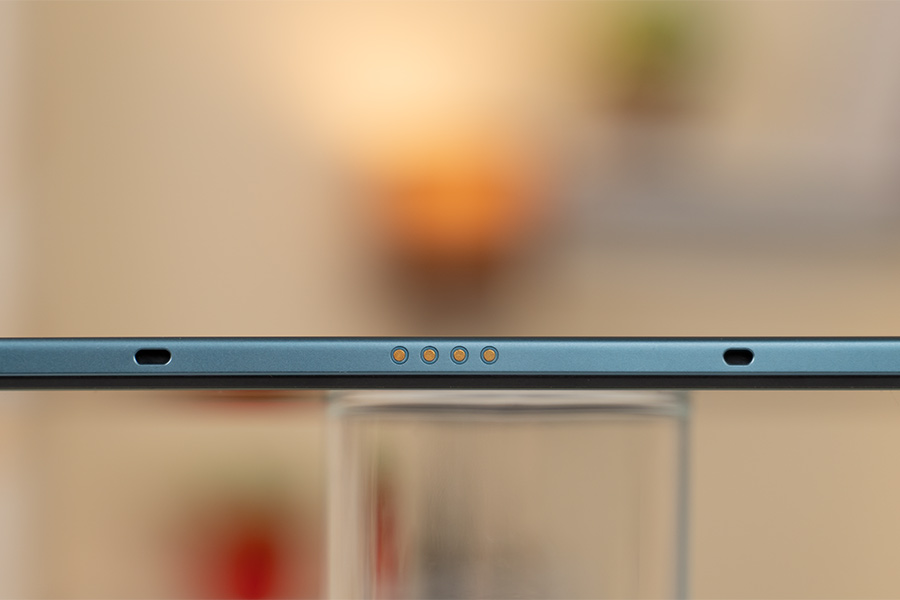 Also, thanks to its LTE support, you can insert a SIM card and enjoy mobile data wherever you go. I wouldn’t exactly recommend taking calls via its four giant speakers for privacy reasons though! But if you have wireless earbuds lying around, that shouldn’t be a problem. Mind you that the Tab G70 skips a 3.5mm headphone jack! Likewise, Motorola offers this tablet in a sole 4/64GB variant, but the storage is expandable via an external microSD card.

This brings us to the end of this video. And you might have figured it out already that I’m quite impressed with the Tab G70. It does have some flaws but the overall package that you are getting for INR 22,000 is quite good. It brings a great 2K display, good-sounding stereo speakers, decent performance, and all-important LTE connectivity. In addition, there’s also the option to buy third-party accessories to boost your productivity.

Despite all this, I strongly believe that Motorola needs to work on the software side of things. For a device with such a heavy emphasis on content consumption, the aforementioned issue with HD streaming on Prime Video shouldn’t be a thing! I’m also hoping the overall software experience gets better with the Android 12L update.