Vivo seems to have finally realized what it had been doing wrong all this time. Just roll back few months, they used to launch the Y-series which are overpriced and underpowered in many ways. So, the outcome is well, the Vivo Z1 pro and the Vivo S1.  The Vivo S1 (Rs. 34,690) is slightly pricier than the Z1 Pro and is competing against the likes of OPPO F11 and the Galaxy M40. And looking at the specs, the Vivo S1 looks impressive, but is it any better than the competition? Let’s find out in our Vivo S1 review.

Okay, first thing, let’s get done with the display. It does not have a punch-hole display like the Galaxy M40 but the notch here is so tiny, it’s barely obtrusive. The bezels too are very less, overall the display looks clean.

It’s a 6.3 inches Super AMOLED screen so you can imagine how it is. The colors on it look vibrant and the blacks look dark making for very good display experience. And side by side with the IPS panel of the competitions, the display on it is far better. 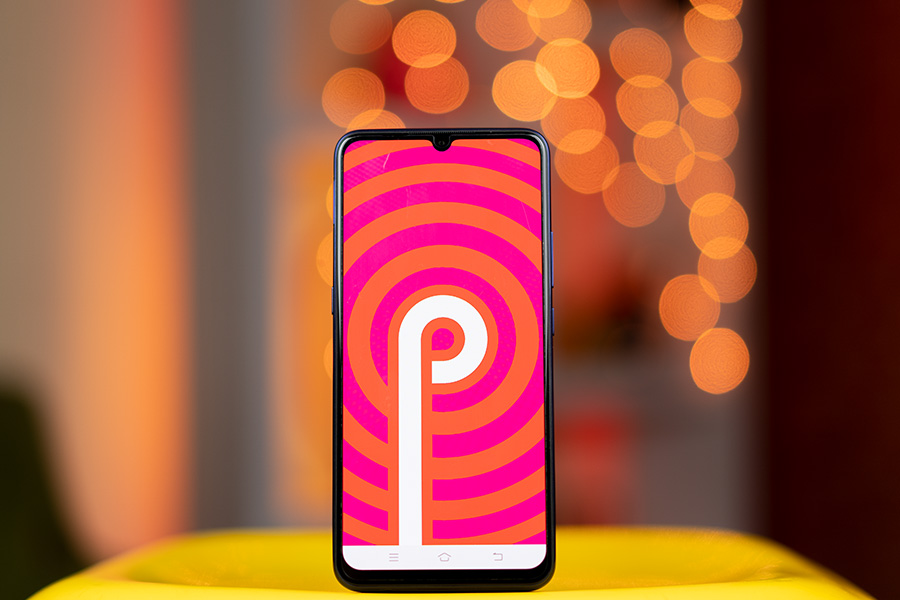 And this AMOLED screen is a house for an in-display fingerprint sensor too which unlocks fast but don’t expect anything of OnePlus 7 Pro (Read review) kind. The sensor, I would say is fairly accurate, but I have had instances where it has not read my fingerprint altogether. But that has only happened a few times. So no worries!

You also get a dark mode that helps save your battery and protect your eyes, so that’s a handy feature to have. You have different modes from where you can choose the screen color and make it bright or slightly warmer and such. It’s totally up to your preference.

The display indoors is bright obviously but even outdoors, it’s moderately bright. There’s an Always-on display feature too, which makes sense on this AMOLED panel. Apart from your usual date, time and battery percentage, you can get a messenger badge if you get messages and such as well. Overall, I have liked the display experience on this one. But, moving on to the back, things don’t look that great.

The Vivo S1 has a plastic back and the sides are plastic too. So, durability could be a concern in a long run. But the design is nothing to complain. It’s appealing, feels good to hold and will not disappoint you.

However, smudges are something that is inevitable and I am not someone who likes casing up their phones, so I’ve had a tough time. But usually, people case their phone up so it should not be a huge problem for most. 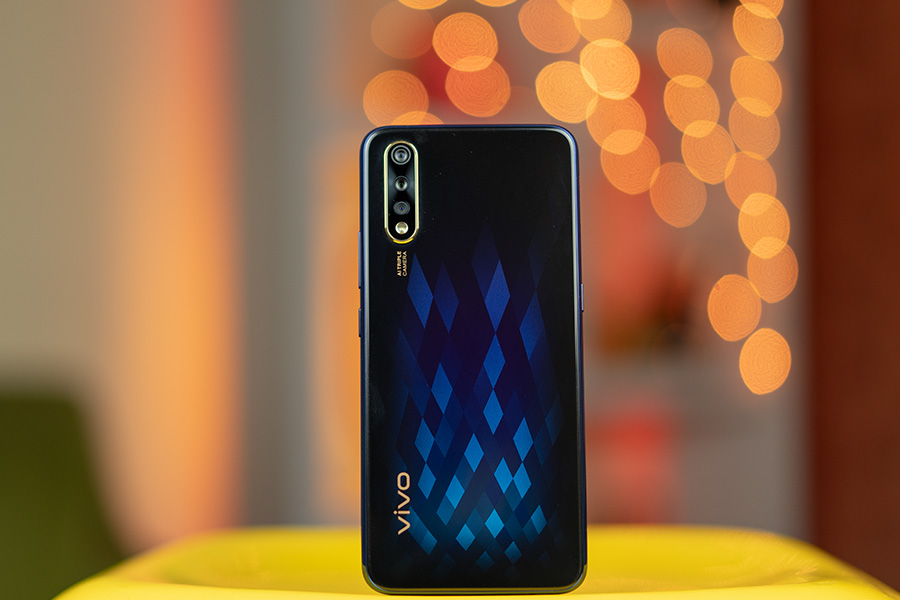 More about the design, you have these diamond-shaped patterns at the back which looks very unique and I think will appeal to most people. The vertical camera array at the back has this golden lining surrounding it which kind of make the cameras stand out in the overall design.

You get the power and volume buttons on the right and an AI button on the left. It can be used to trigger Google assistant or google search whatever you so prefer. On pressing it twice, however, you can trigger either Google search, google assistant or image recognizer. While I don’t use it that much, it can come in handy sometimes. Although, I wish the buttons could be more tactile. It’s plastic and you will know it right away.

Down below, you get the same old Micro USB like in most of Vivo smartphones, a single firing bottom speaker and a headphone jack. 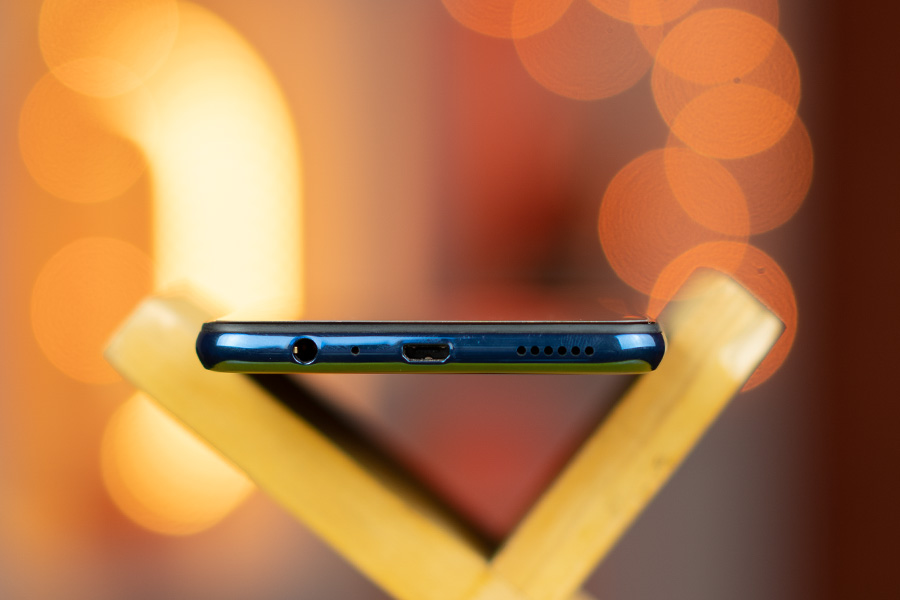 The output from the headphone jack and the mono speaker is nothing to well write home about. It’s pretty average like what you get with other midrange phones. So, overall, the build is plastic, but the design I think is good enough, it looks good, so I am okay with it.

In terms of performance, the Vivo S1 has the new MediaTek Helio P65 chipset. It does offer improvements in the CPU performance compared to last-gen Helio P60 and P70, but strangely, the GPU performance has been down-graded. This one uses the Mali G52 GPU while the P60 and P70 use a much powerful Mali G72. Strangely, the chipset does not support UFS storage but has Bluetooth 5.0 support.

And as a matter of fact, we know we get phones with Snapdragon 712 and Snapdragon 675 in this price range whose performance is, well, better than the Helio P65. But, the real-life performance has been good I must say. Day to day tasks run as they should.

I have never faced a single problem in my everyday usage. It has taken up the most intensive of the tasks very well, so I will not complain. PUBG runs in HD in High settings with some stutters here and there. But I preferred medium settings as it gave me smoother performance.

While we are talking about PUBG, Vivo seems to be really focused on giving their users the best experience. If you have watched my Z1 Pro review, I had mentioned that there are several features like being able to reply to texts on the screen while playing games, being able to run the game in the background while it loads and reminds you with a timer, etc.

The phone also has this exercise where it trains you with the help of sounds so that you can better locate your enemy. Some of these features are PUBG exclusive wholesome are for other games too.

But again, if the choice of chipset would have been better, I would have loved the device more. Take gaming for example. Not that there is a problem while playing PUBG or other high-end games, but it would run much smoother with Snapdragon 712 and Snapdragon 675.

Talking about the memory, you get of 6 GB DDR4X RAM and 128 GB of EMMC storage which you can expand up to 256 GB via a dedicated slot.

The phone comes with the latest Android 9 Pie with its own Funtouch OS 9 on top. I used the Vivo Z1 pro read the review of it, you would know how not so fun Funtouch OS is for me.

But, if you are a Vivo user, you should have no difficulty using it. It has this upward swiping toggle menu which I had the most difficulty getting used to initially. Also, the arrangement of things in UI could be implemented better.

Since the display is AMOLED, I have applied this dark mode which has made the entire theme dark which looks good normally but it’s kind of weird on WhatsApp and Instagram.

Talking about the software-based Facial unlock, it’s fast like all Vivo phones and the in-display fingerprint sensor is also swift and mostly accurate. So, this was my primary security unlock option. 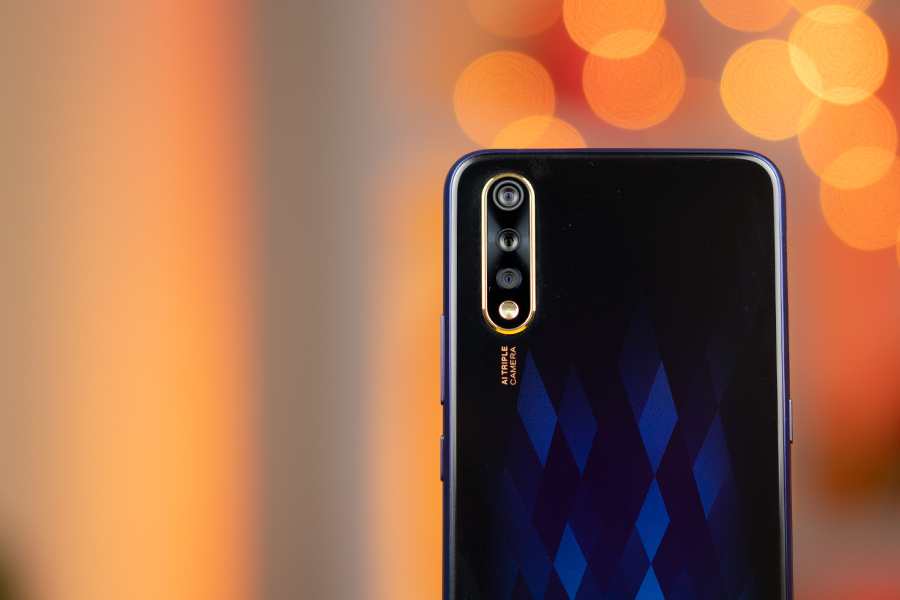 And let me tell you one thing, although the camera setup of the S1 looks similar to that of the VIVO Z1 Pro, it isn’t. From colors to details, the S1 captures better photos. The S1 also has slightly more saturation in pictures but that looks good when compared to undersaturated images from the Z1 pro.

On to the wide-angle images, they are equally impressive. The colors look good the same as the primary lens though if you compare the details, you will find the primary lens doing a better job.

Normal Vs Wide-angle Shots
1 of 4

For portraits, you get two options, one is portrait lighting and other is aperture mode. In the aperture mode, you can change the blur and focus after taking pictures while in the portrait mode you cannot. And talking about the portrait images, well, they look slightly saturated. The color tones in the skin looks somewhat unnatural. And the edge detection is not very proper either.

But the good thing is, you can choose from various different types of background blur which is fun sometimes.

Selfies from the 32MP camera look good. They have a good balance of colors and maintain exposure levels very well. But I have to say again, the skin tone is not very natural. Talking of skin tones, there is AI beauty option which basically makes you look prettier.

Again, comparing the selfies of the Z1 Pro and S1, it shares the same story as the rear camera. The S1 clicks pictures with the richer color tone, making it look better than the Z1 Pro.

There is also something called Fun videos in the cameras which are basically like what we get on Instagram. But the quality is far better than on Instagram. You get a lot of filters to choose from. Plus, it can be fun sometimes when you are in a mood to play around.

You have a portrait feature for selfies as well. You get tones of options for background blurring which is a feature not so useful but still nice to have. Edge detection is a slight problem as the blur is purely software. Otherwise, it does a good enough job.

Talking about night time images, there is no night mode feature here, which is strange, because even all the midrange phones have one. So, maybe that will arrive with a software update. And standard night time images are well, grainy and muddy and lacks maintenance of exposure.

As for videos, I was disappointed to not see a 4K option. There’s only 1080p, 720p and 480p. And its video recording capabilities are not so good I have to say. Videos in 1080p look wobbly, they are not stabilized. 720p videos are better stabilized than the 1080p option. But, overall this is not your ideal video camera as I have found on my tests.

The Vivo S1 comes with a sizeable 4,500 mAh battery whose endurance has impressed me a lot. You can get over a day on normal usage. Plus, you can use various battery saver modes to increase endurance further.

And, I am a pretty heavy user and if the battery lasted me for some time over a day, then a normal or moderate user can expect their battery to last even longer.

You get a Fast charger inside the box with the Vivo S1. It’s an 18-watt charger that can take your battery from 0-100% in around two hours.

So, what do I think about the Vivo S1? Well, before I started reviewing this, I used the cheaper Vivo Z1 pro and as expected, the Vivo S1 is a better phone. This one comes with better features like an AMOLED display, better cameras, an in-display fingerprint scanner, and a better design. So, in many ways, this one is a slightly upgraded version of the Z1 pro, except for the performance; that was better on the Z1 pro.

But Should you buy the Vivo S1? It depends on where you live! If you are from Nepal, Bangladesh, Pakistan or Philippines, where the S1 is available, it’s a good offering for some Rs. 34,690 (US$300).

However, if you are from India, you have the option to get the Realme X, which I personally think is a way better option. The only thing that’s missing with the Realme X is the wide-angle lens, which the VIVO S1 has, but apart from that, the Realme X is better in almost every aspect.