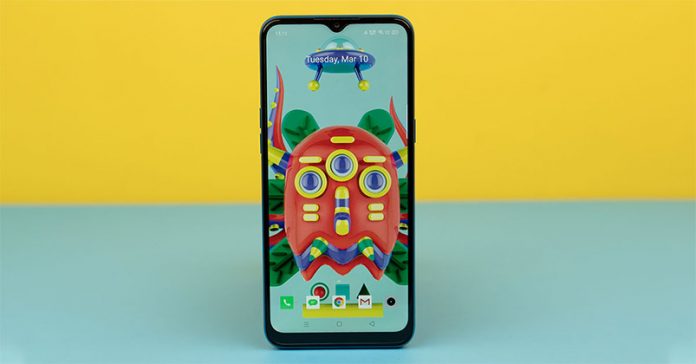 When it comes to midrange phones, consumers have a lot of options to choose from. Despite that, I feel like there are very few options in the budget segment. Though less in number, this market is totally dominated by the likes of Realme and Redmi smartphones. And today, I have the new Realme C3, which goes head-to-head against Redmi 8. The Realme C3 here has been gathering a lot of hype because of the new Helio G70 chipset, which claims to be the best budget gaming chipset. But, what about the other aspects of the phone? Let’s find out in our Realme C3 review here.

And before I get started, there are actually two variants of the phone depending upon the region you live – Indian & Global. The Global variant comes with a fingerprint sensor and an additional macro lens at the back, and that’s the one coming to Nepal as well. I have both these variants with me and have been using them alongside the Redmi 8 for like a week. Starting with the design, the phone is made of plastic as you’d expect, but to be honest, the plastic back and frames feel quite good on the hands. The back is kinda interesting as well, with its radiant finish that reflects differently depending on how you look at it, and the textures for a better grip. It also doesn’t suffer from smudges, so I hardly had to clean it up. As a result, Realme hasn’t included a clear case inside the box. It’s got a decent bit of weight & has no creaks either, and thus doesn’t feel like a cheap phone. All in all, I’m really digging the design of the Realme C3 and I gotta say, its plastic back is as good as it can get. The side-buttons are fairly tactile and get the job done. On the bottom, there’s a speaker grille and a 3.5mm headphone jack and its quality is pretty average as you generally see on budget phones. Moving to the display, it’s a big one. You get a 6.5-inch IPS panel with an HD+ resolution, which comes with a trendier 20:9 aspect ratio. All this makes for a big phone and I had a hard time navigating through the Realme C3 given how tall it is.

Talking about the display quality, although the brightness levels and the color reproduction are no problem, I noticed an uncanny level of sharpness on the videos. I’m certain one couldn’t tell it right away, yet it becomes vividly apparent after a while. Additionally, it also lacks the Widevine L1 certification. So, despite having good-enough specs on paper, the display on the Realme C3 was kinda disappointing and therefore may not totally please the multimedia fanatics. On the contrary, Samsung Galaxy M11 with a similar 6.5-inch HD+ IPS display is of much better quality. All this makes one thing clear – you shouldn’t judge a phone just looking at its specs; real-life usage is where it’s at.

Now let’s talk cameras. The vertical camera arrangement on the back, as you can see, has quite a bump, so you would definitely want to put on a decent case here. And Like I said earlier, there are two versions of the Realme C3. The Indian variant has a dual-camera setup with a 12MP main sensor and a 2MP depth sensor. The global variant has an additional 2MP macro lens- making it a triple camera phone.

But this doesn’t rule out the fact that the camera on the Realme C3 is sub-par. I’ll let the images speak for themselves. The first thing that you’ll notice in the images from the primary lens is the fact that they’re lacking in detail. Even when taking pictures from the regular 1x setting, the images turn out as if you had been zooming it using a 2x lens.

Apart from being void in detail, the colors aren’t any great either as they look very washed out and it utterly disappoints when it comes to details. Portraits, on the other hand, are no different. The bokeh effect is almost entirely wasteful and not worth sharing in social media.

The extra macro lens on the global variant is just okay, I guess, and surely isn’t anything spectacular. It would have been great if Realme had included a wide-angle lens instead of the gimmicky 2MP depth sensor and macro lens.

Coming to the selfies, once again, the 5MP front-facing camera just can’t seem to lock-in any sort of detail, and the HDR isn’t good too. However, you can take a portrait selfie from the front camera.

Turning to the night time images, the results are grainy and lack details yet again. But that’s a short-lived victory right there. Both Realme and Redmi haven’t provided a separate “Night mode” and have it reserved for their mid-range and premium phones only. All in all, it’s clear that Realme really needs to pay greater attention to detail in their cameras.

Nevertheless, what can be labeled good, is the performance. Powered by the new Helio G70 chipset, I was eager to test out how it fared against real-life usage – and in most cases, it impressed me.

The G70 tries to revolutionize what we’ve come to expect from a cheap budget phone. It has an octa-core CPU with two powerful Cortex-A75 cores and six Cortex-A55 cores. Handling the graphics is the Mali-G52, which is decent too.

Having said that, though the performance is not bad at all, it is also not as good as what the benchmark scores may have led you to believe. That may be because of the new unpolished & heavy Realme UI, or I also think there’s an aggressive level of battery saving going on in the background. And that’s mostly reflected on Realme C3’s multitasking ability.

It’s very weird – the phone can’t seem to be able to hold apps in the memory for an extensive duration. In a brief period, the phone just gives up. And the measly 3GB of RAM variant I have isn’t doing Realme C3 any good. Even right after a fresh restart, with very few (and I mean really few) apps installed 2.6GB of the available 2.9GB memory is already occupied.

How is that acceptable? Realme should immediately look into the matter, as it absolutely crumbles the smartphone experience.

The Realme UI isn’t nearly as “complete” as I’d expected and the phone also comes with a bunch of bloatware. I think the company’s struck a deal to earn some money with this move and I won’t complain as you can uninstall all of them.

Moving to the gaming, the Helio G70 gave quite impressive results. Call of Duty ran well in low graphics and medium frame rate and there was no stutter or frame drop throughout the gameplay. More importantly, the phone didn’t heat up even after a prolonged gaming session.

Similarly, PUBG was playable on HD graphics with the high refresh rate turned on with no frame drops. However, I did notice some stutters here and there. Also, it did get mildly hot, but not in a way that affects the gaming experience. Other relatively light games like Clash Royale, Injustice 2, and Kung Fury run fine without any problem.

Talking about the security, you also got a physical fingerprint scanner on the global variant. The placement’s no problem, but with the ridged back and a lack of proper edges, my finger would often fail to recognize where the scanner actually is.

When it did, the sensor works fine though it’s definitely not the fastest one I’ve used. Also, sweats & humidity easily stick on to it, and I would often have to clean it up for the fingerprint scanner to work again. Also, there’s face unlock which works just fine like every Realme phone.

Getting to the battery, the 5000mAh cell on the Realme C3 is amazing. It is easily a 2-day battery phone, which is aided by a ton of power-saving features. Even with heavy usage, I got about a day and a half of usage.

The only disappointing thing is the Micro USB charging port and the 10W charging. On the contrary, the Redmi 8/8A not only comes with a faster 18W charging, and they also have the newer USB Type-C port.

To wrap it all up, there are a lot of things to like about the Realme C3, and a couple of things to complain about too. The phone’s got a solid design and the performance will not disappoint, but the cameras and the display certainly need some reworking.

That brings me to the burning question – should you get the Realme C3? If you’re tight on budget, I don’t see how you could go wrong with it. But if you are planning to use the phone for a long time, I strongly feel like you should spend a little more and get yourself a decent mid-ranger instead, like the Redmi Note 8 or the Galaxy M21. With just a little more investment, you’ll be getting a whole lot of benefits!

However, here in Nepal, Realme has priced the C3 at Rs. 17,000, which is Rs. 500 more than the 64GB variant of the Redmi 8. With Redmi 8, you are going to get better glass body design, Type-C with fast charging, bigger 64GB storage, and a slightly better camera. Hence, Redmi 8 seems to a better value for money in the budget category. However, if you want the best gaming performance at this price, there isn’t a better option than the Realme C3.