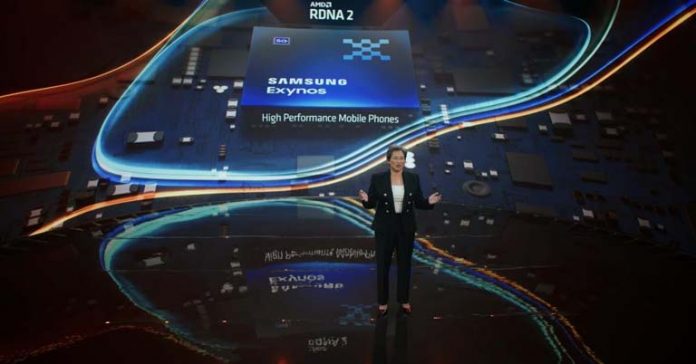 There has been a lot of hype around Samsung’s upcoming flagship processor as it is confirmed to feature an AMD graphic solution. According to a leaker, Samsung has already started testing the GPU, and the initial test results look promising.

The latest report comes from Ice Universe, who we know, is very reliable when it comes to Samsung leaks. According to him, Samsung has wrapped up the initial tests on the first RDNA 2 smartphone GPU from AMD.

The screenshots shared in the tweets show the GPU scoring 8568 and 8134 in two instances of the 3D Mark Wild Life test. It also achieved an average frame rate of 52fps and 50fps, on the two tests respectively.

It is the biggest score ever achieved by a smartphone in that particular benchmark, leaving behind Exynos 2100 and Snapdragon 888. The scores are even better than that of the iPhone 12 Pro Max, which scored 7,442 with its quad-core GPU.

The answer is probably no. Ice Universe has mentioned that the chipset used in the test is based on Cortex A77 architecture. We expect Samsung to go with newer cores (Cortex X2 and Cortex A77) for the performance cores in the Exynos 2200. Therefore, the chip that AMD GPU is being tested on is not Exynos 2200.

We cannot dive into this conclusion yet. First, we only have access to the initial GPU performance of the upcoming chipset. The result is impressive, partly because we are comparing it with the present-day solution. The true competitors for Exynos 2200 will be Snapdragon 895 and Bionic A15 and not their predecessors.

For reference, Apple reported a rough improvement of 8.3% GPU boost moving from A13 to A14. Similarly, Snapdragon 888 has a 35% better GPU than its predecessor. Moreover, we have not yet talked about the M1 chip in the latest iPads. They are at top of the 3D Mark Wildlife test with double the score of the upcoming AMD GPU.

That being said, it should not take away the excitement from the GPU in the Exynos 2200. Samsung has promised AMD RDNA 2 microarchitecture, which we find on the latest gaming consoles. In addition, the GPU will have features like ray tracing and variable rate shading.

According to the same leaker, we will get to know about the AMD RDNA 2 GPU on the upcoming Samsung Exynos chip in July. The event was initially planned for June but was later postponed a month later. Since the Note series is canceled this year, the first product with the AMD GPU should launch next year, most probably the Galaxy S22 series.