Home Reviews Samsung Galaxy A03s Review: Nothing Out Of The Ordinary The last couple of months have been monumental for Samsung. The firm made headlines with its newest foldable portfolio, followed by premium mid-range smartphones like the A52s 5G and Galaxy M52. In the midst of all this rush, the firm has quietly launched the Galaxy A03s. I have been lugging the phone as my daily driver for the past few weeks. And, in this review of Samsung Galaxy A03s, I will be sharing my experiences on how the latest budget phone from Samsung fares in normal day-to-day usage.

With that out of the way, allow me to begin this review of the Samsung Galaxy A03s with its design. As expected, the phone features a polycarbonate body, and it weighs around 196 grams. Its build quality is quite sturdy with no noticeable creaks whatsoever.

The rectangular camera bump at the back is slim enough to dismiss any notion of wobble when placing the phone on a flat surface as well. To further spice things up, Samsung has added textures on this surface which helps you achieve a comfortable grip. Similarly, this polycarbonate build also helps conceal fingerprints and smudges.

Moving on, the top frame of the Galaxy A03s is pretty vacant, except for the secondary microphone. Most of the ports are located at the opposite end, which includes a single down-firing speaker (that gets sufficiently loud for my taste), a Type-C port, which is always great to see on a budget phone, and finally a 3.5mm headphone jack.

Ports and Buttons
1 of 2

For biometrics, Samsung has placed a fingerprint reader on the side. While it works just fine for a budget phone, I find it to be a bit of a challenge to differentiate this scanner from the side frame. Fair to say, Samsung should have designed it with deeper grooves, so that there wouldn’t have been as much accidental touches as it does now.

Coming to the display, the Galaxy A03s features a 6.5-inch TFT LCD panel. As you would expect from a budget phone, it features an HD+ resolution alongside thick bezels all around. Usually, phones with HD+ screens tend to over-sharpen the content to compensate for the inherent lack of detail. Thankfully, that’s not the case here. Still and all, the visuals on the A03s come out a bit soft and the colors don’t look as punchy either. But that’s pretty common with smartphones at this price range anyway.

Weirdly enough, even though the phone is Widevine L1 certified, there’s no HD streaming support on Netflix. Hmmm… Furthermore, its outdoor brightness is strictly average only. 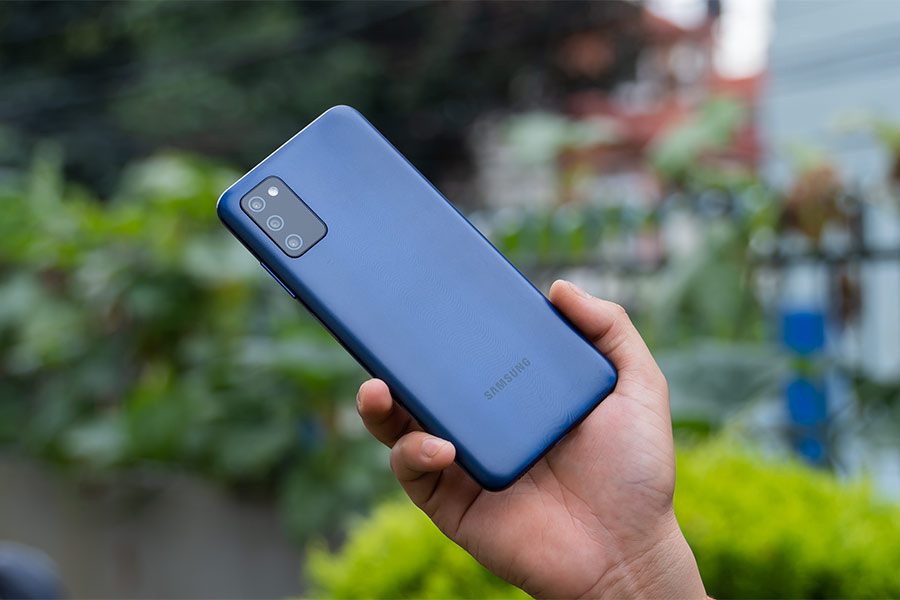 Anyway, this device handles basic tasks like calls, social media, streaming video, and web browsing with ease. However, I noticed a significant delay to load the phone after having kept it idle for a while—or when restarting it. My unit only has 3GB RAM on board and I strongly feel like this is one part of the problem.

In terms of gaming, I had no problem playing titles like Clash of Clans and Piano Tiles here. That being said, the gameplay is quite restrictive on the more resource-hungry titles. For instance, you can play PUBG Mobile at Balanced graphics and Medium frame rates only—under which the gameplay is pretty stuttery.

Moreover, the A03s warms up around the camera bump during such demanding workloads as well. So, long gaming sessions on this phone is completely out of the question.

As for software, at the time of writing this review, the Samsung Galaxy A03s is currently on Android 11-based One UI Core 3.1 with August’s security patch. Samsung has come a long way from its TouchWiz days, but again One UI (even the Core version) doesn’t feel fluid in an entry-level phone like this. Moving on to the camera, A03s has a triple camera setup at the back, led by a 13MP sensor.

The primary sensor is capable of taking fairly pleasing photos. The images look sharp and have good colors too. That being said, the budget origin of the phone is quite evident when you try to pixel-peep. Samsung’s algorithm desperately tries to compensate for the lack of detail with extra sharpening.

Similarly, it struggles to maintain exposure during low-light conditions. Photos turn out dark, grainy, and there is no dedicated night mode either.

In terms of portraits, this 2MP depth sensor struggles to maintain highlights. Also, you can notice a sharp color shift when taking pictures under portrait mode. Furthermore, the extra saturation on its portrait photos doesn’t look right to me either.

Normal Vs Portrait
1 of 8

Taking close-ups from the onboard 2MP macro camera with its fixed focus is expectedly a nightmare as well.

Moving on, the selfies from the 5MP front-facing camera come out smooth while the portrait selfies have blown-out highlights.

Normal vs Portrait Selfies
1 of 6

Getting to the videos, you can record up to 1080p/30fps footage from the Galaxy A03s and their quality is exactly how you’d imagine from a budget phone—wobbly, lacking in detail, and the likes.

Over on the audio, as aforementioned, the phone has a single down-firing speaker, which I found to be sufficiently loud. Furthermore, taking calls on this phone was also rather satisfactory for me. The network reception has been good, and the proximity sensor also works fine.

This brings us to the battery. Samsung has included a 5,000mAh battery here, which has provided me about 6 – 7 hours of screen-on time on average. I mostly used the phone for social media consumption, playing lightweight games, and streaming videos on YouTube. Unfortunately, the phone lacks any fast charging capability and it takes around 3 hours 45 minutes for the phone to go from 0 to 100% using the 7.5W charger available inside the box.

All in all, considering Samsung’s recent budget launches, the Galaxy A03s is a pretty average offering. It has a solid design, an above-average primary camera, and a reliable battery life. That being said, Samsung could have done better in the performance department seeing how Chinese companies offer the same CPU-memory configuration for much cheaper. Its slow charging speed is also a headache material.