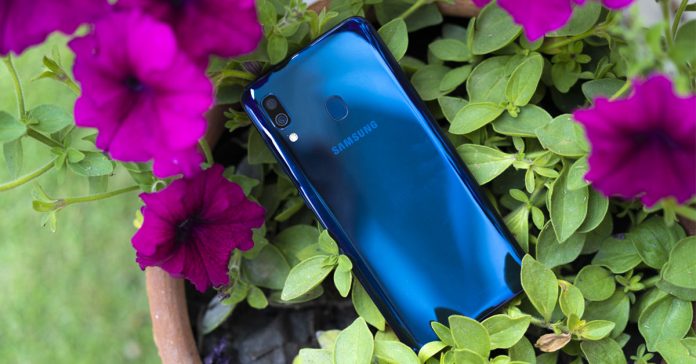 If you don’t know by now, Samsung is in line to create a football team of its own. No, it’s not for the Premier League or any other league. It’s a team to tackle the likes of Redmi, Realme, and Honor. Up until last year, Samsung was constantly criticized for its lack of answer to the budget-oriented Chinese brands, however, 2019 seems to be its year, as the Korean giants have already come up with quite a lot of ‘winners’. Hoping to clinch that same title is the Galaxy A20, a budget phone, that costs Rs. 20,500 in Nepal.

Now from the time I have been holding the Galaxy A20, I have always wanted to talk about its feel on hands. Yes, this is built from plastic. And well, if you still think budget phones cut cost on the build quality, think again.

This phone is light, yet is sturdy, I didn’t bend it like Jack from JerryRig would, but still, it can definitely take a hit! There is no hollow feel, you know, the one that a couple of devices have. It’s not glass like the one on its closest competitor the Redmi Note 7, but it still holds its own ground. However, the back material catches a lot of fingerprints. Even the blue colored A20 I reviewed is quite a magnet. You will definitely need to carry a cloth to clean it as Samsung hasn’t included a case inside the box. And that has added in another problem, as I didn’t invest in a case. This glastic body is prone to scratches. Even when I kept the phone nowhere near keys or any hard objects, the back has developed a lot, a lot of scratches.

Let’s talk about the display now. The Samsung Galaxy A20 has a tall 6.4-inch display bordering a small v-shaped notch on the top. This display is a Super AMOLED panel and the bezels aren’t that pronounced as well. While all of this is impressive and everything, the thing that Samsung hasn’t included here is full HD resolution. But with the Super AMOLED panel, that hasn’t really been an issue at all. 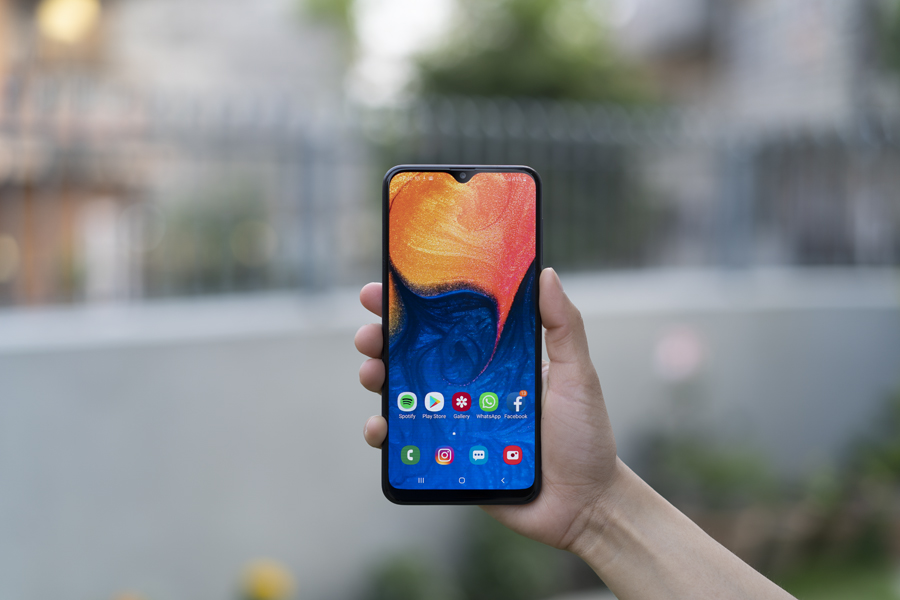 Apart from the issue of searching for that perfect sharpness while viewing videos or reading articles, this display is quite bright and quite colorful. The default wallpaper looks great and I haven’t yet changed it. Weird, I know.

What you will use most on the Samsung Galaxy A20 are the customizations the software offers. While the Galaxy M10 and M20 came with the older Android Oreo out of the box, the A20 runs on Pie with Samsung’s kind of new One UI on top. I recently reviewed the Galaxy S10, and the A20 has almost the same software experience as the flagship. 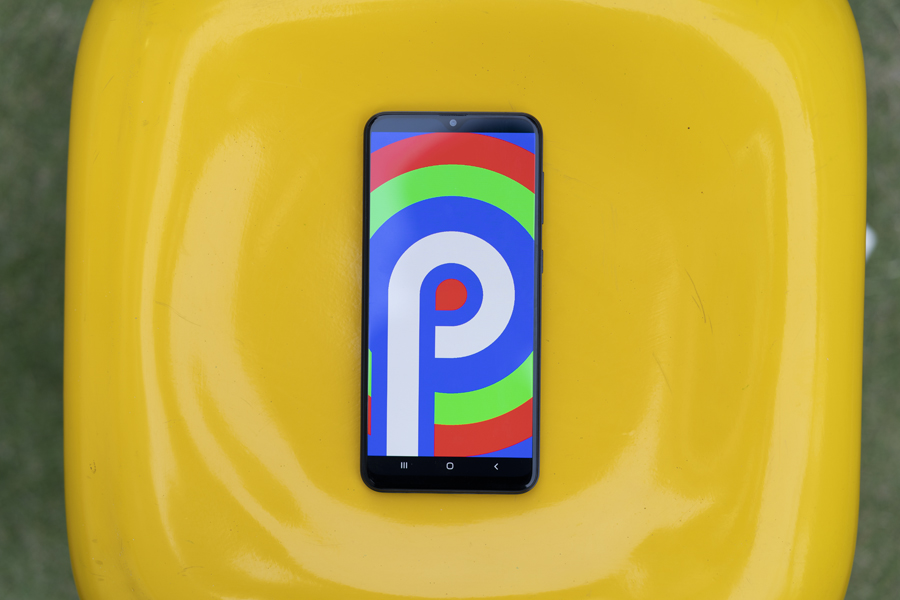 Although Samsung has the double tap to wake, I still think it has to include double tap to lock. I know, I’m nitpicking. What’s nice is the 100 GB of storage you get with OneDrive. The Microsoft apps obviously can’t be uninstalled, but I think I will take that for the extra cloud storage.

If this was a few years ago, reviewing a budget phone meant bashing about the software from Samsung. However, that has changed a little. The One UI, as I said, is light, but still, the apps take a little bit of time to open and the scrolling could have been a lot smoother on the phone.

The raw performance on the Galaxy A20 is smooth. The phone has the Exynos 7884 chipset inside. This is the mini version of the Exynos 7885 chipset that was used in a few Samsung phones like the Galaxy A8+ last year. And like its elder brother, it is a capable processor.

Even gaming on it is not that bad. I played PUBG on a medium setting, and there is only a couple of instances of lags on a single game. Once, a match did start with lags here and there, but once I got to the game, there were one or two minor stutters. Also, while we are talking about performance, just like the A30, this device too has the messenger issue while gaming. If you’re playing something and you get a text message, the whole thing just slows down.

Except for these issues, there aren’t any. The RAM management is good, as I have had no issues with running 6-7 applications at the same time. 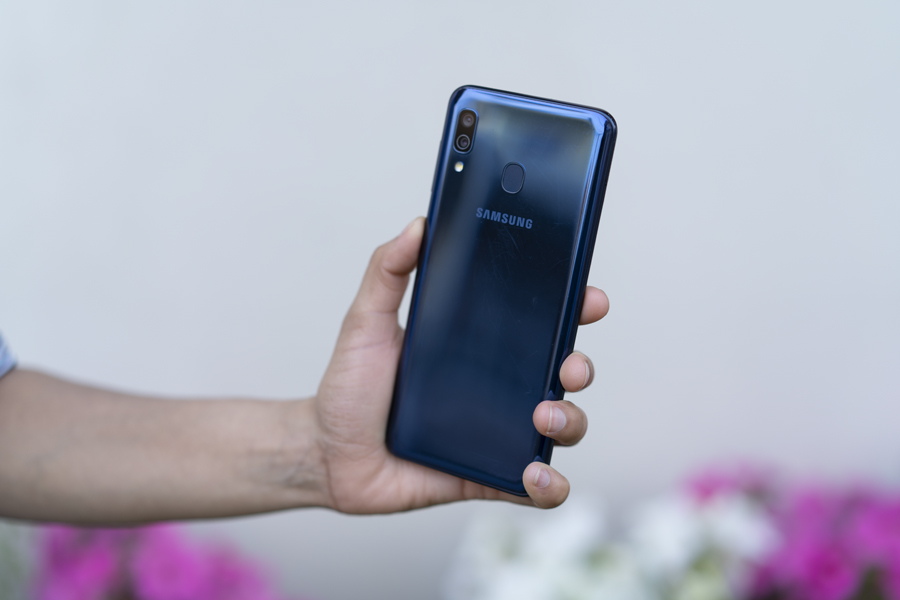 The front-facing camera on the Galaxy A20 rests on the water drop notch up front. It measures 8-megapixel, and if we talk about the selfies, well they look great, that is if you don’t zoom into them as the photos will lose a lot of details. But still, the overall color is great and not overpowering.

If you are in a bright area indoors, the selfies are good too but say the light isn’t that bright, then the above photo is what you get.

The front camera is also capable of capturing portrait selfies. It’s all the software that’s doing the work, and it isn’t doing that work well. The blurring is not on point, so I stayed away from the live focus of the selfie camera.

Let’s talk about the rear cameras now. Like the M20 and A30, you get dual cameras: A 13MP primary lens and a 5MP wide-angle lens.

The best use of the camera, at least for me, has been while capturing wide shots from the smallest of the angles and to capture the scenery. The colors we get here is accurate when compared to the primary camera.

The images also are not that good in terms of dynamic range. But I do like how the photos are brightened up a little bit making the whole thing pop.

However, one thing that bugged me with this phone is that the live focus mode has only worked on people. Anything else, it just shows up a tab with Finding Face written on it.

During night time, the photos have a lot of noise on them. You will also notice grains. While the day time shots have a warmer color tone to them, the night shots have a colder tone. And they are exposed if there is a source of light hitting on them. The shots also lack details, just like during day time but the saturation makes the photos pop if there are shades of colors on them.

And finally, the videos. This device shoots full HD videos at 30 fps. And those videos are a bit wobbly as they lack any kind of stabilization. The colors are natural though. For security purpose, the Samsung Galaxy A20 has both the fingerprint and face unlock option. The fingerprint sensor is placed on the back of the phone and it is easily reachable. With the screen locked, the phone unlocks in around one second. However, with the screen on, the sensor can unlock the device in a snap. I have seen this issue on a couple of other devices too, and I think Samsung can improve this with a software update. For Face unlock, the A20 uses its front-facing camera. The option works great but takes a bit of time. 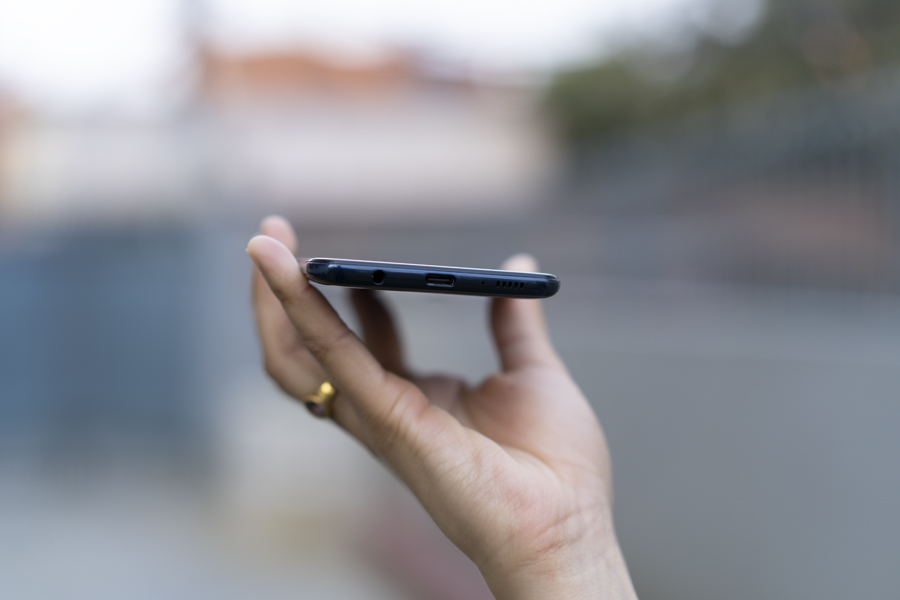 On the bottom of the phone lies a headphone jack along with the speaker grill. The sound from this mono speaker is clear but it’s not very loud. For storage purpose, the Galaxy A20 packs 32 GB of internal memory with an option to expand it via a dedicated microSD card slot.

The best part about this phone right here is its battery. The A20 has a large 4,000 mAh battery inside which has become a trademark on almost all the Samsung phones. At the very first, I talked about the A20 sporting HD display. And that couples well with the battery. 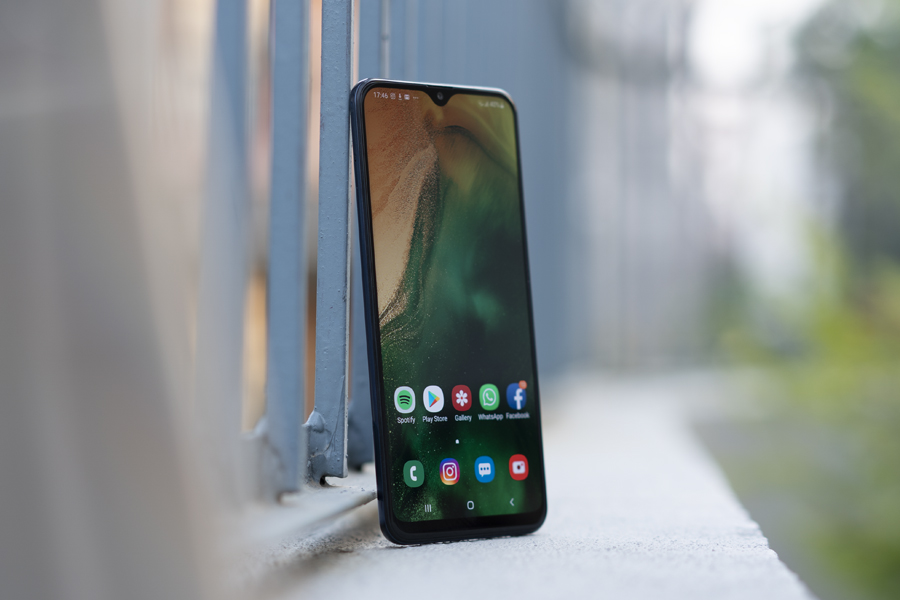 In my use of gaming for a while, watching videos on Youtube, going through a lot of websites, and using social media applications, I got a screen on time of around 6 hours and 30 minutes. How does that reflect on real life and the real day? Well, if you are a heavy user, who does a lot of things on their phone, the A20 will last you for a day, and if you are a moderate user who doesn’t do heavy tasks and doesn’t play games constantly, the phone will run for a day and a half easily. So, in terms of battery life, Samsung has definitely a winner on the Galaxy A20.

This battery takes around 1 hour and 40 minutes to go from 0 to 100% with its included 15W fast charger.

The Samsung Galaxy A20 is a member of Samsung’s huge lineup of the A-series. While it is more budget oriented, the device is definitely good at doing what it does although Samsung has cut a couple of corners for that. But still, it has a sturdy build and a vibrant display. The battery life is great and the camera, for that price is quite decent.

However, if we talk about performance, if you can add some money, you get the Redmi Note 7 which definitely performs better than the A20. So, if you are performance-centric users, you might want to take a look at that phone, otherwise, the A20 will handle your day-to-day usage quite easily.