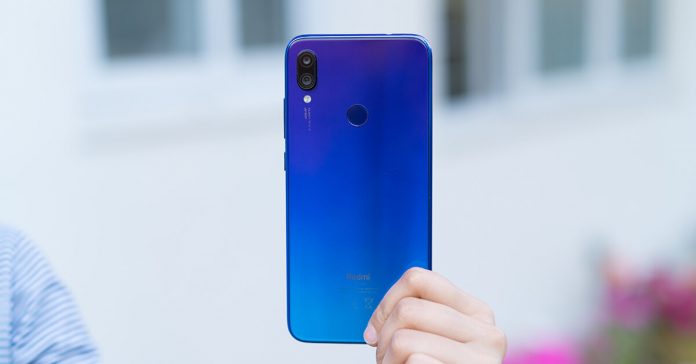 Xiaomi’s Redmi series of smartphones usually set benchmarks in the budget and midrange segments. Most of their smartphones offer excellent value for money due to which Redmi phones often crush their competitors. But recently, there are Honor phones, Realme phones, Samsung’s value proposition A-series, and M-series smartphones. With so much competition, I was wondering what’s next for Xiaomi. To cope up the challenges, Xiaomi stepped up and announced a new sub-brand ‘Redmi’. Under the new sub-brand, Xiaomi dropped the bomb in the form of Note 7. When the phone was launched, it created quite a lot of buzz. And I was really interested to find out the recipe Xiaomi has used on this device to stay alive in the competition. so I tried to find that out in this Xiaomi Redmi Note 7 review.

On the design front, Xiaomi has made a major change. Most of the Redmi phones launched last year had either metallic or plastic back. And most of them looked absolutely dull and unappealing. But Xiaomi has done quite an overhaul this time on the design side of things. The bland and outdated metallic back on the Redmi Note 5 and Note 6 Pro is now replaced by a glass slab. This is nothing new for a midrange phone but the switch Xiaomi made on this device is really worth a praise. It is praiseworthy because Xiaomi has included Gorilla glass 5 protection on its already premium-looking glass back. With Gorilla Glass 5 on the board, the phone will have better chances of survival during the accidental drops. However, the frame is plastic, which I do not find particularly satisfying. With a plastic frame, the durability of the device is quite a thing of concern. And it’s even more concerning as we saw the device failing the durability test performed by JerryRigEverything and Technical Guruji’s durability test video. Although we won’t abuse our phones like the way they do so there is nothing much to be worry yet. And it is quite relieving that the phone feels sturdy on the hold and on the use. Continuing with the glass back, Xiaomi has added a dual tone gradient finish on the back. And needless to say, it looks absolutely amazing. Plus, the Glass back on this device doesn’t attract much fingerprints like the plastic back.

On the display side, the phone has got a 6.3-inch IPS panel. Just like most of the smartphones available at a similar price, the phone comes with Full-HD+ resolution. So the screen looks sharp while viewing the contents. But when it comes to the colors, they look quite washed out. With dull colors, I didn’t find myself enjoying much while watching the videos. But as far as the brightness is concerned, it does a good job. The screen looks bright and is legible even in broad daylight. So I have nothing to complain on the brightness part. 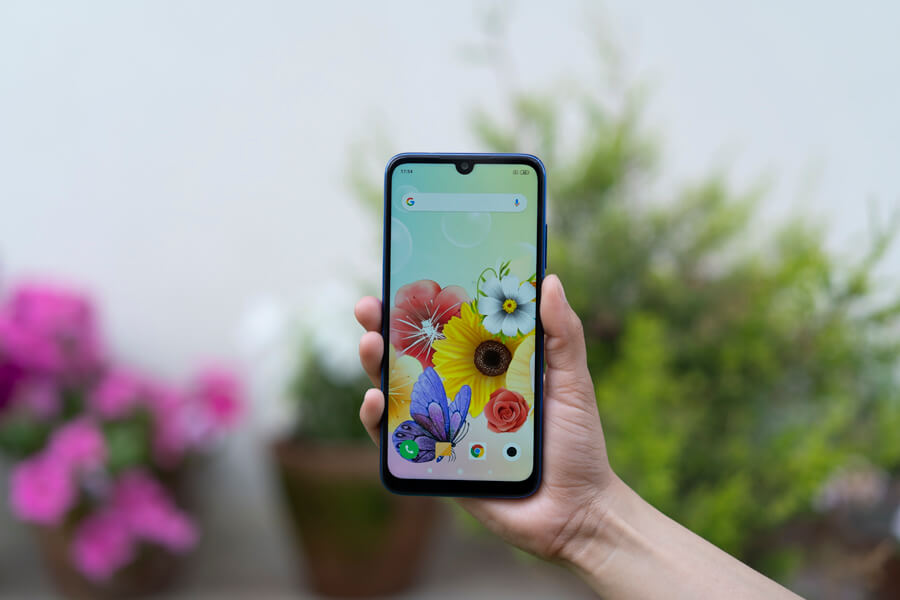 Although Xiaomi has cut down the majority of bezels on the top to increase the screen-to-body ratio, there is a thick chin on the button. The chin also houses a tiny notification LED. Yes, the LED notification on the chin looks awkward. But having one is obviously better than having none.

Although the presence of the LED indicator is a good thing here, I didn’t find it much useful. Just like the Redmi Note 5 and Note 6 Pro, the LED indicator on this device is small, dim and glows only in white. So it’s hard to identify the notification. I might’ve ignored some missed calls thinking it to be a useless Facebook notification.

The camera is the major highlight of this device. It comes with a 48MP primary shooter and it is the highest of resolution on any smartphone. But despite having such a high-res sensor on the board, the phone captures 12MP images by default. It uses pixel-binning technology with which it merges four pixels into one to output bright and sharp images. There is a pro mode as well, where you can capture 48MP images. I tried and tested out the camera on both the modes. But I found 12MP images to be more sharp and bright. And talking about the image quality, they look decent with plenty of details. However, I didn’t find the colors as accurate. The colors on the images look quite dull and faded and don’t look particularly pleasing. So you have to live with that!

On comparing it with the last year’s Redmi Note 5 AI camera, I didn’t find much of a difference on the sharpness part. The colors look quite better here but still not so accurate.

But not to worry. This phone is compatible with GCam and images captured from GCam looks better when it comes to color accuracy. Just look at these samples and be the judge yourself. But since everyone are not quite aware of the GCam and it’s not easy to find and download. So I think Xiaomi should focus on the image processing part themselves in the coming days.

When it comes to low-light photography, Huawei’s Night Mode, Google’s Night Sight, and OnePlus’s NightScape feature are quite popular in the market. And Xiaomi has added a similar Night Mode feature in its camera UI. In this mode, the phone decreases the shutter speed to 1-2 second and takes some time to process the images to bring out details hiding in the dark. I tested the feature and it did bring images brighter than that captured from the normal mode. A slight increase in details is also can also be noticed in the images captured from the night mode. But noises and grains also pop in the images alongside the increased details. So you have to live with that. Although the feature is not polished, the inclusion of the feature is definitely a good thing. I hope Xiaomi will release an update to make the feature better.

Normal Vs Night Mode
1 of 8

Alongside the primary shooter comes a 5MP depth sensor, which comes in handy while capturing the portrait images. And portrait images look amazing. Yes, it has the color accuracy issue but does really a good job on separating the subject and background. We can still see some imperfection on the hair but apart from that, the edge detection has really got better on this device.

When it comes to the videos, the phone can record up to 1080p movies up to 60 fps. Despite having the hardware setup capable for capturing 4K videos, there is no such option in the camera setting. But with what I have, I record Full-HD videos at 30 fps and 60 fps. And the 30 fps videos were more stable. Despite having an in-built Electronic Image Stabilization, 60fps videos were still quite jittery.

On the selfie side, there is a 13MP shooter on the front, which rests on the tiny notch up front. The selfies too look good but the color seems quite washed out. The skin color also looks quite whitish even with the beauty effects turned off. Similar is the case while capturing the portrait selfies. Colors look quite off and there isn’t anything you can do about it. But apart from the colors, I really like the proficiency of the device while capturing the portrait images. Despite having a single camera, the edge detections were quite good.

Talking about the performance, the phone comes with the Snapdragon 660 chipset. MI A2, MI 8 Lite and now Redmi Note 7, the choice of the chipset is getting redundant in the books in Xiaomi. That doesn’t mean the processor is bad. It is a good performer for the price and I was pretty satisfied with what it did on my use. Normal apps run like a breeze and multitasking was fluid. Even while playing the games, the phone does a decent job. Light games run without a hiccup. And graphics-intensive games ran with some minor stutters. PUBG is playable at the medium setting with some occasional frame drops and Asphalt 9 followed the same suit. But considering the price, it was understandable.

As far as the memory is concerned, the unit I am using has 4GB RAM and 64GB of onboard memory. 64GB of internal memory can suffice the needs of the many. But in case of insufficiency, you can always expand it with an SD card. However, it will take up the SIM2 slot.

Now let’s talk about the software. Software-wise, the phone has got the latest Android Pie with Xiaomi’s customary AdUI. I meant to say MIUI but it is more or less the same. When you are connected to the internet, Ads appear here and there, due to which the phone looks like an Ad platform. And needless to say, it is terribly annoying. Please Xiaomi, don’t make your smartphones so cheap that you have to rely on Ads to make an income. Even after spending a chunk of money, nobody likes to see the filthy Ads popping here and there. But other than the Ads, the UI is decent. There are tons of customization options to make every setting of the device match your requirements. However, Xiaomi has made some of the features to be location specific. The quick example would be the Face Unlock feature. It’s not available in certain countries so you’ll have to change your location if you want to trigger the feature. It’s been happening for quite a while now. And I couldn’t understand why Xiaomi does this type of discrimination.

Huge battery is the common trait of Redmi phones. And the tradition continued even in Note 7. There is a massive 4000mAh battery on the device, which provides an amazing backup. On the normal use, the phone backed me for more than a day. At the end of the day, I always found 30% or more charge left on the device. So I honestly have to praise its endurance.

Bigger batteries also have a downside though. It takes a lot of time to get them fully charged. And that problem exists on the Note 7 as well. Despite having support for Quick Charge 4.0, the phone comes with a 10-watt charger on the box. And the stock charger takes around two and a half hours to get it fully charged. Xiaomi recently teased 100-watt fast charging technology. So the inclusion of a mere 10-watt charger didn’t look quite plausible for me. In the upcoming phones, I expect Xiaomi to include a quick charger on the box. 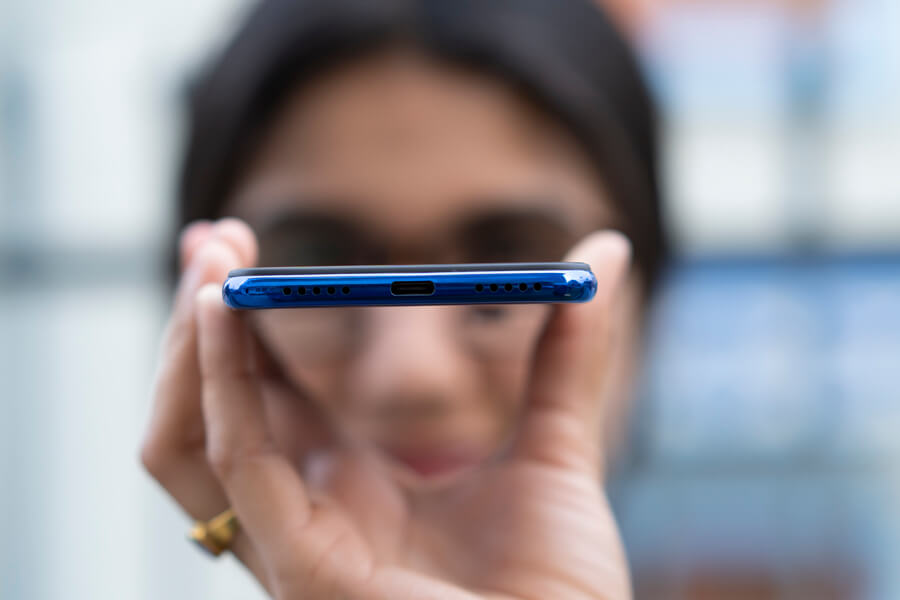 The phone comes with USB-Type C port for charging the device. And it is the first ever Redmi phone to come with the Type-C port. Although it may not matter much to many, it’s a good step forward. Plus there is a 3.5mm headphone jack, which is good news for the audiophiles.

The Redmi Note 7 is a decent phone and is obviously the least expensive phone to feature a 48MP camera. It has got a 48MP camera, good battery life, a decent processor, and most importantly a great design. With the fancy Glass back and Corning Gorilla Glass 5 on the top, Redmi Note 7 is simply unbeatable at its price when it comes to the design. Although the 48MP is more or less of a gimmick and the shots from the stock camera app is not that great, you get amazing shots when you use the GCam app. So if you use the GCam, Redmi Note 7 is a good camera phone as well.

But the display is quite dull and if you are habituated with the vibrant displays, you will notice the subdued colors right away. So if you are into the good display, Samsung Galaxy A30 will definitely please you with its vibrant Super AMOLED display. So weighing all the pros and cons, the Redmi Note 7 is a great phone. And since the device also comes with a variant with 128GB storage for just Rs. 27,000, the smartphone is the best midrange device you can get under Rs. 25,000 and Rs. 30,000 price segment. But you have to make a habit of ignoring the filthy Ads.