Home Samsung The best midrange phone, Galaxy A52 is now available in Nepal in... Samsung officially launched the Galaxy A52 in Nepal back in March at a fairly competitive price. It is one of the best-selling midrange phones of 2021 from Samsung, thanks to its superb specs at an exceptional price.

Because of the ongoing pandemic, Samsung Nepal hasn’t been able to keep up with the demand, and buyers were felt frustrated for months. However, the phone is now available for purchase in limited quantities from select retail outlets all over Nepal. So, make sure you grab one before the stock runs out.

Before moving forward, it’s pertinent to understand that there are two variants of this phone. One with 4G connectivity, and the other with 5G, whose name goes by Galaxy A52s. This article is dedicated to the standard Galaxy A52 which is void of a 5G connection. Having said that, these two phones are basically one and the same except for the difference in the chipset, refresh rates( 90Hz vs 120Hz), and the said cellular connectivity.

While Galaxy A52s 5G is powered by Qualcomm’s Snapdragon 778G, its 4G counterpart comes with the Snapdragon 720G instead. On top of being 5G-ready, the 778G is also comparatively more powerful silicon.

With that out of the way, let’s start with the design. This time around, Samsung has stirred up a completely new look for the A52. The glossy prismatic back of the Galaxy A51 has been substituted with something much more subtle. Featuring a smooth matte finish, this phone is a breath of fresh air. The camera module sees a rework as well. 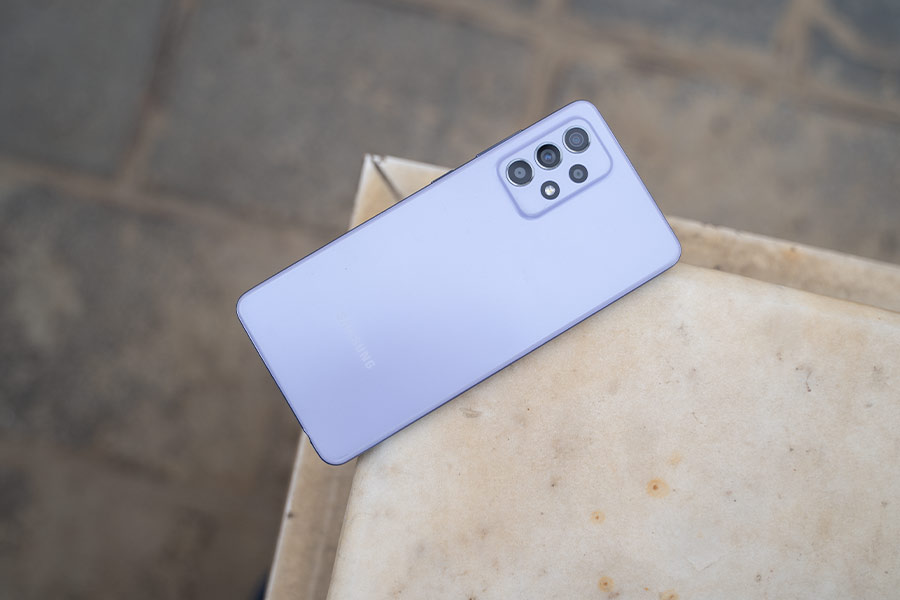 Samsung is already retiring the L-shaped layout that prevailed in the company’s 2020 lineup of midrange phones. Instead, the camera arrangement on the A52 is inspired heavily by the Galaxy S21 series with its beady and pronounced sensor design. The camera bump is pretty minimal although the lenses themselves don’t protrude as much. Another upgrade in the design front is the inclusion of IP67 dust/water resistance.

This is something of a rarity in Samsung’s non-flagship phones and for now, we can only hope that the company keeps this tradition alive in future devices as well. Galaxy A52 is available in four color options: Awesome Black, Blue, White, and Violet—all of which maintain a pastel finish.

In terms of the display, we’re looking at a 6.5″ FHD+ Super AMOLED “Infinity-O” screen. It is protected by Corning’s Gorilla Glass 5. But more importantly, the company has bumped the refresh rate from 60Hz to 90Hz. To note, the recently launched Galaxy A32 4G was the first non-flagship phone from Samsung to feature a high refresh rate screen.

However, it doesn’t employ a variable refresh rate (VRR) mechanism meaning the display won’t dynamically adjust the refresh rate according to the content on the screen. On top of this, Samsung has also nabbed SGS eye comfort certification for reduced blue light emission. You can even schedule the time period to automatically turn this on.

Moving on to the performance side of things, Samsung has gone with Qualcomm’s Snapdragon 720G here. This is a healthy upgrade over the notoriously overused Exynos 9611 in the Galaxy A51, but considering the competition, it’s far from the ideal chipset on a phone of this premium. It’s an 8nm chipset and is found in mid-range phones like the Redmi Note 9 Pro Max.

Anyway, you can choose between 4, 6, or 8GB of LPDDR4X RAM and either 128 or 256GB of internal storage. You can also expand the storage up to 1TB using a micro SD card.

Running the show is Samsung’s One UI 3.1 based on Android 11. The company recently announced its revised software update policy. Under this, Samsung promises 3 years of OS and 4 years of security updates on its smartphones. With this, the Galaxy A52 is set to receive up to Android 14 (or whatever Google ends up naming it) update.

Like I mentioned earlier, this phone has a quad-camera setup at the back. The 48MP primary camera on the A51 has been substituted with a 64MP sensor whereas the rest of the setup remains pretty much the same. You get a 12MP ultrawide camera with a 123º Field Of View (FOV), a 5MP macro, and a 5MP depth sensor.

Unlike the new Galaxy A72 which has a telephoto lens as well, the A52 is only capable of digital zooms of up to 10x. Additionally, Samsung has also brought in OIS on the rear camera. Consequently, you can shoot stable videos even at 4K/30fps by turning on the “Super Steady” mode.

Talking about videos, there’s no 60fps option in any resolution, while you can shoot 4K videos from the ultrawide lens, this does come at a sacrifice of OIS. The 32MP selfie shooter upfront can record 4K/30fps footages too but it’s void of stabilization. Other interesting camera features on the Galaxy A52 include Single Take, Fun mode (developed in partnership with Snapchat and currently exclusive to Samsung phones), Super Slo Mode, Night Mode, etc.

Fueling the device is a decent 4500mAh battery that supports 25W fast charging. Thankfully, you will get the power adapter inside the box—but only a 15W unit. 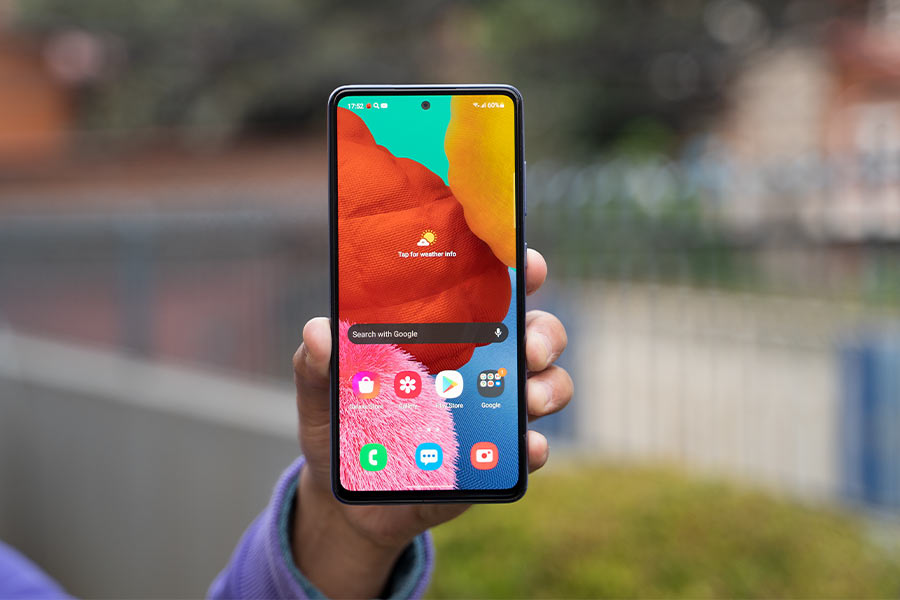 Samsung is claiming up to two days of battery life on this thing but our tests revealed far less endurance. A52 also has Dolby Atmos-certified stereo speakers making it a confident device for content consumption. As expected, it features Samsung’s Knox security as well.

Samsung Galaxy A52 is now available in Nepal for a price of Rs. 41,999. This price is for the 8GB RAM, 128GB storage variant. You can purchase Galaxy A52 from different Samsung retail shops located all over Nepal.