Home Google Google Pixel 7 Review: The Phone Of The Year! So, I have been using the Google Pixel 7 for a month now and I took a little bit of time to bring this review because when it comes to Pixel phones, there are always a lot of bugs to deal with in the first month or so. And a lot of things still needed polishing. So after receiving a couple of updates, I am absolutely loving my Pixel 7!

Just like last year’s Pixel 6, I think Google has once again struck the right balance between awesome experience and good value this year as well. I still think Google could have done more, possibly, and totally killed the semi-flagship lineup from OnePlus, Vivo, and even Samsung’s lower flagship models like the Galaxy S22! But still, given everything this phone offers, I think Pixel 7 could well be “the phone of the year!”

If you look at their specs side by side, Google hasn’t made any drastic changes from last year’s Pixel 6. You still get a very similar design, similar display, same camera hardware (besides the selfie camera), and the same Google experience we know and love. But I still think Google has done a decent job to make the Pixel 7 a proper phone for someone who wants to upgrade from a mid-range device!

Trust me, you are going to love it if you are currently using a mid-range phone!

And the first thing you will really fall in love with it—just like me—is undoubtedly its cameras. If you look at other similarly-priced phones like the OnePlus 10T or the Asus Zenfone 9, they are not very consistent in different situations.

But with the Pixel 7, you are going to get the best photography experience with incredibly natural color science in most of the images. It delivers an excellent dynamic range and the white balance is consistently on point as well.

Before the Pixel 7, I was using the iPhone 14 Pro Max as my daily driver, which you might know has one of the best cameras in the world right now.

It also costs you a fortune though. However, for almost half the price, you are going to get as good—if not better—results from the Pixel 7 versus the iPhone 14 Pro Max.

Just look at these portrait shots; they are simply amazing!

I think with every iteration of Pixel phones, we are seeing improvements in terms of software optimization and I feel like other smartphone brands are just not doing enough!

Having said that, I still think that Google needs to up its game when it comes to selfies since it’s not as good as what the primary camera manages.

The same goes for the ultra-wide angle shots as I found the field of view to be a little narrow compared to iPhones and Samsung.

Plus, the sensor size is pretty small on this ultra-wide angle camera compared to the main lens, so it does struggle at times, while also taking a tad more processing time.

Especially during low light conditions. Yes, Google’s computational algorithm is great, but if they used better, bigger sensors for the ultra-wide camera, I am 100% sure the quality will get even better.

I also think Pixel 7’s videos are alright given the price tag as I found them to have good colors with nice stability. Even so, it’s nowhere near what Apple offers.

So if you are someone who likes filming Instagram reels of your pet or you are an aspiring content creator, iPhones still offer better videography in most lighting conditions. But if you are a casual user like me, the ones from the Pixel 7 are decent as well.

The only thing I don’t like about it is the low-light ultra-wide shots. It’s just terrible!

The new Cinematic Mode could also use some work, given how good the portrait photos were that we saw earlier. When the subject is still, it can capture decent cinematic shots, but once there is any sort of movement, it loses focus. Maybe this could improve with updates, let’s hope.

Now just like the cameras, Google also hasn’t made any drastic changes in terms of design on the Pixel 7 either. But I guess I am completely fine with it. They have upgraded the robustness by offering Gorilla Glass Victus on both the front and the back this time, whereas the camera module now gets a metallic build. And as expected, it is IP68 as well. So yeah, it’s quite a well-built phone. Actually, I accidentally dropped it a few times from about a meter or so, and it was able to survive it all without any damage. Great! And about that new camera module, I have seen quite a few people dislike it. But I like it, and I think it makes it unique and recognizable if someone is holding a Pixel phone.

The thing I’m most fond of about this new camera module the most is that it doesn’t wobble when putting the phone face down on a flat surface. But like with last year’s Pixel 6, it accumulates a lot of dust, so I have to clean it up every now and then. Likewise, because of all the heavy materials like Gorilla Glass Victus, metal frames, and a metallic camera module squeezed inside a relatively smaller body, the Pixel 7 is a bit dense and heavy! So it took some time for me to get used to its heft.

But I still haven’t gotten used to this weird button placement. The power button here is placed slightly higher than where my thumb usually rests, which means I always keep hitting the volume-up button instead. Maybe they could have placed the volume buttons on the left or gone with a different texture or tactile feedback here!

Okay, this is something you should eventually get used to, but I feel like the Pixel 7 could have definitely done better in the display department. As you can see, its bezels are still quite prominent, which makes it look a bit generic like a mid-range phone. Moreover, the thing that’s kinda a miss is that it only refreshes at 90Hz. And because of this, I didn’t find the Pixel 7 to be as smooth as I had hoped. So yeah, Google should have given a 120Hz refresh rate here just like the Pro model for that added fluidity.

The overall quality of the display is good though, if not flagship-level good. The peak brightness is now at 1,400 nits, so it’s plenty bright. HDR10+ works really well on all streaming platforms, and the color accuracy is also appreciable!

I am also enjoying typing on this thing, which is partly because of how good the haptic feedback is. The speaker quality is also okay-ish for the price. It’s not that loud, but I like the overall soundstage. Clear vocals, decent treble, and slightly pronounced bass. So I’m not complaining! The optical in-display fingerprint sensor has also gotten a bit faster with the latest November update, but still, the competition has it beat—both in terms of speed and reliability. So I do hope Google will get a better fingerprint sensor supplier next year!

Now, getting to performance, this is the one area where Google received a lot of bashing last year because of mediocre gaming results and bad heat management. It did improve with a few updates eventually, but the performance was still nowhere near the competition! This year, we have the new 2nd gen Tensor chip co-developed with Samsung, called Tensor G2. But its performance leap isn’t that significant. Sadly, the Snapdragon 8+ Gen 1 and even the last-gen A15 Bionic are still faster and will yield better performance say in 2 to 3 years compared to Google’s custom processor.

But for now, this Tensor chip is plenty powerful for everyday tasks. Even for gaming, I found that the Pixel 7 does a better job than the Pixel 6. You can now play games at higher graphics settings and achieve better-sustained stability as well. Still, Tensor has a long way to go to match the raw performance of Apple or Qualcomm chips.

It’s just a second-gen product after all, so I hope Google catches up soon! Maybe collaborating with TSMC instead of Samsung will do the trick because you know, Samsung isn’t particularly doing that well in the silicon industry right now. All the high-end chips from Apple and Qualcomm are now manufactured by TSMC.

Anyway, what the Tensor G2 does better is with AI-related tasks. Many of the standout Google-exclusive features like fixing blurry photos, extracting text and images on the go, and removing the background noise while you are on a call, all of these are only possible with the new and improved Neural Processing Unit (NPU). 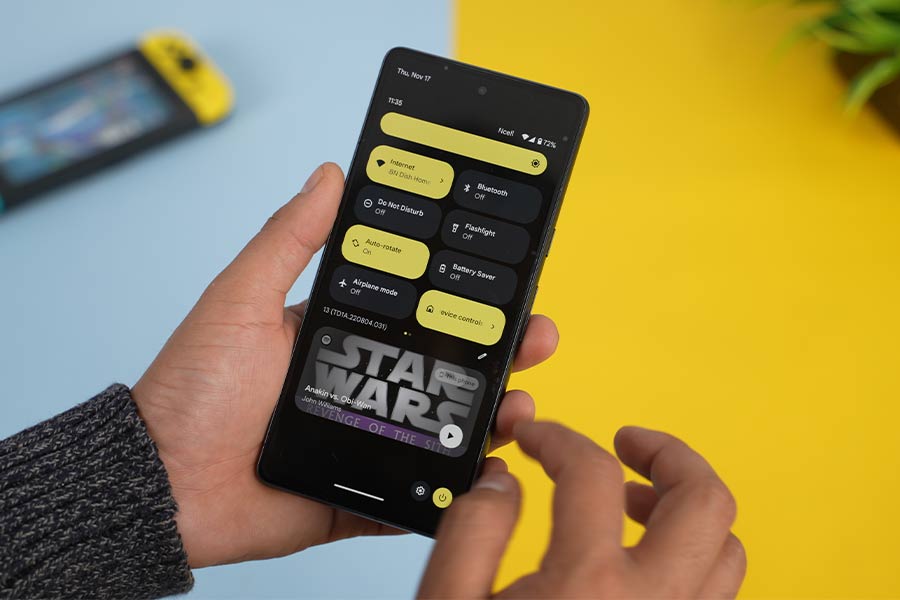 Google also promises 3 years of OS and 5 years of security updates for the Pixel 7. Call me greedy but I think they could have given 4 years of OS upgrades since Samsung’s out here offering exactly that. Even on some of its mid-range phones!

Lastly, as for the battery life, it’s pretty average. But this is me speaking, who is used to the incredible battery endurance of the iPhone 14 Pro Max. On my typical usage with mobile data turned on all through the day, I always have to charge the phone at around 8 PM, whereas my iPhone 14 Pro Max still had like 40% battery left. So coming from that, I can’t say I’m a big fan of the Pixel 7’s battery endurance.

Google has also gone with a conservative approach to charging, just like Apple and Samsung. The Pixel 7 only supports 20W PD charging, which rapidly charges the phone from 0 to 50% in 30 minutes and takes it up to 80% in an hour. After that, the charging is very slow to conserve the phone’s battery health, and it takes an additional 40-45 minutes to hit 100%.

Wrapping up this review, despite some obvious downsides, the Google Pixel 7 is an outstanding semi-flagship phone! And if you are someone who wants to upgrade from a mid-range device to the Pixel 7, it is going to be a great upgrade. Trust me! One crucial thing that I forgot to mention is that if you are living in India, the Pixel 7 is slightly overpriced right now at Rs. 60,000. During the first sale, I got around Rs. 6,000 off using bank offers, although that offer is no longer available. But I am pretty sure that there are going to be similar offers in the coming days, so watch out for that!