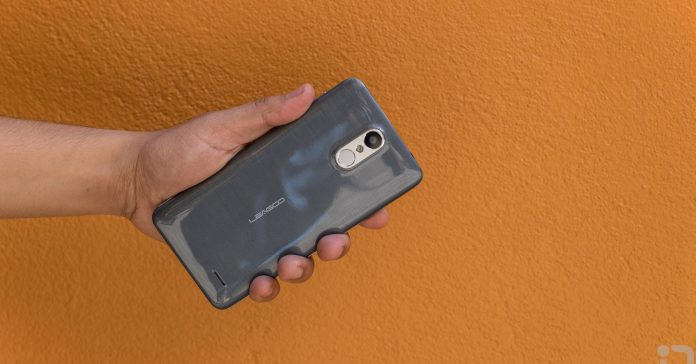 In this competitive market, a new phone cannot make a solid impression on the people instantly. Especially in the budget sector where there is a solid hold on the market by companies such as Samsung, Xiaomi, Oppo, Huawei, and Gionee. Since our smartphone is the most important and the most fragile piece of technology we carry, Leagoo a new smartphone company in Nepal is targeting its device in the solid build segment. The company has now released the successor to the Leagoo M5 which is the Leagoo M5 Plus. For a Price of Rs. 16,599 is it worth the price? Let’s find out in this full review. Visually, the Leagoo M5 Plus is similar in design to Leagoo M5. I really liked the 2.5D glass on top of the display. It feels very robust and premium when using the touch screen. Also, the phone is enclosed in a metallic frame that protects the internals from drops. Due to the presence of the metallic frame the phone feels luxurious in hand. There are thin bezels surrounding the screen which greatly enhances the front looks of the phone. Sadly, I didn’t like the plastic back cover of the phone. The back cover feels cheap and flimsy which gave me a plastic feel. There is a slight camera hump on which the fingerprint sensor is also located but this problem is solved by the plastic cover which comes with the phone. The problem I faced while using the phone was with the lock button and the volume button. Bothof these buttons lacked the feel when pressed. Since the gap between the volume rocker and the lock is less than that of most phones, I frequently pressed the lock button when lowering the volume which irritated me a lot. When it comes to the display, I was really impressed with the 5.5 inch HD IPS screen. Like the Leagoo M5, the M5 Plus is a shock proof phone. The glass protecting the screen is designed to withstand a beating. We all have carried phones with a scattered screen at some point in our lives. Leagoo has made the front glass protection rigid enough to make it shatterproof. Coming back to the display, even though it only sports a 5.5 inch 1280*720p IPS screen, you won’t feel the need for the Full HD screen. The display is vivid and the color saturation is on point. Due to this, the display is bright enough for outdoor usage but in direct sunlight but you do get a glare on the screen. Likewise, for comfortable night-time usage, the backlight of the display can be set to the lowest setting. Performance wise the M5 Plus gets a MediaTek MT6735 Soc which is clocked at 1.3Ghz. This chip is what I believe to be an entry level 4G enabled 64-bit processor. The processors have 4 cores and with the 2 GB of ram it comes with, it is fine for me for all basic smartphone usage. Also, the user experience with app switching is smooth but the problem is that the device doesn’t have a dedicated multitasking button which is a shame in this day and age. Instead, for multitasking, you have to keep pressing the home button and switch apps. There were slight lags while initially opening heavy apps like Snapchat and Facebook which is acceptable at this price range.

In terms of gaming, the phone backed by Mali-T720 GPU which is capable of smoothly running popular games like Subway Surfer, Mini Militia, and Gunship Battle without much drama on the thermal aspect. I was surprised to find out how cool the device was after hours of usage. Although, you do feel the warmth on the metallic area on the camera bump after heavy gaming. In terms of sound, this device is a pocket rocket. It gets the loudest mono speakers in the segment and you can really hear it. Though you don’t want to set the speaker to the loudest setting as the treble of the sound gets extremely amplified which is unpleasant to your ears. The Leagoo M5 Plus gets the now dated Android 6.0 Marshmallow with Leagoo’s own Freeeme OS on top. Except for the dated OS, you do get a clean and simple UI which is easy to use. Like all Chinese smartphones, you don’t get the app drawer. On the other hand, you do get features like double-tap to wake up the device, off screen gestures and scrolling screenshots and non-touch operations. The options in the settings are neatly laid out which is much appreciated. The device sports a dual SIM slot which supports 4G LTE. This means it has dedicated dual SIM slots with separate microSD card slot expandable up to 128GB. The phone also gets a feature know as Turbo Download where apps that are only allowed to download through Wi-Fi only will be downloaded via WLAN and others from 3G/4G networks anyway. However, both Wi-Fi and Mobile data must be turned on for this to work. M5 Plus does come with a fingerprint scanner at the back which unlocks the device with a significant amount of lag. The scanner was many a time unable to recognize by fingerprint and asked for my pattern to unlock the device. Leagoo M5 Plus sports a 13MP rear camera with f2.0 aperture. It takes decent pictures in well-lit condition and low light conditions. However, I didn’t like the quality of the videos it took at the 1280*720p resolution as it had a hard time focusing near objects. It also has a slight camera hump at the back where the rear camera LED flash and fingerprint are placed. Taking about the LED flash, the intensity of the flash is more than that of a notification light rather than that of a camera flash. The 5MP at the front takes average narrow-angled selfies. So taking group selfies with this camera is very difficult.

Battery wise, the Leagoo M5 Plus gets a removable 2500mAh  Li-polymer battery. The battery consumption is balanced out by the low powered quad core and the huge 5.5 inch HD IPS display. So, in my normal usage, it gets about 4 hours of screen on time which is decent for phones in this category. In term of charging the device back to 100%, it took me more than 2 hours with its standard 1A charger. If you’re a person who is a little careless with your phone this might be the perfect phone for you. It can handle a lot of drops without any problem through. The phone has decent styling, performance, good display and a shock proof design. All in all it’s a good buy if you ask me. What I disliked about the Leagoo M5 Plus?

Here are some of the alternatives to the Leagoo M5 Plus to consider:

ZTE BladeS6 priced at Rs. 14,490, the ZTE Blade S6 sports a 5-inch HD display and has last year’s Qualcomm Snapdragon 615 Chipset with Adreno 405 GPU with 2GB of RAM which is a great offering for the price. Backing up this device is a decent 2400mAh battery. Talking about the camera, it has 13MP Rear Camera with f/2.0 and up front it holds a 5MP camera with f/2.7 aperture. But bear in mind that this phone runs the dated Android 5.0.1  and has a 5-inch screen. Check out our review of the ZTE Blade S6 here.

The phone priced at Rs. 14,999 sports a 5-inch HD IPS LCD display and powered by a 1.4GHz Quad-core Snapdragon 425 processor with 2GB of RAM and Adreno 308 GPU. It runs on Android 6.0.1 Marshmallow out of the box with MIUI8 on top. The device has a 13-megapixel rear facing camera with 5MP at the front. The good thing about this phone is that it has a big 3,120 mAh battery. You can check out our review of the Redmi 4A here.

Nokia 3 is the low-end Android-powered released recently in Nepal. At the front, the device sports a 5-inch display which ends in a 2.5D glass arc. The highlight of the Nokia 3 is the Android v7.0 Nougat it runs on. It has a small 2,650 mAh non-removable battery. A Quad-core MediaTek 6737 processor powers the Nokia 3. The Nokia 3 comes with a polycarbonate back like those found on the Lumia phones.

Check out our full article of top phones under 15,000. Click Here!