In this review, I will be taking an in-depth look at the OnePlus Nord 2T. If you remember, last year’s Nord 2 and the first-gen Nord before it were a couple of very good mid-range phones. So naturally, you would expect its next iteration to also live up to those standards, right? But the Nord 2T is basically the same phone as the Nord 2 with just a few little changes. So, is the Nord 2T a good offering despite the tiny upgrades over its predecessor?

Okay, on to the review, I have been using the OnePlus Nord 2T as my primary phone for just about 2 weeks now. And there are a few things about it that I appreciate a lot, like the well-built design.

Although its form factor is very similar to the Nord 2, that is not something I would complain about, honestly. It’s such a comfortable phone to use, whereas its glass finish, as well as the slightly curved back, feel great on the hands too. Also, I cannot emphasize enough how much I love the alert slider.

I mean, it comes so handy when you’re in meetings and you forget to keep your phone in silent mode (which happens to me every time). You just switch the slider and your ongoing conversation goes undisturbed. It just looks very professional, in my opinion.

What’s with that camera module?

The only thing I am not okay with is these camera modules. If you look at it closely, they look so randomly placed! I mean, symmetry can just rest in peace; I think the Nord 2’s camera placement was way cleaner and I would not have complained if they had done something similar here too.

Also, I would like to highlight the fact that this back catches fingerprints quite easily. So if you use the phone without a cover as I do, you will be doing this all day. For durability, OnePlus has included Gorilla Glass 5, both on the front and back of the Nord 2T. Likewise, the power and volume buttons here have a very nice, tactile feedback which has made interacting with this device quite satisfactory.

Besides good design and solid build, the performance on this thing is pretty reliable too. Now, technically, the performance jump from Dimensity 1200 chipset to Dimensity 1300 is not that significant, but I think OnePlus has made some improvements in terms of optimization and thermals with the Nord 2T. Here, I tested some popular games like PUBG where I was able to get stable 40 fps in the highest possible settings (HDR+Ultra), while it also maintained an impressive 60 fps mark at Smooth graphics and Extreme settings.

The phone is also optimized to play some of the high fps games like Mech Arena at 90 fps where I got 87 to 89 fps on average, even in the Ultra graphic profile.

I also tried playing the newly launched Apex Legends on it, where I got respectable results. It was only when playing GPU-demanding games like Genshin Impact that the device showed some signs of distress. At the highest settings with 60 fps mode turned on, the game would hover around just 30 fps with frequent stutters.

So, you’ll need to turn down to medium graphics for stable gameplay where the fps mark is still around 30 fps only. But the stability this time is so much better. And yes, the OnePlus Nord 2T would heat up to about 41°C when playing Genshin Impact for about 20 minutes or so. But with other games, it would remain relatively cooler.

Other normal tasks including heavy multitasking and app opening are superb with no hiccups whatsoever. The typing experience is quite nice too and so is the vibration feedback. It’s strong enough so that you don’t miss your phone calls, but it’s irritatingly buzzy either. However, I did notice that there’s a bit of an aggressive battery optimization going on here, which would kill background processes after a while. But except that, the overall performance has been satisfactory, and that’s partially also due to the well-optimized OxygenOS.

And talking about OxygenOS, I feel like OnePlus has been getting a lot of unnecessary hate because of the whole OnePlus–Oppo merger thing. But for me, the overall usability hasn’t really changed that much.

Yes, there are a couple of minor UI tweaks in the settings and camera app for example, but that’s all there is. Those core OxygenOS functions are still here, it’s still ad-free, and there are very few bloatware apps, so I wouldn’t make a huge fuss about the merger, at least for now. By the way, OnePlus has also pledged to provide 2 years of OS and 3 years of security updates here, which is nice.

On the display side of things, well it’s pretty much the same stuff as the Nord 2. You get the same 6.43-inch AMOLED screen with a 90Hz refresh rate and HDR10+ certification on the OnePlus Nord 2T. 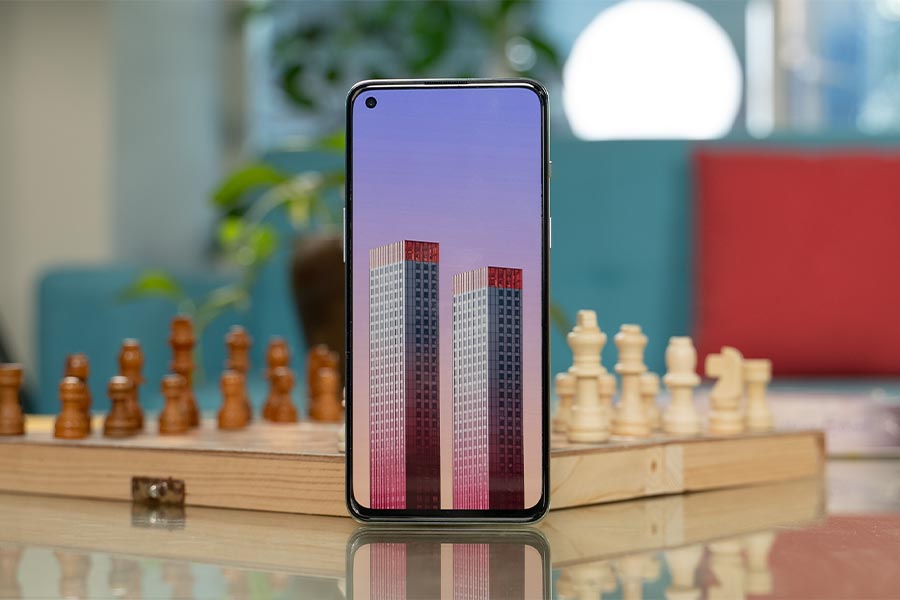 It’s a quality screen to look at with nice colors, contrast, and brightness levels. And since the company has optimized the 90Hz refresh rate quite well, I haven’t faced any jitters or micro stutters on this phone either.

Now, one might argue that it’s not a 120Hz screen, so it won’t be as smooth. But I haven’t felt much of a difference honestly. However, I would have liked it if there was an auto-refresh rate option in the settings.

So during my usage, I had to set the display to 90Hz all the time, which in turn resulted in just average battery life and I always had to charge my phone before leaving my office for home at around 8 PM. But since my smartphone usage pattern is quite demanding, this is common for me. Therefore, if your usage is a little less taxing, then this phone should easily last you an entire day. On the plus side, its 80W charger only takes around 30 minutes to fully juice this device. That means even if your phone dies in the middle of the day, you can fill it up within a matter of minutes!

Ok, getting to the cameras, we get a very similar triple camera setup that consists of a 50MP Sony IMX766 primary lens, an 8MP ultra-wide, and a 2MP depth sensor.

We have seen the IMX766 at work in many other devices, like the Realme GT 2 Pro, GT Neo 3, and even the OnePlus Nord 2, so we know that it’s a reliable sensor. As a result, the Nord 2T does well in the camera department.

I also gotta appreciate how OnePlus has not gone with overly saturated optimization. Instead, its images have a very digestible level of vibrancy. Having said that, the phone does boost contrast by a bit.

Likewise, the contrast looks slightly boosted in portrait images too and the camera seems to brighten the subject a bit. But since the end results look pleasant, I wouldn’t complain much about it.

Selfies from the 32MP camera are acceptable too. They look slightly pale in comparison to the primary images but are good enough for their class.

I am impressed with the OnePlus Nord 2T’s nighttime shots too, as even without the night mode turned on, it manages to capture well-detailed shots. Turing on night mode makes the exposure and detail levels even better.

However, as with most midrange phones, its ultra-wide camera is strictly average.

It fails to deliver a good dynamic range, there’s distortion around the edges, and detail levels are just subpar as well.

As for videos, the Nord 2T can shoot up to 4K 30 fps videos from the back camera. But despite the onboard OIS, the stabilization is not so good at this resolution. And the selfie videos are still capped at 1080p 30 fps, which is something OnePlus needs to improve by quite a bit.

Lastly, something that I am not impressed with OnePlus Nord 2T is its speaker quality. They’re loud, yes, and there is no distortion in the highest volumes either. But the highs sound very sharp and the overall audio doesn’t sound balanced. They’re okay for casually watching movies and stuff, but if you listen to a lot of music, you will find its audio quality to be just average.

Okay, so from everything that I have discussed so far in this review, you must have guessed that the OnePlus Nord 2T is a good phone in its class. And if you buy this phone, you won’t regret it, experience-wise. On the other hand, the phone is quite overpriced in Nepal. But at the same time, while using the Nord 2, I kept questioning myself if it was an unnecessary addition to OnePlus’ portfolio, to begin with.

I mean, it’s basically the same as the Nord 2 in almost every aspect. I think it would have been better if the company had skipped this phone altogether, and brought the OnePlus Nord 3 instead with upgrades such as a 120Hz screen, a better ultra-wide sensor, some quality of life improvements in terms of battery life, and a 4K selfie video recording option!