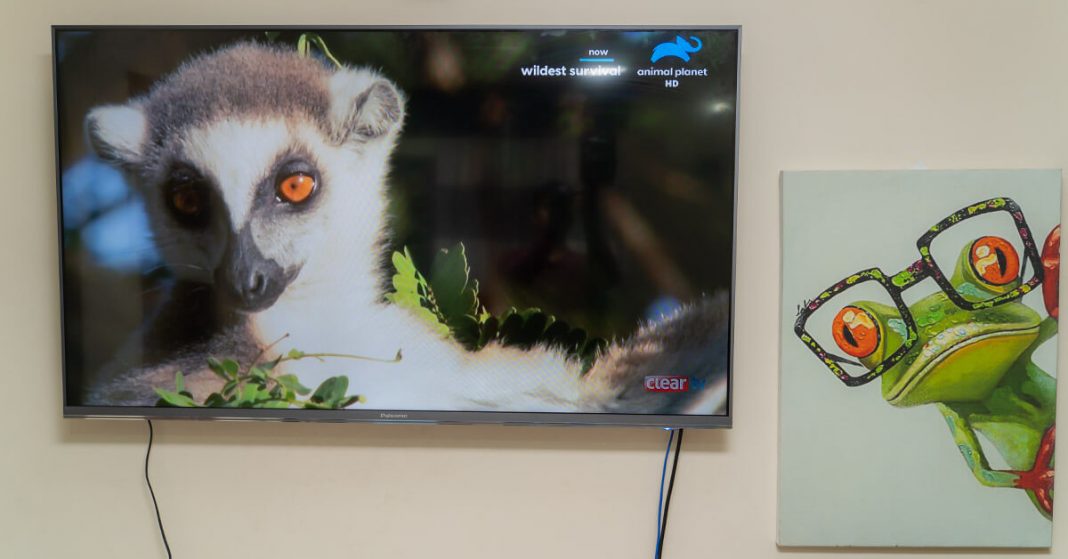 When it comes to televisions, premium brands like Samsung, LG, and Sony always come on the top. And they promise quite a lot in terms of design, build, and picture quality. Although such brands may be impressive by all means, they are also really expensive on the purchase. So we eyed a number of underdogs that do not cost much like the premium brands but promises a similar offering. In that context, we had already reviewed the Yasuda 55-inch 4K Smart LED TV (YS-55UC3), which had a decent offering for the price. But this time, we found Palsonic 55QX7000 as a better contender than the Yasuda TV we reviewed earlier. Palsonic is an Australian brand with quite a reputation in the market. But how good is its TV to watch content on a daily basis? We tried to find out in this review.

In terms of design, the TV looks quite attractive, all thanks to its thin bezels. But on comparing the bezels on the top and on the bottom, the bezel on the bottom is slightly thicker. That’s because Palsonic has put on its branding on the chin. Beneath the branding, there are two metal strips, which run from left corner to right. And that seems quite fancy in terms of looks. Furthermore, you get a metallic frame on TV with which the television looks premium.

But this is quite heavy and you will notice it when you had to carry it to change its place or while mounting it on the wall. We found it even heavier than the Yasuda YS-55UC3 TV. That may not be a deal-breaker for the most, but there is that. But with heavier weight, the TV gives the vibe of premium quality.

The Palsonic 55QX7000 is a smart TV based on an Android OS. It comes with Android Marshmallow (v6) out of the box. But unlike other TVs, the UI here is quite different. You get a Floating UI on this television with which the TV contents don’t get obstructed while navigating through the UI or accessing any feature. And I found that genuinely impressive. But despite being an Android TV, this television doesn’t have Google Playstore in it. Palsonic rather has its own App Store here. And what’s good about this App Store is that unlike Google Playstore, which has apps and games for smartphones and tablets, it just has TV channel apps and video streaming apps like NetFlix, YouTube, Hotstar, etc. So it’s really easy to search for apps in the App Store. You won’t get lost in there.

And talking about the UI, the UI here is quite smooth. Since the TV has a Dual-core processor and 1.5GB RAM, I was expecting lags here and there. But Palsonic 55QX7000 gave me a pleasant surprise on that part. The TV remained fast and smooth throughout my review period.

As for the apps, the TV comes pre-installed with apps like YouTube, Hotstar, Yupp TV, etc. But these apps can be uninstalled pretty easily. You also get the Prabhu TV app here, which, however, cannot be uninstalled. Since this TV comes aboard with 4GB of internal storage and such apps doesn’t require much of a space, I didn’t find it worrying. I was able to add a few more apps on my own without any issues. But what got me really impressed is the feature called FastCast. With this feature, you can cast the contents on your phone easily to the television. When you are with your friends and family, you can show photos and videos and share the memories through the big screen of this television. In addition to that, you can also play music through the TV using your phone, if you want louder audio. Although the feature sounds good and is also impressive to play music and photos, it’s not the same while playing the videos. The videos ran with buffers here and there. Because of that, my experience wasn’t as delightful as I expected.

On the connectivity front, this TV offers quite a lot of options for input/output interfacing. You can find Antenna input port, AV-in port, S/PDIF, and LAN ports. In addition, there are two USB 3.0 ports and three HDMI ports. 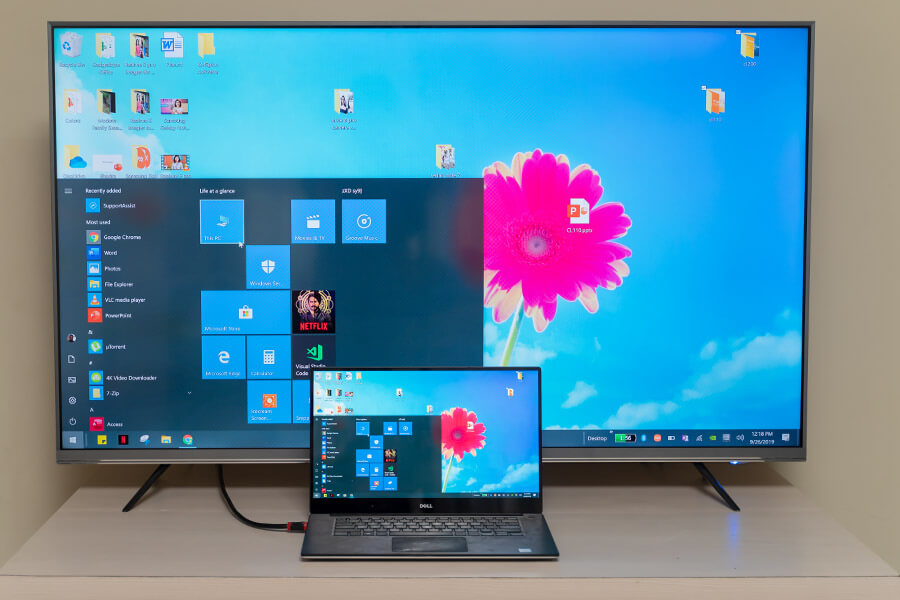 By making use of the HDMI port, you can use the TV as a monitor by connecting it with your PC. You can also connect it with your PlayStation or Xbox to play videos games on its big screen. HDMI port also let you connect your TV with a set-top box with which TV shows can be watched directly from the respective TV channels. Similarly, the USB ports let you plug in a thumb drive/pen drive and watch 4K movies with it. Furthermore, with the S/PDIF port, you can connect Soundbar and multi-channel home theater audio systems. That was connectivity through the wired means. On the wireless side, there are Wi-Fi and Bluetooth options. When it comes to Bluetooth, you get two options here: TV Mode and Phone Mode. By turning on the Phone mode, you can pair your smartphone with the TV and play songs by treating your TV as a speaker. This feature can come in handy if you are with a group of friends for gatherings and don’t have a good enough speaker to amplify the audio. Similarly, by turning the TV mode on, you can pair your television with a speaker or a soundbar for the audio output.

Talking about the Wi-Fi, the connectivity is really impressive here. On YouTube, 4K videos run on 1080p or 1440p by default. If you wish to watch 4K videos without any buffer, you can do so by plugging in a LAN cable. So I have got nothing to complain on the connectivity part.

Let’s now talk about the most crucial part of a TV, its display. And talking about the display, you get a 55-inch LED-backlit LCD panel with 4K or Ultra-HD resolution. Since it’s a Smart TV, we spent most of our time on this TV by watching videos on YouTube. And as it has a big display with rich resolution and surrounded by narrow bezels, the contents really looks immersive here. Even while watching 4K videos from a close distance, objects look quite sharp. But since broadcasting of TV channels in UHD resolution hasn’t been mainstream, we just get HD resolution at best here. And such channels don’t look sharp enough to consume multimedia content. So while watching HD channels, you need to maintain a distance of 3.3 meters or more to avoid any sort of pixelation. 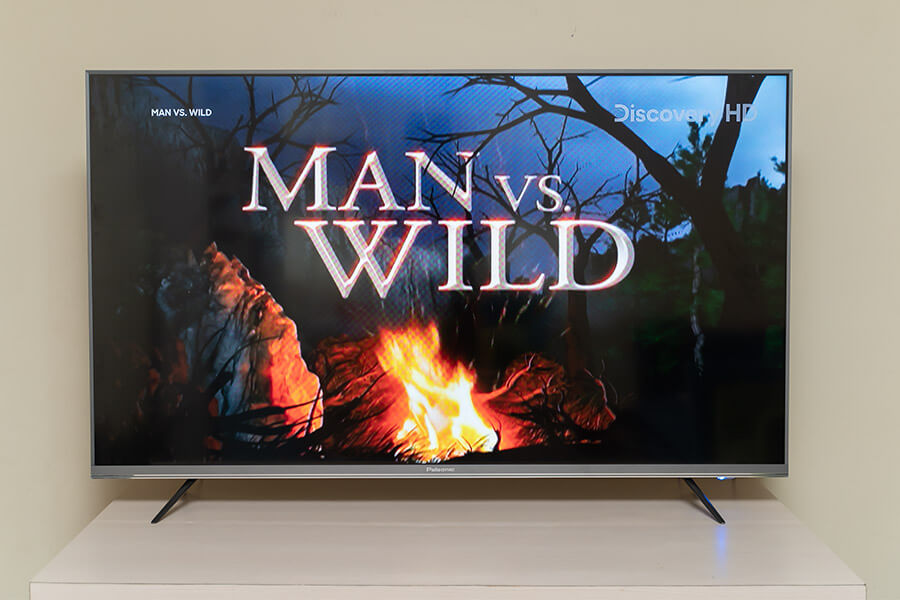 Continuing with the display, the colors look impressive here. You won’t find washed colors or any sort of oversaturation here. And since the display here is HDR enabled, you get an amazing dynamic range and high contrast ratio. Palsonic told us they have used an A+ panel from LG on this TV. And that could be the reason for such an impressive display. Although the display is great for the price, it’s not quite comparable with the flagship TVs from premium brands like Samsung, Sony, and LG. So there is that.

On to the audio front, Palsonic has used Onyx speakers. So I had quite an expectation from the device when it comes to sound. But on my test, I found the sound quality to be barely average. The audio from the device sounds shrill and quite unpleasant. The volume can go really high though. But at high volumes, you will start to notice distortions.

But that’s not all. Even the bass doesn’t sound quite as pronounced. So if you are an audiophile and conscious about the audio quality, you should have to get a high- quality soundbar or a home theatre speaker system.

Like all the televisions out there, you also get a remote with this TV. And the good thing is that Palsonic has also included batteries for the remote inside the box.

Talking about the remote, the remote of this TV is unusually large. And that’s because of the additional features here. Like, there is a button to turn on the mouse, which eases you to navigate while accessing the features or selecting the right video on YouTube. 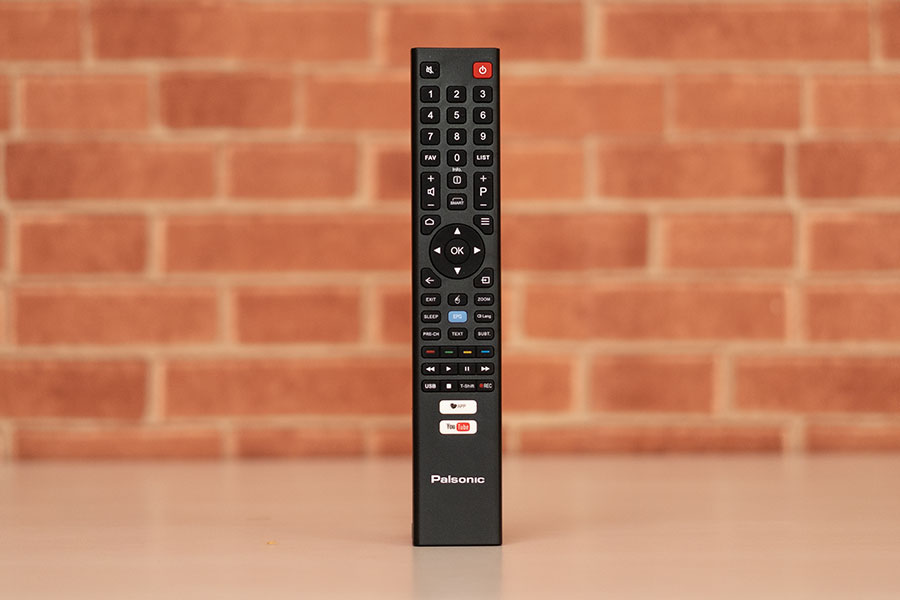 Similarly, there are dedicated buttons to access the App Store and YouTube. And it can be really handy if you frequently watch YouTube videos. But typing the text to search videos on YouTube or on typing on the App Store, it’s rather cumbersome. There are no dedicated keys for it and you have to do so by using the arrow and “OK” buttons. And it can be really frustrating if the text you have to type is long. You can, however, evade the problem by connecting a keyboard and a mouse on the USB ports. But since using a keyboard and mouse to watch a TV isn’t really convenient, I think Palsonic should include an easier way to do so on its upcoming televisions.

Furthermore, despite being a smart TV, the TV remote doesn’t have an in-built mic or a dedicated button to trigger the Google Assistant. So don’t expect to do voice searches as well.

To conclude, I found the Palsonic 55QX7000 TV genuinely impressive, especially, for the price. It has got a slim form factor, impressive build quality, and even the display here looks amazing. The TV also flaunts an commendable Wi-Fi connectivity with a ton of other options on the connectivity front. In addition, there are several other features to improve our TV viewing experience. 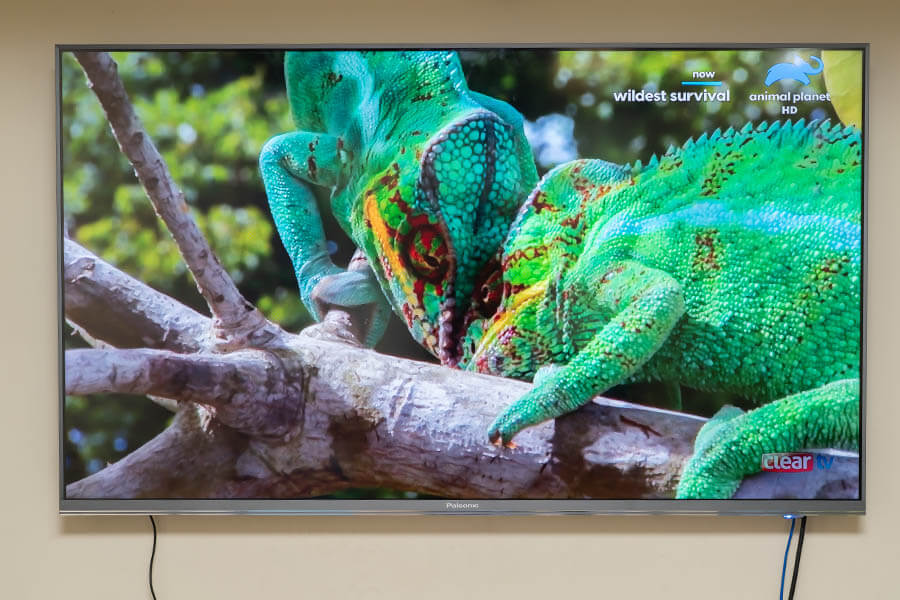 Yes, the audio is not of the best quality. But such kinds of tradeoffs are usually found on all the budget TVs out there. So for the price of under 1 lakh, I found the Palsonic 55QX7000 TV to be one of the leading contenders and you really can’t go wrong with this one.